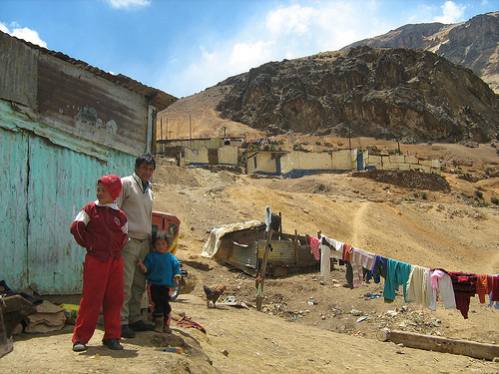 The residents of the town of Morococha in central Peru will be displaced to make way for mining operations by the Chinese company Chinalco. Credit: Milagros Salazar/IPS

LIMA, Jul 31 2012 (IPS) - A random review by the Peruvian government of 205 environmental impact assessments approved between 2001 and 2010 revealed that 86 percent lacked complete information on how they had received the green light from the authorities.

In 60 percent of the 205 cases analysed, the incomplete information referred to dissemination and citizen participation; in 74 percent, to the admissibility of the studies involved; and in 95 percent, to the way in which the terms of reference for their implementation had been approved.

These environmental impact assessments (EIAs) are merely a sampling, representative of different economic activities, of the 2,360 that the Peruvian government approved between January 2001 and November 2010, and 62 percent correspond to the mining and energy sectors, as reported in May by the vice minister of Environmental Management at the Ministry of Environment, Mariano Castro, during a meeting in the Peruvian Congress.

Civil society has put forward proposals to confront this problem, while the government has pledged that changes will be made.

Since January 2006, as of this month, 211 people have been killed and 2,700 wounded in social conflicts, most of them environment-related, according to the Ombudsman’s Office of Peru.

During President Ollanto Humala’s first year in office, which ended Jul. 28, there were 15 deaths and 430 people wounded in protests. In response to the outcry over this situation, which was stepped up after five people were killed earlier this month in protests against the Conga gold mining project, Humala announced a new relationship with the mining industry, the country’s primary source of foreign currency.

Conga, a mining project headed up by the multinational corporation Yanacocha in the northern region of Cajamarca, has been the target of especially fierce opposition because it will entail the destruction of four high mountain lakes. The resulting unrest forced the government to submit the EIA for the project to an international expert review.

This review concluded that two of the four lakes were to be emptied out to extract the gold, while the other two would be used to deposit the earth and rock removed.

But no detailed hydrological or hydrogeological studies were carried out for the project, even though they are essential to prevent leakage of toxic waste. Nor was an integral study of the micro-basins that could be impacted by the mining activity carried out, and the local communities that would be affected were not all informed about the Conga gold mining project.

Civil society organisations have submitted proposals to the Ministry of Environment for improving the government’s environmental assessment system.

The Peruvian Environmental Law Society (SPDA), for example, has just published a book by lawyer Isabel Calle which sets out seven specific recommendations.

One calls for the creation of a technical body, attached to the Ministry of Environment, to review and approve EIAs for projects in all sectors of the economy.

Currently, each ministry has its own unit responsible for both the approval of environmental studies and the promotion of investment in its particular sector.

“Unfortunately, the public does not trust in the impartiality of the government and believes that these ministries will always take the side of the companies,” Calle told Tierramérica*. “But if this review process is taken over by the ministry that is responsible for the protection of the environment, it could be considered a good sign.”

The creation of this technical body was discussed by a multi-sectoral committee established in early July to improve the environmental and social conditions in which productive activities are developed. The committee is expected to submit a proposal for reform of the system in early August, Vice Minister Castro told Tierramérica.

Castro and the SPDA concur that that the transfer of this key function to the Environment Ministry must take place gradually, to ensure that it is not overburdened with work.

“If these recommendations are incorporated into the system and help to reduce damages and take better advantage of opportunities, everyone will benefit,” said Castro. “A reform would improve the quality of decision-making, contribute to building trust, and reduce uncertainty and conflict.”

Companies are not opposed to these changes, as long as the 90-day deadline for the approval of EIAs continues to be respected, said the director of environmental responsibility at the Peruvian branch of Canadian mining company Barrick Gold, Gonzalo Quijandría.

“It is fine for these state bodies to monitor us, but they must demonstrate their technical quality. For companies it is important that any new initiatives do not cause delays,” Quijandría told Tierramérica.

Among the key aspects are the terms of reference: the technical specifications, objectives and structure that every EIA should have. The SPDA calls for monitoring these more closely.

The organisation also recommends that baseline studies – the initial measurements of all indicators that could be affected by the project in question – should include information on contingency areas and fragile ecosystems, specific measures for the prevention, mitigation and remedy of potential damages, and a plan for social inclusion and environmental compensation, among other aspects.

The social inclusion plans proposed by the SPDA would involve the joint undertaking by the companies and the government of efforts to ensure that poor communities living near mining areas have access to basic services and employment.

At a meeting in July 2010, officials from the department of mining-related environmental affairs pointed out to company executives that numerous EIAs conducted by consulting firms contained entire paragraphs copied from other documents, which reflected a lack of seriousness in the assessment of potential impacts, as revealed in a report by IDL-Reporteros, an independent group of investigative journalists.

Quijandría admitted that there are assessments “of all kinds” but said that companies are willing to improve their quality. However, “even if we have a study conducted by a Nobel Prize winner, the public will still not trust it, because they are politically inclined not to,” he claimed.

Environmental lawyer Calle believes that requirements should be established for the technicians who carry out the assessments, and that failure to fulfill them should lead to penalties that could even include the suspension of the project, in the event of irregularities such as plagiarism or the under-reporting of potential impacts.

The SPDA is also calling for the establishment of a fund that would allow communities to hire technical consultant services, as well as a single point of contact or “one-stop shop” for all permits, authorisations and other procedures required for environmental certification.

Other recommendations include giving regional governments the authority to submit technical opinions on EIAs, and coordination among different government bodies to prevent the overlapping of rights and concessions in the same place for ecotourism, conservation or forestry activity.

For his part, Castro stressed the need to update the regulatory framework, environmental quality standards and maximum permissible limits for particular substances in certain sectors; to establish protocols and methodologies; and to standardise the criteria for EIA review and approval.

But Cecilia Rosell, manager of corporate social and environmental responsibility at Peru’s National Society of Industries, believes that environmental impact assessments should not be the sole focus, because there are other instruments for environmental and social management that should be taken into consideration.

For Manuel Glave, head researcher from the Analysis for Development research centre, the changes should be incorporated into a broader land management plan, because access to and use of natural resources are at stake.