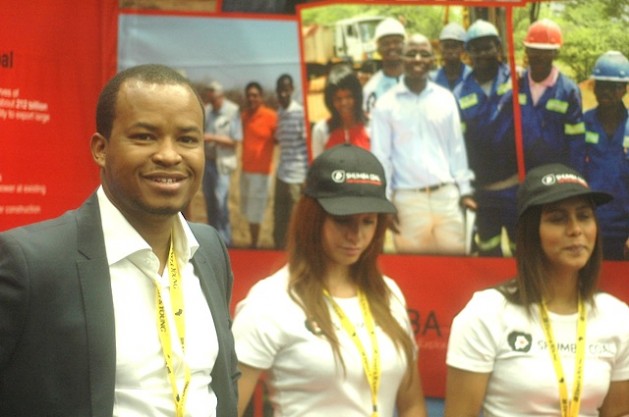 Thapelo Mokhathi, a young South African with a decade of experience in the mining industry, is now finance director of Shumba Coal, a junior coal explorer operating in Botswana. Credit: Gavin du Venage/IPS

CAPE TOWN, South Africa, Feb 14 2013 (IPS) - A calamitous year in mining has left many wondering whether it should still have a part in South Africa’s future. Illegal strikes, including one that left 47 people dead near Marikana in the northwest of the country, soaring costs and depressed world commodity markets have left the industry in its worst crisis in years.

“The perception of South Africa as a dangerous and difficult place in which to do business was brought home by Marikana,” David Butler, managing director for Southern and East Africa at Control Risks, a United Kingdom-based strategic analysis company, tells IPS. “But the underlying problems have been there for some time – it took an incident like this to bring them out into the light.”

The strike at the Lonmin-owned platinum mine in Marikana, in South Africa’s North West Province, made international headlines after 34 miners were shot dead by police after protests turned violent on Aug. 16. The death toll later climbed to 47.

“Violence is usually pretty low on the scale of factors that investors look at, while infrastructure – or lack of it – is usually much more important,” according to Butler. “But what Marikana did was expose the government’s inability to provide support for big projects. A lot of the problems in the area came down to lack of basic infrastructure and local government support.”

Analysts looking at investment destinations will usually pay more attention to hard figures and less to incidents of violence, he notes. However, this does not mean events such as Marikana will not influence the ultimate decision over whether to invest in a country or not.

“Analysts work on risk, and have models to work from. But the people sitting in the boardroom, who have to make the ultimate decision, will still be impressed by what they see on the telly,” says Butler.

Infrastructure, he stresses, is also a slippery variable. Although well supplied with roads, rail, port and power by African standards, South Africa is now far down the list for mining investment, lagging behind countries such as the Democratic Republic of Congo (DRC).

“The investment cycle in South Africa is 20 to 30 years, similar to that of other mature mining jurisdictions such as Canada or Australia, but with a much higher risk profile,” Butler says.

“The DRC, on the other hand, has an investment cycle of less than 10 years. Investors go in, quickly begin operations and leave. They bet on making profits in a short time cycle, so it’s much cheaper, with less risk, than investing in South Africa.”

He adds that South Africa’s ability to manage labour relations was now also in doubt. “People are now wondering whether the country has effective collective bargaining mechanisms,” he says. After Lonmin agreed to pay raisesof up to 22 percent, workers at nearby mines called for similar pay increases. 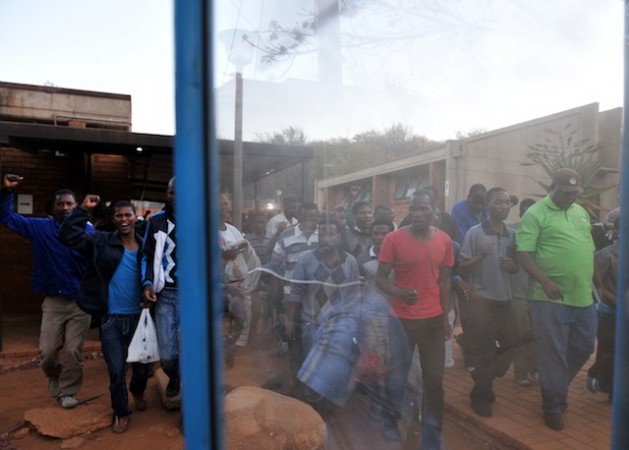 Striking Marikana miners who were given pay raises of up to 22 percent. Credit: Nat Nxumalo/IPS

The descent of South Africa’s mining industry has been swift. In 2005 the country was still the world’s largest gold producer. By the end of the decade, it had fallen to fourth place behind China, Australia and the United States, as its ageing reserves declined and required ever-deeper mines to access what is left. In 1970 it was producing 1,000 tonnes a year of gold – today it manages less than 200 tonnes.

Declining gold production had less of an impact than first feared, as platinum group metals (PGMs) were soon on track to take over the lead and create an entire new sector in the process. South Africa now produces 80 percent of the world’s PGMs, which are largely used in vehicle exhausts to remove emissions.

Averaging around 450 dollars an ounce for most of the 1990s, platinum began a steady climb at the turn of the millennium, reaching an all-time high of 2,253 dollars in March 2008. The large producers, Anglo Platinum and Impala Platinum, among others, initially enjoyed spectacular returns. However, years of above-inflation wage hikes, soaring power costs and falling demand in recession-struck Europe have left the mines struggling.

With an astounding 2.5 trillion dollars of minerals still in the ground, according to Citibank, the country could potentially be in the same position as the cash-flush oil states of the Persian Gulf.

But South Africa is expected to receive only 1.2 percent of global mining investment this year, while traditional rival Australia is expected to haul in 26 percent, according to Deloitte.

“The investment pipeline is not what it should be,” Abrie Olivier, southern African mining leader at Deloitte, says in an interview with IPS.

Although talk of nationalisation, which has dominated the industry for the past few years, has now waned following the ruling African National Congress’ electoral convention in December, during which state ownership was ruled out, investors are still not entirely convinced.

“We need more certainty and clarity on policy,” says Olivier. “We are dealing with the same problems the industry faced five years ago. Very little has changed.”

The pressure from unions to negotiate above-inflation wage increases has also pushed mines over the edge of profitability: “I don’t think the unions get it, but then, I suppose it’s their members who have their jobs on the line.”

The government’s threat to withdraw mining licenses in retaliation to Anglo American Platinum’s announcement in January that it would cut 14,000 jobs, has been another factor adding to the industry’s wariness over future investment, according to Olivier.

“Mines are good at controlling costs – they have to be. When it comes to jobs, hard decisions need to be made, particularly where marginal operations are concerned.”

It may be a stretch to say the mining industry is giving up on South Africa. But, for South African miners at least, the future appears brighter elsewhere on the continent.

Thapelo Mokhathi, a young South African with a decade of experience in the industry, is now finance director of Shumba Coal, a junior coal explorer operating in Botswana. He has pinned his hopes across the border, he says, because of an easier regulatory environment and one where small companies enjoy the same governmental attention as larger players. It also has large untapped reserves of coal.

“South Africa is a mature market that has been operating for a hundred years or more. There are no blue skies opportunities,” he tells IPS.

Eventually Shumba intends to generate power from its coal reserves and sell it to the region – something else that would be difficult to do in South Africa’s heavily regulated energy sector where the state-owned utility Eskom enjoys a legal monopoly.

“For entrepreneurs the obvious conclusion is to look at other countries outside South Africa,” Mokhathi adds.