BANGALORE, Mar 21 2013 (IPS) - A state-of-the-art nuclear medicine hospital for cancer treatment in the heart of Bangalore goes well with the global image of this tech-savvy city. 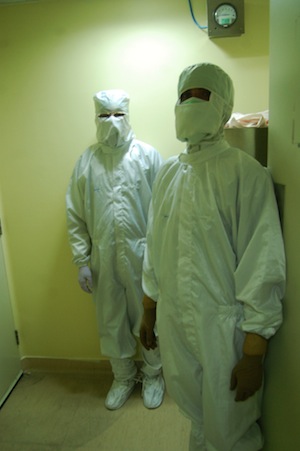 The HealthCare Global (HCG) hospital is equipped with facilities to manufacture and trade in nuclear medicine and offers the advantage of easy access for cancer patients.

However, locating such a facility in downtown Bangalore has its risks, particularly as a potential source of radioactivity that could affect residents in the surrounding, densely populated slum, or diners at two nearby restaurants.

Given that the International Atomic Energy Agency (IAEA) itself plainly states that standards for nuclear medicine differ from state to state, it is not at all an easy task to regulate or standardise radiation or leakage in terms of millisieverts per year.

The problem is made worse by the fact that India’s Atomic Energy Regulatory Board (AERB), tasked with monitoring nuclear applications throughout the country, is funded by the Department of Atomic Energy (DAE) – the very department the AERB is expected to regulate.

Although headed by the Indian Prime Minister, the DAE does not answer to the Indian Parliament.

This compromise in independent regulation has many implications, but Indian scientists and medical professionals are particularly concerned about its impact on the nuclear medical sector.

“Advanced diagnostic laboratories and multi-speciality hospitals that use nuclear applications like radioisotopes in nuclear medicine, X-rays, mammography, etcetera, are all sources of radioactivity,” says Dr. Udaya Kumar Maiya, oncologist at the Bangalore Hospital.

“Adequate safety and security protocols with rigid usage norms are essential for prevention of harm to the general public, patients and the environment,” he told IPS. If the sector is “callously managed” the results could be “catastrophic”, he cautioned: a single radioisotope has the capacity to harm millions of people through contamination or radiation exposure.

As Dr. Guru Shankar, medical superintendent at the Victoria Hospital, the premier government medical college hospital in Bangalore, pointed out, “Even if one technician forgets to give protection to the reproductive organs of patients who are subjected to multiple exposures (for treatment) it can lead to destruction of reproductive organs like ovaries or testes.”

Though Shankar — who also serves on the district disaster management committee of the National Disaster Response Force — has not come across anyone who has crossed the “threshold of high radioactivity in the 34 years that I have served in government hospitals”, he is aware and concerned about possible dangers.

Nuclear medicine and radioactive sources have potentially hazardous effects if they inadvertently escape into the surrounding area, particularly in urban settings. Over-exposure to mammography – particularly for technicians – can also lead to a higher susceptibility to cancer.

“The (spurt) of unplanned growth in urban areas like Bangalore is a recipe for disaster. This is where the role of the AERB is crucial,” Maiya added.

However, director of the Pet CT Cyclotron at the HCG hospital in Bangalore, Dr. Kumar Kallur, assured IPS in an exclusive interview that nuclear medicines are perfectly safe and well regulated.

“The radiation is contained within the cyclotron vault and it never escapes. Moreover isotopes produced have a very short life span – anywhere between two minutes to two hours, necessitating easy access in a place like (downtown) Bangalore.

“Cyclotrons (used in the manufacture of nuclear medicines for cancer treatments) cannot be installed without AERB approval, which monitors every single aspect of the cyclotron operations during peak performance.”

He added that cyclotron licences are only issued upon strict inspections of location, disposal mechanisms, manufacturing facilities  and trained staff, and that the hospital itself is expected to produce quarterly safety analysis reports for submission to the Board. “The AERB makes surprise inspections. At the slightest hint of radiation leakage the operations will completely stop,” Kallur stressed.

“Patients who have undergone nuclear medicine therapy are admitted to AERB-approved isolation wards. Even the human waste generated by such patients is subjected to delay and decay in tanks that are tested periodically before the sewage is discharged into the public sewage system,” Kallur assured IPS.

But others are not convinced and some experts have gone so far as to label the regulatory process a “farce”.

In his recently published book “The Power of Promise” physicist M.V. Ramana charged, “The AERB’s effectiveness is constrained by the Atomic Energy Commission’s (AEC) choice of institutional structure. Rather than make the AERB independent of the Department of Atomic Energy (DAE), the AEC made the AERB report to itself.”

He also lamented the fact that the secretary of the DAE is the ex officio chairman of the Atomic Energy Commission, which effectively allows the DAE to exercise administrative power over the AERB.

“Until recently, the chairman of the Nuclear Power Corporation was also a member of the AEC,” he wrote.

“The AERB’s budget comes from the DAE. All these factors place structural limits on the AERB’s effectiveness,” Ramana told IPS.

He went on to add, “The AERB does not carry out any monitoring of essential performance metrics such as radiological exposure of workers at DAE facilities or measurement of levels of radio nuclides in the vicinity of nuclear facilities.” Instead, these tasks are “entrusted to the Nuclear Power Corporation of India Limited and the Bhabha Atomic Research Centre in Bombay”.

Scientists here feel the government should undertake disaster prevention measures such as establishing evacuation points, frequent broadcasts of “Dos and Don’ts”, better training for investigative officers, designated arterial routes for mass evacuation and easy access to first aid in the event of an accident, or disaster.