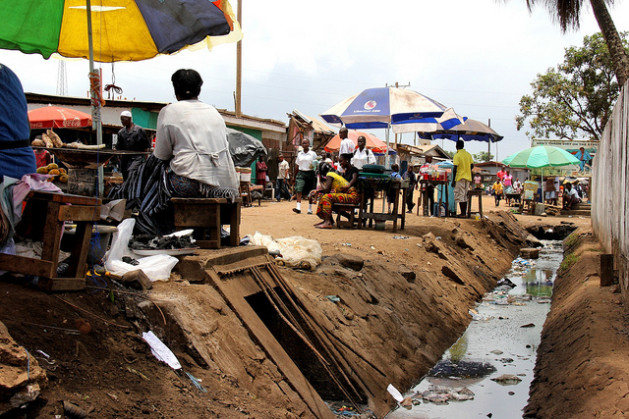 UNITED NATIONS, Mar 19 2013 (IPS) - When the General Assembly unanimously adopted the Millennium Development Goals (MDGs) back in 2000, water and sanitation were reduced to a subtext – never a stand-alone goal compared with poverty and hunger alleviation.

Now, as the United Nations begins the process of formulating a new set of Sustainable Development Goals (SDGs) for its post-2015 agenda, there is a campaign to underscore the importance of water and sanitation, so that the world body will get it right the second time around.

Ambassador Csaba Korosi of Hungary, whose government will host an international water summit in the capital of Budapest in October, says, “Sustainable development goals for water should be designed in order to avoid the looming global water crisis.”

“But the number of users have since increased by about 8,000 times,” he said.

With global food production projected to increase 80 percent by 2030 – and with 70 percent of water consumption flowing into the agricultural sector – Korosi said 2.5 billion people will very soon live in areas of water scarcity.

Addressing the Special Thematic Session of the General Assembly on Water and Disasters last week, Deputy Secretary-General Jan Eliasson was blunt: “We must address the global disgrace of thousands of people who die every day in silent emergencies caused by dirty water and poor sanitation.”

The theme of the Budapest water summit, scheduled for early October, will be “The Role of Water and Sanitation in the Global Sustainable Development Agenda.”

The summit will be preceded by a High-Level International Conference on Water Cooperation in Tajikistan in August and World Water Week sponsored by the Stockholm International Water Institute (SIWI) in Sweden in September, plus several regional summits and conferences in Asia, Africa and Latin America.

The meetings take place at a time when the General Assembly has declared 2013 the International Year of Water Cooperation – and even as the United Nations commemorates World Water Day next Friday.

Torgny Holmgren, SIWI’s executive director, told IPS that in a survey of U.N. member states on priority areas for post-2015 goals, food, water and energy were “a distinct top trio”.

For a second year in a row, he said, the water supply crisis was also among the top three global risks in the yearly survey by World Economic Forum in Switzerland.

“We are also seeing how water issues are being prioritised by actors outside of the traditional water community, most significantly from the food and energy sectors,” said Holmgren, a former ambassador and head of the Department of Development Policy at the Swedish Ministry of Foreign Affairs.

Amidst all this, he said, there is significant talking and thinking going on to develop new ambitions that will support the movement towards a sustainable and desirable world for all the so-called post-2015 development agenda.

“I am optimistic that the newfound awareness about the importance of water will be converted into far-reaching goals and targets on water as a resource, as a right and as a service,” said Holmgren.

John Sauer, head of external relations at Water for People, told IPS the United Nations took an important step to make water and sanitation a human right through a General Assembly resolution (64/292) in 2010.

Despite this effort, he said, its work to ensure lasting and affordable water and sanitation service delivery must evolve and innovate to meet the immensity of this challenge.

“As the U.N. shifts attention to the post MDG goal of universal coverage, monitoring should shift to ongoing service delivery,” he said.

This is critical to prevent the large number of projects that presently fail, Sauer noted.

“This means looking beyond projects funded, and beneficiaries reached, and instead looking at systematic capacity building within government, civil society and the private sector institutions. This also means creating stronger partnerships,” he said.

“If the U.N. could better demonstrate their impact, for example, by using indicators to show capacity built, this would be progress in the right direction.”

Together with non-governmental organisations (NGOs), the U.N. must rise to the occasion and increase transparency to reveal the true impact of their operations, he added.

Asked about the role of international organisations in resolving the impending global water crisis, Richard Greenly, president of Water4, had a different take.

He told IPS that organisations like the U.N. will always have little to no effect on the growing crisis in water and sanitation.

“But it is not for lack of very good intentions or much effort,” he added. “The fact is, we as a civilisation cannot give or grant another country into prosperity and health.”

It has never worked in the history of the world and it will not ever work in the water and sanitation crisis, he added. Every developed country paid for their own water development by developing water businesses, he argued.

“Commerce is the way out of poverty and although the U.N. is well-meaning, sustainable water development must be put in the hands of local citizens to solve their own water issues.”

What these people desperately need from the U.N. is the opportunity to develop their own water resources, he added.

Rather than a 10,000 dollar “donated” borehole or even 10,000 donated boreholes, they need the opportunity to develop their own way out like non-profit organisation Water4 (www.water4.org), which gives people the opportunity to hand drill water wells as a business for one-tenth the cost of a mechanised rig.

“This will allow rapid sustainable gains in the world water crisis,” Greenly argued.

SIWI’s Holmgren told IPS, “I am also seeing clear indications of both the need for and the openness to new collaborations and ideas.”

He said the post-2015 goals are being discussed as inclusively as our electronic means of communication permits. “We do see more cooperation emerging between governments, the private sector, academia and civil society.”

He said there are even cases where common ground for collaboration for a more water-wise world is found between competitors.

“It is of course most fitting that all these efforts are emerging during the International Year of Water Cooperation, and we at SIWI look forward to contributing even further towards improved cooperation and more concrete outcomes through the World Water Week on the same theme in September in Stockholm,” he added.