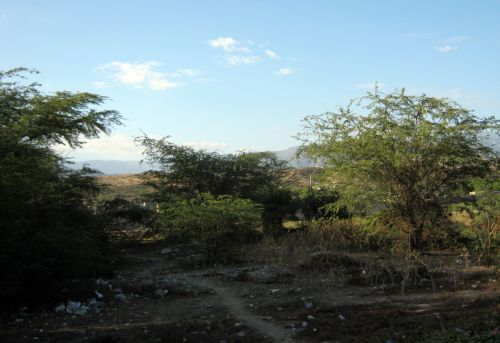 A field in Jacmel, near Port-au-Prince, which was devastated by the January 2010 earthquake. Credit: Patricia Grogg/IPS

PORT-AU-PRINCE, Apr 12 2013 (IPS) - In Haiti, a simple spring shower that would barely be noticed in most countries can cause devastating floods, due to the severe deforestation and erosion that impedes the absorption of rain.

And the increasing frequency and intensity of rainfall and other meteorological phenomena, which scientists say are affected by climate change, are aggravating this country’s already severe food security problems.

These risks are among the biggest challenges in developing sustainable agriculture, said Philippe Mathieu, a former agriculture minister and current adviser to the United Nations World Food Programme (WFP).

The expert said it was necessary to help small farmers obtain more resistant varieties of plants and production systems adapted to climate change, and to address problems like drought and tropical storms. “We also have to work with the community, train people in prevention,” he said in an interview with IPS.

Wilson Sanon, a popular educator and official with the Haitian Platform for the Defence of Alternative Development, concurred with Mathieu.

“To adapt to climate change that could accentuate the problems of the agricultural sector, farmers must receive training in agroecological practices, and people should be enabled to share their experiences at a local, regional and international level,” he told IPS.

But Sanon also said his country needed training of extension workers, land reform, access to soft credit, capacity-building for small farmers, grain storage and transport facilities, secure markets, and a 30 to 35 percent increase in customs duties to protect national production from the invasion of cheap imports.

“Small farmers need capacity-building,” said Mathieu. “What we need is a mix: intensive farming can be practiced on large swaths of public land, while small-scale farmers are given incentives to become more efficient by combining crops for family consumption with crops to sell or export.”

Agriculture accounts for a quarter of Haiti’s GDP and 60 percent of available jobs.

According to a report by Oxfam America, the agricultural sector in Haiti declined by four percent from 2000 to 2010 due to soil erosion, insufficient investment in irrigation and agricultural inputs, and the growing impact of climate change.

The indiscriminate felling of trees over the last two centuries was a direct cause of the degradation of about two-thirds of Haiti’s arable land.

This island nation’s mountains have been almost completely stripped of vegetation, and when it rains, the soil is washed downhill. The government hopes to increase forest cover from two to five percent of the national territory in the next three years, by means of a wide-ranging plan.

To bolster agriculture in such adverse conditions, Mathieu said the most important thing was to carry out programmes that combine a focus on the environment – such as the restoration of soils – with measures to boost productivity.

“Not enough food is produced for local consumption,” he added.

The WFP adviser said 55 percent of the food consumed by Haitians is imported, a direct consequence of the trade liberalisation policies that began to be implemented by dictator Jean-Claude Duvalier (1971-1986) in 1983.

These neoliberal policies, which are still in effect, led to a drop in agricultural output and revenue, he explained.

To increase output, Mathieu recommended crops suitable to the months outside of hurricane season, which runs June through November. He also suggested that small farmers adopt farming techniques, such as drip irrigation and greenhouses, that help mitigate risks.

He said the biggest efforts should focus on producing more, starting with areas where there is “a certain level of competitiveness,” such as cassava and sweet potatoes, to later integrate production in an agroforestry system that preserves the environment.

“From my point of view, the first thing is to increase yields, and at the same time, develop agriculture that protects the environment. Once that is ensured, a bigger challenge is to incorporate value-added into products, the benefits of which should reach small farmers,” he said

Mathieu explained that efforts towards that end had been put in motion, with good results. But he added that it was necessary to integrate them into a clear state policy.

“The Agriculture Ministry has documents on agricultural policy, although there is nothing concrete on the ground as yet,” he said.

He also stated that it was necessary to raise public awareness of the threats posed by climate change in a country that is highly vulnerable to extreme meteorological events and which has the highest poverty rate in the hemisphere. “People are not prepared to weather disasters that could be even worse in the future,” the former minister said.

He added that one of the main focuses of environmental education should be climate change.

“When people have to deal with so many challenges just to survive day to day, it’s hard to talk to them about problems that will be faced 50 years from now, like the rise in sea level. But sending out an alert and anticipating what lies ahead is a duty of the organised part of society and also the state,” he said.