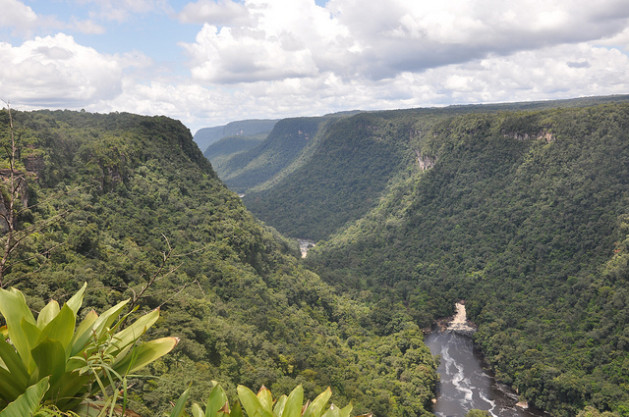 Carbon credits can be used to protect forestlands. About 80 percent of Guyana’s forests, some 15 million hectares, have remained untouched over time. Credit: Desmond Brown/IPS

WASHINGTON, Apr 10 2013 (IPS) - Nascent carbon emissions-trading exchanges in several countries are increasingly looking at options to interlink with one another, which advocates say would offer investors long-term stability, increase revenues for the development of renewable energy and strengthen corporate support for climate policy.

Yet critics warn that so-called cap-and-trade systems are inefficient and create incentives for polluting industries to continue with business as usual. They also warn that the new systems in the United States are dependent on mechanisms that adversely impact on poor and indigenous communities in developing countries.

The law is supposed to be creating incentives for innovations, whereas cap and trade merely allows the fossil fuel industry to keep polluting at historical levels.

“I’ve been incredibly struck at the recent groundswell of interest by countries – including China and Korea – looking to develop carbon markets,” Harinder Sidhu, an Australian civil servant, said Wednesday at a panel discussion here.

“It’s very apparent that the pace is picking up in terms of both interest and action on the part of countries thinking about how to develop carbon markets. This really moves the conversation away from how acting on climate change creates costs to how doing so creates opportunity and economic benefit.”

Carbon trading allows countries to meet emissions reduction mandates under the Kyoto Protocol, which came into force in 2005, offering a certain number of tradable emissions-related “allowances” to polluting companies or governments. Further, as representatives try to negotiate a post-Kyoto agreement, many suggest that such exchanges will likely play a key role.

In part, the idea is controversial because it allows certain countries to maintain high pollution levels while shifting the burden for greater cuts to other countries. Yet proponents point out that revenues from these markets are being ploughed back into research on renewable energy, increased electricity transmission inefficiency and, in some cases, low-income housing.

They also suggest that the cost differentials between markets could motivate business interests to push politicians to institute uniform carbon markets – a key consideration in the new discussion over linking various emissions exchanges.

Sidhu was in Washington to talk about Australia’s carbon market, which began operating last year and is planned to be fully operational within the next three years. In August, Australian officials arrived at an initial agreement to link their market with that of the European Union, which since 2005 has operated the world’s first and largest emissions exchange, the E.U. Emissions Trading System (ETS).

The United States, which is not a party to the Kyoto Protocol, already has a nine-state carbon market operating in the country’s northeast. For the past six years, the Regional Greenhouse Gas Initiative (RGGI) has operated as an emissions exchange aimed at capping greenhouse gases from within the power sector.

Now, the world’s second-largest carbon market is starting to function in the western U.S. state of California, covering around 85 percent of the state’s emissions. By itself California is the world’s ninth-largest economy, and the value of its cap-and-trade programme is forecast to top two billion dollars by the end of this year.

This week, California and the Canadian province of Quebec arrived at an agreement to link their carbon markets. In recent years, California officials have held similar discussions with E.U. and Australian counterparts.

Advocates say such moves are highlighting the increasingly important climate actions being taken by sub-national governments, even as Washington politicians have remained unable to pass comprehensive legislation limiting greenhouse gases.

“While it’s easy to get depressed about the national-level discussion on action on climate change here in the U.S., we’re seeing some incredible progress being made at the state level,” Tom Perriello, president of the Center for American Progress Action Fund, a Washington think tank, told an audience Wednesday.

“In 2009, the U.S. committed to reducing its emissions by 17 percent below 2005 levels, and there had been ample reason to believe that we couldn’t reach that level without national legislation. Now, however, this appears to be within reach, and state action is a cornerstone of that progress thus far.”

Experts here suggest that linking the world’s two largest carbon markets is unlikely in the near future, largely for political reasons. Yet there is also a significant difference of opinion between the U.S and E.U. that may stymie future attempts at interlinking these markets: the use of forest “offset credits”.

Under a mechanism commonly known as REDD – an international tool set up after the signing of the Kyoto Protocol and which stands for “Reducing emissions from deforestation and forest degradation” – entities in developed countries are able to purchase or trade credits to offset their greenhouse gas emissions in return for agreements from developing countries to protect forestlands.

While both the E.U. trading scheme and the Kyoto Protocol have expressed scepticism about the efficacy of forest credits, the U.S.’s RGGI has decided to use this approach. Further, some groups are now reportedly pushing California to incorporate REDD offsets in its new carbon market, while related agreements have already been struck with communities in Mexico and Brazil.

“One of the primary concerns about REDD is that it encloses forests from access to local communities,” Jeff Conant, an international forests campaigner with Friends of the Earth U.S., an advocacy group, told IPS.

“In numerous cases it has been shown to exacerbate social conflict and to increase incentives for the displacement of indigenous communities from the forests they use or live in. A major concern for California is that state authorities here have no way to deal with these types of injustices, and all just to provide cheap offsets for markets.”

Indeed, Conant says the cap-and-trade system in general is flawed, and that California’s system in particular appears to have already been significantly watered down.

“The state gave away 90 percent of its allowances in the first year, and over half of mandated emissions reductions will be produced by offsets, which are notoriously prone to gaming and displace rather than actually reducing emissions,” he notes.

“After you take these factors into account, they could make up more than 100 percent of the reductions in California – meaning that the cap and trade will result in zero emissions reductions in the state. The law is supposed to be creating incentives for innovations, whereas cap and trade merely allows the fossil fuel industry to keep polluting at historical levels.”

Conant says this is a “roundabout” way of putting money into these technologies. More effective, he suggests, would be to impose a carbon fee on polluting industries, and to use that money to directly stimulate clean energy investment.