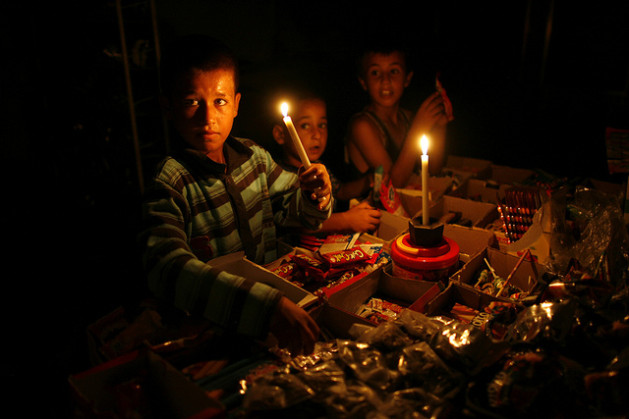 UNITED NATIONS, Apr 2 2013 (IPS) - In most countries, children are treated more gently by law enforcement than adults, with the right to have a parent present during questioning, for example. The situation is different in the Occupied Territories.

“The common experience of many children is being aggressively awakened in the middle of the night by many armed soldiers and being forcibly brought to an interrogation centre, tied and blindfolded, sleep deprived and in a state of extreme fear,” according to a recent UNICEF report on the Israeli detention of Palestinian children.

Israeli law enforcement officials have arrested approximately 700 Palestinian boys every year for the past 10 years, demonstrating patterns of ill-treatment that UNICEF calls “widespread, systematic and institutionalised”.

The majority of these boys are accused of the same crime – throwing stones at Israeli soldiers or their vehicles.

For the past several years, human rights organisations, U.N. experts, and both Palestinian and Israeli lawyers have made numerous attempts to bring attention to this issue as a clear violation of international human rights law.

In March, UNICEF released a report entitled “Children in Israeli Military Detention”, which outlines Israel’s violations from arrest to detention to interrogation to trial.

In 2009, Israel's establishment of the juvenile military court - an institution which exists nowhere else in the world - was a response to widespread international criticism regarding its prosecution of Palestinian children in adult military courts.

In reality, there are still many loopholes that essentially allow children to be tried under adult conditions, as UNICEF's report demonstrates.

A 1999 Supreme Court decision - also binding on military courts - ruled that interrogations must, without exception, be free of torture and cruel, inhuman or degrading treatment.

Though Israel has made some positive developments in its treatment of Palestinians and children in particular, critics say actual implementation and effectiveness remains questionable.

In March 2010, after an NGO - the Public Committee Against Torture in Israel - submitted a petition against the use of hand ties on prisoners to the Supreme Court, Israeli Defense Forces reportedly introduced new procedures that would prevent their causing pain and injury; state lawyers and the military's legal defence confirmed that these actions were being taken and the petition was dismissed.

While previously only youth below age 16 were considered children, Israel's Military Order 1676, issued in September 2011, recognised all youth under 18 as minors; 16 and 17 year-olds are still sentenced as adults.

Another stipulation of Order 1676 requires that police inform arrested children of their right to legal representation and notify parents/guardians of their arrest; it does not, however, specify how long after arrest detainees must have access to a lawyer.

This military order does not apply to army officials, who are mostly the ones arresting Palestinian children.

Military Order 1676 and many other criminal procedure laws have not been translated or made accessible in Arabic.

It makes specific reference to the Convention on the Rights of the Child (CRC), the Convention Against Torture and Other Cruel, Inhuman or Degrading Treatment, the International Covenant on Civil and Political Rights, and the Geneva Convention regarding the Protection of Civilian Persons in Time of War, all of which Israel has ratified.

In an interview with IPS, Permanent Observer of Palestine Ambassador Riyad Mansour praised UNICEF’s work in “defending the rights of children, regardless of where they are”, and said he hopes, in the case of Palestinian children, that as more people become aware of the situation, more powerful voices will demand action from Israel.

International law demands that “all countries who are party to these conventions hold Israel responsible for violating any of the provisions,” said Mansour.

According to the CRC, arrest and detention of children, and their overall exposure to criminal proceedings, should always be the measure of last resort and should be minimised as much as possible.

If arrest is deemed necessary, the child under arrest and their parents or guardians must be informed immediately of the reasons; the child should only be physically restrained if they become a physical threat to themselves or others.

During interrogation, the child has a right to legal representation, the presence of a family member, and the right to refrain from self-incrimination.

Interrogators are forbidden from obtaining statements through any form of physical compulsion or verbal intimidation; illegally obtained statements are invalid in court proceedings.

Finally, children must be brought before a judge within 24 hours.

Israeli military detention of Palestinian children deviates quite radically from this model.

According to the UNICEF report, soldiers often apprehend children from their homes late at night in a violent manner, damaging property, offering no explanation as to what the charges are or where the child is being taken, and making threats of physical violence and further consequences should the family protest.

Children generally find themselves in the interrogation room within a day of arrest.

Of the cases examined by UNICEF, no child was accompanied by the requisite lawyer and family member; most did not see a lawyer until the day of their trial.

As of this month, the law will require that children under 14 be brought before a judge within 24 hours (reduced from four days), but those under 18 can still be held for 48 hours; furthermore, the judge may delay trial for 30 days at a time, up to 188 days.

Almost all children confess to their alleged crimes, which is no surprise considering the interrogation techniques reportedly employed by Israeli officials – harsh restraint, physical abuse, verbal intimidation, solitary confinement, and threats of worse abuse and even death against both the child and their family members.

Overwhelmingly, confessional documents – often in Hebrew – are the primary evidence for convictions.

Children and their lawyers tend not to object to forced confessions for fear of provoking harsher punishments.

On average, sentences range from two weeks to 10 months.

Technically, children aged 14 and older can receive the maximum sentences for crimes – 10 years for throwing an object at a person and 20 for throwing it at moving vehicle.

According to Catherine Weibel, UNICEF’s chief of communication in the occupied Palestinian territories, Israeli officials who worked with UNICEF on the report “generally acknowledged that there were problems, but tended to minimise their scope.”

In a correspondence with IPS, Israeli Ministry of Foreign Affairs Spokesperson Yigal Palmor identified what Israel believes to be major sources of the conflict.

While no internationally recognised state sovereignty exists in the territories, Israel, as an occupying power, can only enforce military law.

“Obviously, military law does not provide the same rights and safeguards as civil law,” said Palmor, “for adults and minors alike.”

UNICEF’s report includes a series of recommendations, which it intends to implement with Israel’s cooperation.

Ambassador Mansour has his doubts.

“We don’t believe that the Israeli occupying authority is putting any serious effort to stop these blatant violations of international human rights law,” he told IPS, however, he believes that reports like UNICEF’s “play a role in maximising pressure on the violators of the law”.