A bill addressing prior consultation with indigenous peoples on legislative measures remains tied up in Ecuador’s National Assembly. 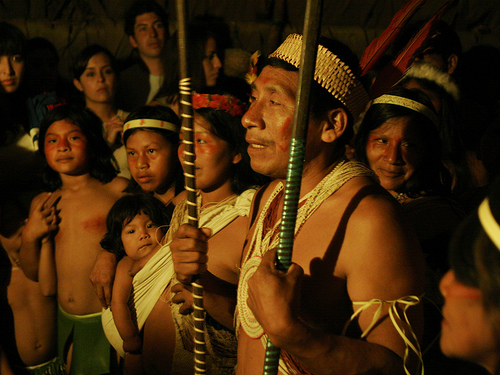 A Huaorani man armed with traditional spears and his wife and children welcome a group of tourists to the community of Tigüino, located within Yasuní National Park. Credit: Eduardo Valenzuela/IPS

QUITO, May 2 2013 (IPS) - The Constitution of Ecuador adopted in 2008 establishes a broad range of rights for indigenous peoples and nationalities, including the right to prior consultation, which gives them the opportunity to influence decisions that affect their lives.

But this right has yet to be fully translated into legislation, as the bill for a Law on Consultation with Indigenous Communities, Peoples and Nationalities is still being studied by the National Assembly.

Article 57, section 7 of the constitution guarantees “free, prior and informed consultation, within a reasonable period of time, on plans and programmes for exploration, exploitation and sale of non-renewable resources located on their lands which could have environmental or cultural impacts on them.”

The constitution also stipulates the right of indigenous peoples “to share in the profits earned from these projects and to receive compensation for social, cultural and environmental damages caused to them. The consultation that must be conducted by the competent authorities shall be mandatory and timely.”

“If the consent of the consulted community is not obtained, steps provided for by the Constitution and the law shall be taken,” it adds.

Legal grounds for consultation are also established in Convention 169 of the International Labour Organization (ILO), which Ecuador ratified in 1998, and the United Nations Declaration on the Rights of Indigenous Peoples, adopted in 2007.

Nevertheless, recent mining and oil drilling projects have put the government’s commitment to respecting the right to consultation to the test, and spurred indigenous organisations to take action.

On Nov. 28, 2012, hundreds of indigenous representatives converged in Quito to protest the lack of consultation prior to the 11th oil auction round, in which exploration blocks containing an estimated total of 1.6 billion barrels of crude oil would be put up for bids from private companies.

At the time, Domingo Peas, a leader of the Achuar indigenous ethnic group, declared that “the government says it has carried out prior consultation, but this is not true.”

“The consultations carried out among the peoples and nationalities in the areas of influence are invalid, because there was no participation by indigenous peoples and nationalities in determining the way they were conducted, they did not respect their traditional methods of decision-making, and cultural aspects, such as language, were not adequately taken into account,” he stressed.

Overall, said Peas, the consultations “were neither prior, nor free, nor informed, and were conducted in bad faith.”

The president of the influential Confederation of Indigenous Nationalities of Ecuador (CONAIE), Humberto Cholango, believes that the authorities have not done enough.

“Prior consultation is still pending, we have still not seen the results we would like to see. We need the law to be approved; that would be a major advance,” he told Tierramérica*.

The draft law, comprising 29 articles, refers to consultation on legislative measures and establishes four stages: preparation; a public call for participation and registration; the actual holding of the consultation; and analysis of the results and conclusion.

In accordance with the law, the government will determine if a proposed bill affects the rights of certain communities, in which case the National Assembly will convene a prior consultation that will be conducted through the National Electoral Council.

Lourdes Tibán, an indigenous National Assembly member from the leftist opposition movement Pachakutik, told Tierramérica that adoption of this law is crucial, because “it will guarantee the participation of indigenous nationalities in decisions on future laws that directly affect them, and will therefore prevent a lack of consensus.”

Once this legislation is in force, other major bills can be addressed, such as the proposed law on water resources, on which debate has been postponed since 2010 precisely due to the resistance posed by indigenous peoples. One of their key concerns is that the proposals made during a prior consultation process will not be included in the final text of the law that was submitted to consultation.

A number of other bills, such as those for laws on culture and land, are also on hold for the same reason.

This is the heart of the conflict.

One year ago, President Rafael Correa stated in one of his regular Saturday broadcasts that non-governmental organisations “want prior consultations to be popular consultations and to be binding; that means that for every step we want to take, we will need to ask the community for permission.”

“This is extremely serious. This is not what the international agreements say. This would not mean acting in the interests of the majorities, but rather in the interest of unanimity. It would be impossible to govern that way,” he declared.

In response to these statements, indigenous organisations sought reinforcement, calling on agencies such as the Inter-American Commission on Human Rights and the ILO to supervise the implementation of prior consultation.

In fact, indigenous communities in Ecuador have already turned to some of these mechanisms in the past. In 2003, the Quechua community of Sarayaku filed a complaint with the Inter-American Commission on Human Rights against the state for authorising oil exploration in their territory, without prior consultation.

The community, located in the province of Pastaza, in Ecuador’s Amazon rainforest region, denounced damages to their territory, culture and economy. In June 2012, the Inter-American Court of Human Rights ruled in favour of the community and against the state.

The government is still studying how to pay the required compensation – a total of 1,398,000 dollars for material and moral damages and legal costs – and how to finish repairing the physical damage caused.