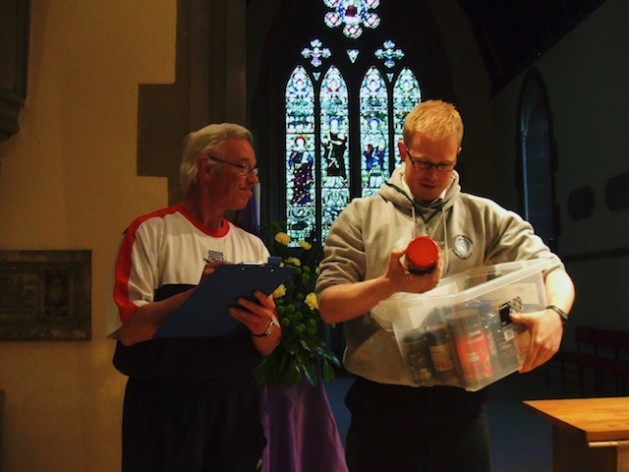 Volunteers at the food bank in Clay Cross in Britain. Credit: Lara Stanley/IPS.

CLAY CROSS, Britain, May 5 2013 (IPS) - The social consequences of austerity economics have been most visible in Europe’s southern periphery. In the UK, the coalition government has brought in sharp cutbacks in welfare state provision in the name of dealing with the financial crisis. Their impact is becoming increasingly visible.

A survey by the Netmums website found that one in five mothers in the UK regularly goes without meals to feed their children. Thousands now rely on charities and emergency food banks to feed themselves and their families.

In the last 12 months the Trussell Trust, the largest operator of food banks in the UK, says it has fed 350,000 people – 100,000 more than anticipated and an increase of 170 percent over the previous year.

People go to food banks for many different reasons. Some are underemployed, others are victims of domestic violence. Some have fallen victim to loan sharks who prey on the poor by offering them loans at exorbitant rates of interest. But most are unemployed, and have had their benefits removed or cut as a result of the government’s ideologically-driven onslaught on people it regards as work-shy ‘scroungers.’

All these factors have fuelled what the Trussell Trust calls an “epidemic” of hunger that is becoming increasingly visible in small and large towns across the UK.

Clay Cross is a small town of 5,000 in the hilly countryside of north Derbyshire that used to be a centre of the British coalmining industry. Like many former mining towns and villages in the area, Clay Cross has fallen on hard times since the closure of its local pit back in the 1980s, but things have recently begun to  get a lot harder.

One evening I visited the local Trussell Trust food bank in Saint Bartholomew’s Church on the high street. Inside, volunteers were setting out some of the two tons of food donated by shoppers during a two-day collection across various Tesco supermarkets the previous weekend. The food bank only opened last August, but since then it has fed 1,147 people, and is opening up other food banks in the surrounding area.

One of its clients was David, who now works as a volunteer for the Trust. A former taxi driver, David worked as a fulltime carer for his disabled wife for 12 years. But when she died last year, he lost his carer’s salary and had no income for seven weeks while he waited for unemployment benefit. During that time, he says, he lived on three carrier bags of food that he was given by the food bank.

Delays in benefits payments and benefits sanctions are the most common reason for people coming to the food bank, and many of those who do, find the experience deeply shameful and humiliating. “Some people wander in and crack on,” says project coordinator James Herbert. “Other people stick their heads in, see there are a lot of people, and go away, and we never see them again.”

Herbert and his team are keen to overcome these reservations and to welcome people who turn up at these drop-ins, but he is also indignant that such services are required: “It’s reprehensible. Ultimately people should be ashamed of themselves. Local and national government should be ashamed of themselves, to leave people in a situation where they have to rely on charity to feed their families.”

Most service users come to the Trust through referrals from charities or government agencies, with vouchers that enable them to be collect food three or four times only.   Bernard (not his real name) has just come to the centre on referral from his local job centre for the first time. A 38-year-old volunteer mentor working with young offenders, Bernard was on unemployment benefit until two weeks ago, when his benefit was cut because he didn’t apply for one of the jobs offered by his local job centre.

Bernard insists that he never received the offer, and has appealed against the decision, which may result in a 29 pounds a week hardship fund, or the full restoration of his 71 pounds benefits. If not, he will get nothing for another six weeks, even though he lives in a flat without gas, electricity, or food.

I asked him what he thought of government ‘scrounger’ rhetoric. “If I’m a scrounger then I’m a scrounger, but at the end of the day, what else am I going to do? Am I going to go and rob to survive? In the 21st century, in one of the most advanced nations in the world, and people have got to come to food banks, something is not quite right is it?”

Colin Hampton, coordinator of the Derbyshire Unemployed Workers Centre, agrees.  “The situation is worse now than it ever was in the 1980s. People are coming to us asking for food in desperate situations, and we refer them to food banks. But while we appreciate that people are trying to help, our biggest worry is that unless we express our outrage, this will become the norm, and people need to ask why this is happening.”

British Prime Minister David Cameron has praised the Trussell Trust’s work, but  food banks are a direct consequence of government policies that are designed to force people off benefits, regardless of consequences. Labour MP Peter Hain recently accused the government of “terrorising” the unemployed in his constituency by forcing them to choose between starvation and low-paid work.

The 19th century Poor Law system once had a similarly punitive and deterrent attitude towards the industrial poor. Today, hunger is a consequence of manufactured poverty in the seventh largest economy in the world, and the poor are once again being victimised and punished.

In these circumstances, food banks may become a convenient substitute for statutory assistance, enabling the political heirs of the late Margaret Thatcher to strip still further at the welfare safety net, in the knowledge that people may be hungry, but at least they won’t be starving.