Insects, from Delicacy to Tool against Hunger 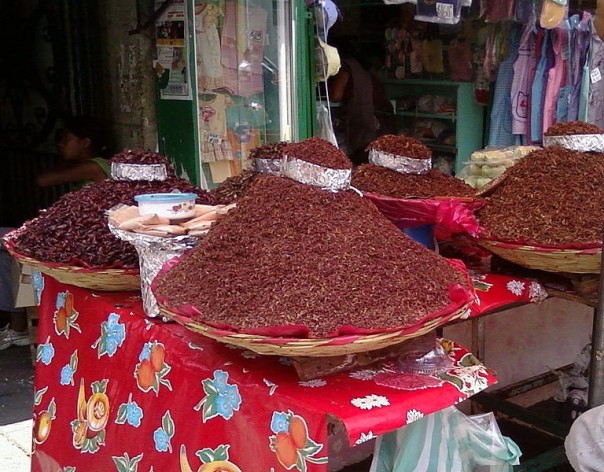 Toasted grasshoppers on sale in the Benito Juárez market in the capital of Oaxaca state, Mexico. Credit: Nsaum75 CC BY-SA 3.0

MEXICO CITY, May 22 2013 (IPS) - The Food and Agriculture Organisation’s recommendation to consider using edible insects as a food source to combat hunger may have particular repercussions in Colombia and Mexico, two Latin American countries that have a tradition of eating insects and a high degree of biodiversity.

Mexico has 300 edible insect species, according to a study published in May by the entomology department of Wageningen University in the Netherlands and the Food and Agriculture Organisation of the United Nations (FAO), titled “Edible insects: Future prospects for food and feed security”.

But local researchers have identified more than 500 species in the centre, south and southeast of Mexico, a mega-biodiverse country with a poverty rate of 47 percent.

“Insects are a viable, cheap source of high quality food that could be even better than the packaged foods that are consumed at present,” researcher Julieta Ramos-Elorduy, at the National Autonomous University of Mexico’s Biology Institute, told IPS.

In her view, “This country is ready for mass consumption of insects, but people need education about techniques and ways of marketing them. Protecting them is not a concern. There are no official measures,” said the expert, who has been carrying out research since the 1970s on the benefits of insects, and has reported 549 edible species.

The issue acquires an environmental dimension, particularly on International Day for Biological Diversity, celebrated this Wednesday May 22.

Eating insects or entomophagy is an indigenous tradition in Mexico, attested to by the Florentine Codex, written by Franciscan friar Bernardino de Sahagún (1499-1590) who described the consumption of 96 species.

Some insects provide up to three times more protein, weight for weight, than beef, and their nutrient concentrations are surpassed only by fish, according to the National Commission for Knowledge and Use of Biodiversity (CONABIO).

The Mexican insect menu is made up of blood-sucking bugs, worms, beetles, butterflies, ant and fly larvae, bees, wasps and “chapulin” grasshoppers. They can be grilled, fried or served with different kinds of sauces.

In recent decades, several of these delicacies have vaulted from kitchens in poor rural homes to tables in fancy restaurants.

In Mitla, a town close to a Zapotec archaeological site of the same name in the southern state of Oaxaca, a small business uses moth larvae (Hypopta agavis) that feed on American aloe leaves to make a hot spicy salt to accompany mescal, an alcoholic drink distilled from the same aloe plant.

“We follow a homemade recipe. Grinding is done by hand and we use a hand mixer. We also package by hand,” Diana Corona, the commercial manager of the firm Gran Mitla which produces 300 kilograms of “sal de gusano” (larva salt) a month, told IPS.

The larvae or worms are collected from August to October and frozen to ensure continuous production, as from November to the following May harvesting is banned throughout the country.

The FAO publication says that more than 1,900 species are part of the traditional diets of at least two billion people worldwide. The favourites are beetles, caterpillars, bees, wasps, ants, grasshoppers, locusts and crickets.

Collecting and farming insects could create jobs and income, and could have industrial-scale potential, the authors say.

“That could be achieved if the insects are farmed and marketed in large quantities. But producers need to be aware that their resources are being depleted,” said Ramos-Elorduy, who is investigating the productivity of insect species that feed on maize and pumpkin, and seeking ways of increasing it.

“Collecting techniques are the same everywhere, but there is no legislation stipulating proper techniques. People do not know what they are. Besides, wages are very low,” she said.

In their research paper “Edible insects in some locations in Central Region of Mexico State: Collection techniques, sale and preparation”, Ramos-Elorduy, Andrés Juárez and José Manuel Pino warn that “this valuable food resource is in danger of disappearing, due to a variety of environmental and socio-economic problems.”

The paper, published in December, concludes that “impacts on the environment, cultural change and changes in land use are causing the consumption of insects to decrease, especially among young people.”

Corona, of Gran Mitla, agreed that measures should be taken to protect these species. “Regulations are needed for collection and marketing. Insects are part of the Mexican diet and the resource must be protected,” she said.

For the same reason, many collectors are reluctant to talk about where they find their insects and grubs, and how they capture or harvest them.

The FAO report recommends automated infrastructure and regulatory frameworks to ensure stable, reliable and safe production. It also stresses that insect biomass could be used as the raw material for animal feed.

In Colombia, a snack available from street stalls is the crunchy “hormiga culona” (Atta laevigata), a leafcutter ant species, sold toasted and salted. The origin of this and other dishes is native culture.

But “going into the rainforest for large-scale extraction of insects is a touchy issue, because they are found in wildlife habitats,” Colombian biologist and regional planner Jaime Bernal Hadad told IPS.

Colombia has a poverty rate of 33 percent, and it is the second most mega-biodiverse country on the planet, after Brazil.

“In tropical ecosystems, although there is a great diversity of species, there are only relatively few individuals per species,” said Bernal Hadad. “Large-scale extraction could lead to the extinction of species, or create environmental imbalances.

“Beetles on fallen trees in the forest help decomposition and the balance of those forests,” he said. “Wasps and bees have an important role in pollination. And while there are native groups who eat beetles and prize them highly, they are minority groups and do not create problems.”

In Bernal Hadad’s view, farming insects “is an interesting option. But other factors come into play, such as the issue of cultural acceptability and consumption.

“Of course, in Europe it may be regarded as exotic, but if we consider marginalised populations in Latin America, the issue is very different,” he said.

The fight against hunger “cannot ignore structural issues,” he said. Moreover, “it is worth asking whether the proposal could be controlled or if it would become another method of interfering with conservation, not as a result of ranching and the timber industry, but because of insects,” he said. “Then we would continue to reproduce the destruction of natural systems, without real solutions.”

With additional reporting from Helda Martínez in Bogotá.