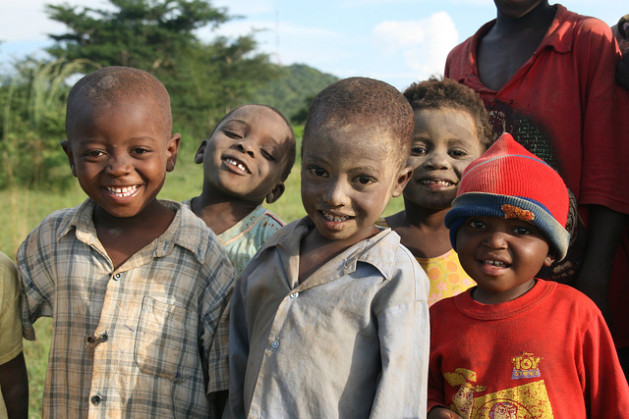 The right to a legal identity is fundamental to meeting all other rights and protect a child from other forms of abuse and exploitation. Pictured here children in Kafue, Zambia. Credit: Brian Moonga/IPS

ADDIS ABABA , May 24 2013 (IPS) - There is much to celebrate this week as the African Union marks 50 years as an independent pan-African entity.

In the last half century, Africa has witnessed an era of self-determination and independence. As the continent looks to the next 50 years, the focus must be on how to build an inclusive future based on the aspirations and rights of the continent’s more than one billion citizens.

This will rely on every country in the AU being equipped to lay the best foundation for their youngest citizens, their children.

Yet, as the talk of Africa’s new economic potential increases and more countries move into the middle income ranks, the reality is that this young continent, with half of its population under the age of 18, still has much to do if this youth dividend is to lead to a stable, democratic and fairer place where its young people can reach adulthood.

Despite these noble commitments, there is a silent scandal that needs to be urgently addressed: the scandal of invisibility. Across the continent, millions are born and millions die with their lives unrecorded.  For example, only 44 percent of children under five years of age have their births registered.  The majority of these live in rural or remote areas and many are poor and on the periphery of Africa’s new wealth and prosperity.

One only needs to look at other successful developed regions to realise that effective, efficient and modern systems of civil registration and vital statistics form the basis of good governance, economic integration and offer the security of identity that all people require.

Conducting a census every few years is a key. But strong vital statistics based on real-time information provide leaders and decision-makers with the knowledge required to plan and deliver basic services.

The right to a legal identity, enshrined in the African Charter of the Rights and Welfare of the Child and the United Nations Convention on the Rights of the Child, is fundamental to meeting all other rights and protect a child from other forms of abuse and exploitation.

In some countries, proof of birth through a birth certificate can determine whether a child has access to primary school – or not. In others, its absence can mean a girl may be forced into early marriage because even with a law in place, she has no document to prove that she is still too young.  In yet other countries, it means that boys and girls can be forced into armed factions or exploited as cheap labour – because people with the interests of children at heart cannot make a case for exempting those too young to serve.

So if arguments for building strong civil registration and vital statistics are well accepted, why are we still not yet seeing them translated into results on the ground?

Momentum is building. African leaders agreed in 2012 to make this a priority and regular ministerial meetings are held every two years to share expertise and help strengthen civil registration systems.

Under the auspices of the Africa Programme on Accelerated Improvement on Civil Registration and Vital Statistics, African governments are now working alongside the U.N. Economic Commission for Africa, the African Development Bank and other U.N. agencies to provide the technical support needed to help build effective systems.

We have seen the introduction in some countries of technology and innovations to help leap frog progress. The U.N. Children’s Fund, with support from the European Union, is identifying ways to use new technology to increase birth registration and expand services to remote areas.

Coordination between ministries and between local, state and national governments is improving and initiatives such as setting up registration sites in hospitals and health clinics are also helping to increase the numbers of newborns being reached.

But even with this success, progress is still too slow, with too many people not registered and technological and digital advances not being introduced in areas where they could make a dramatic difference.

In remote and rural regions, civil registers often struggle, due to inadequate transport or a lack of incentives, to reach their constituents and instead wait for people to come to them. Often parents do not understand the importance of their child being registered or the contribution it could make to a country’s national development. Often budgets are inadequate to roll out services to everyone.

As African Heads of State meet to celebrate the achievements of independence and forge plans for the next 50 years, it is now time for them to be practical. Investing in civil and vital registration systems to make sure that all of the continent’s citizens, especially the very youngest, are counted right from the start is a critical first step.

*Martin Mogwanja became U.N. Children’s Fund (UNICEF) deputy executive director in 2011. He has worked all over the world for UNICEF including serving as Representative in Pakistan, Uganda, Democratic Republic of the Congo and also as deputy regional director for West and Central Africa in Abidjan, Côte d’Ivoire.

**Carlos Lopes of Guinea-Bissau is the executive secretary of the U.N. Economic Commission for Africa. He has more than 24 years experience at the U.N. as U.N. Development Programme resident coordinator and resident representative in Brazil and Zimbabwe. A member of several African academic networks, as well as a strategist and socio-economist, Lopes has vast experience in capacity-building and technical cooperation on the continent.