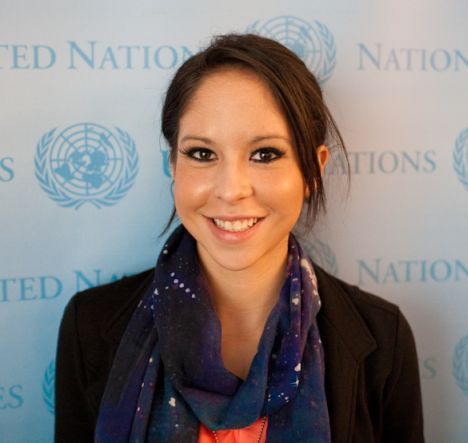 UNITED NATIONS, May 24 2013 (IPS) - Aboriginal youth are making their mark at the two-week United Nations Permanent Forum on Indigenous Issues. And this year, the gathering’s twelfth, 24-year-old Angela Landry, whose Anishinaabe name is Eagle Heart Woman, is representing them.

The world is getting younger. With global population surpassing seven billion last year, more 50 percent of the people around the world are under age 30 – 3.5 billion people, according to a 2012 report by Euromonitor International. The majority of them are in developing countries.

Throughout Landry’s life, she has existed in multiple spaces at once. The youth rep is half French-Canadian and has lived in both cities and in her native community, Pays Plat First Nation, two and a half hours east of Thunder Bay, where she currently resides. Pursuing a master’s degree in communications and social justice at the University of Windsor, she defends her thesis in August.

IPS correspondent Lucy Westcott spoke to Landry, who was in Thunder Bay, Ontario on a flight layover, about the challenges facing aboriginal youth around the world, and new ways that young people can reconnect with their cultures via technology.

Q: How did you become involved in advocacy for Indigenous peoples?

A: My father was in the military, so I grew up all over the place. I went to high school in Thunder Bay, but there weren’t many aboriginal students. Every couple of weeks my mother would take me and my sisters (Landry, a twin sister and an older sister) back to our community.

My mother would also take us to Friendship Centres to help us reconnect with our history, our culture, and constantly remind us of who we are. Three years ago I started my advocacy work with the National Association of Friendship Centres (there are 119 across Canada) and became a youth executive there.

I serve on the board and have meetings with the Canadian government about issues related to the country’s Indigenous youth. I’m making sure our stories are being told first-hand, instead of by the government.

Q: Do you think Indigenous youth who move away to cities feel disconnected from their culture and find it difficult to reconnect?

I think it depends on the family, as a lot of Indigenous children are placed into foster care. (A recent news article reports that aboriginal children under the age of 14 make up over 50 percent of children in care in Canada).

Even when children are placed into care, it’s inevitable that they feel the pull of their aboriginal culture and history. It’s inside you: I feel indigenous no matter where I am and where I’m going. Friendship Centres across Canada also offer opportunities to reconnect with your communities through speaking with elders and learning the language.

In Canada, we have Aboriginal People Television Network (APTN) which provides media and programming for Indigenous peoples, by Indigenous peoples. We also have many Indigenous media outlets but they are underground and not well known. In mainstream media there is a high lack of representation when it comes to healthy outlooks of Indigenous peoples in Canada.

Q: Is the Internet being used as a valuable source for Indigenous youth to reconnect with their culture?

A: A lot of Anishinaabe youth are learning the language through an iPhone app. (Neechee is an Anishinaabemowin language app, with scrollable lists of pronouns and verbs to help speakers string together sentences.)

Some young people in the community will say, ‘I’m learning the language through an app,’ and the elders will say, ‘You should have come and talked to me.’ Social media and the Internet are good, but not at the expense of learning in the traditional way, from our elders, and having the language and knowledge passed down orally. Now, learning from an elder doesn’t seem as important as it should.

Q: Are there many opportunities in Canada for Indigenous youth to learn about their history and culture in schools?

A: The educational system in Canada doesn’t provide an adequate history or opportunity to learn about the country’s Indigenous cultures, or to talk about the different nations. During my Masters I didn’t review a single article dedicated towards Indigenous peoples or by Indigenous academics. I told my professors that it was important to include Indigenous culture in the dialogue and in the class.

Q: What challenges or problems do indigenous youth face across the world?

A: Indigenous youth globally suffer from low socio-economic status, high unemployment rates, low education, and isolation. Many communities, especially in the Pacific Northwest, you can only fly to, and they’re two and a half hours away from any other place.

But whenever we talk about Indigenous youth, or Indigenous people, it’s always about what bad things are happening, the negatives. When I go back to my community, you see the love, you see the friendship, and you see the connection. We also have different perceptions when it comes to the idea of success. The Western idea of success, which is material and financial, is different than mine. We’re successful in our culture, our community.

Q: What does the future hold for indigenous youth?

A: Now youth are being taken seriously, allowing us to say our statements loud and proud. We’re being recognised in Western systems like the United Nations, and we as youth are being prioritised.

After my masters, I want to continue advocating for Indigenous youth and peoples. It is truly my passion. I hope this generation will keep pushing for a brighter future.