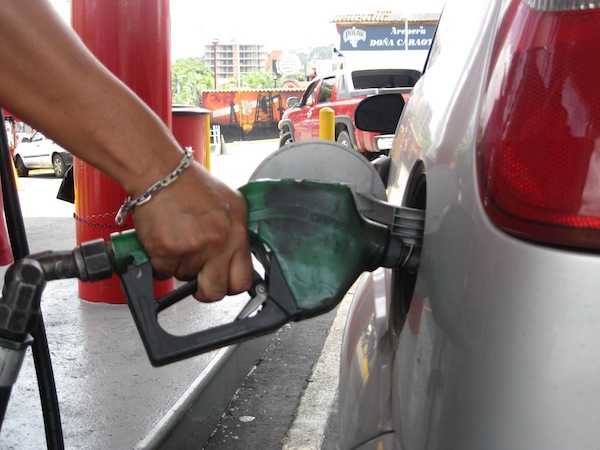 The least expensive petrol in the world is in Venezuela. Credit: Fidel Márquez/IPS

WASHINGTON, Jun 17 2013 (IPS) - A shift in U.S. foreign policy towards Venezuela may be pending as a bilateral rapprochement suddenly appears more possible than it has in years.

On the sidelines of talks held earlier this month in Guatemala by the Organisation of American States (OAS), U.S. Secretary of State John Kerry met with Venezuelan Foreign Minister Elias Jaua, with Kerry’s subsequent statements indicating that relations could be heading in a friendlier direction.

“We agreed today – both of us, Venezuela and the United States – that we would like to see our countries find a new way forward, establish a more constructive and positive relationship and find the ways to do that,” Kerry said following the meeting with Jaua, which was reportedly requested by the Venezuelans.

The meeting happened on the heels of the release of Timothy Tracy, a U.S. filmmaker whom Venezuela had been holding on accusations of espionage. His release was interpreted by many as an “olive branch” being offered by the new Venezuelan government of Nicholas Maduro, whose presidency Washington still has not formally recognised.

Only months ago, before the death of Venezuela’s long-time socialist leader Hugo Chavez, any normalisation of relations between Venezuela and the United States seemed highly unlikely.

In 2002, Chavez was briefly removed from power by a military coup d’état that the U.S. Central Intelligence Agency (CIA) had known was imminent. Chavez immediately accused the United States of having played a part in the event. After his suspicions were confirmed partly valid, his rhetoric grew more scathing.

In 2006, he famously told the United Nations General Assembly that then-U.S. President George W. Bush was “the devil himself”.

Following Chavez’s death from cancer in March, however, his hand-picked successor, Maduro, the former vice-president, has not been as vitriolic in his posturing vis-à-vis the United States.

According to Michael Shifter, president of the Inter-American Dialogue, a Washington-based think tank, Maduro has offered “conflicting signals”.

“Maduro has so far shifted in his position toward the U.S. between a moderate approach and a more hard-line one,” Shifter told IPS.

The new president’s waffling may be a reflection of his tenuous grip on power. By many accounts, Maduro lacks the political prowess and rabble-rousing charm of Chavez, who enjoyed military backing as well as fervent support from the lower classes.

In addition to a strong anti-Chavista opposition that openly challenges the legitimacy of his narrowly won election, Maduro has had to deal with a split within Chavez’s own former political base.

Shifter pointed out that among the military, which was once a source of significant strength for Chavez, more support is given to Diosdado Cabello, currently head of Venezuela’s parliament and whose supporters believe he was the rightful heir to the presidency.

Maduro’s legitimacy stems largely from his perceived ideological fidelity, the reason for his selection by Chavez to lead in the first place. Shifter said this leads him to “emulate” his predecessor and makes rapprochement with the United States less probable.

Still, ideological concerns may not ultimately decide the issue. Venezuela has inherited from Chavez an economy in difficult straits, which continues to suffer from notorious shortages and high inflation.

Over half of Venezuela’s federal budget revenues come from its oil industry, which also accounts for 95 percent of the country’s exports. Estimated at 77 billion barrels, its proven reserves of black gold are the largest of any nation in the world.

Despite a troubled political relationship, its principal customer is the United States, which imports nearly a million barrels a day from Venezuela.

Venezuela’s oil industry has been officially nationalised since the 1970s, and, as president, Chavez further tightened government control over its production. His government took a greater chunk of revenues and imposed quotas that ensured a certain percentage would always go directly towards aiding Venezuelans via social spending and fuel subsidies.

While these measures may be popular with Venezuelans, who pay the lowest price for gasoline in the world, critics argue such policies hampered growth and led to mismanagement of Petroleos de Venezuela, S.A. (PdVSA), the main state-run oil company.

In order to boost production, PdVSA agreed in May to accept a number of major loans. This includes one from Chevron, one of the largest U.S. oil companies, which will work with Venezuelans to develop new extraction sites.

“The oil sector is in deep trouble in Venezuela – production is down and the economic situation is deteriorating,” explained Shifter. “They know they need foreign investment to increase production, and this is in part what has motivated Maduro to reach out.”

If its economy continues to falter, Venezuela may be further tempted to embrace the United States, which has the largest, most sophisticated fossil fuel industry in the world. Kerry’s recent words suggest that the administration of President Barack Obama would be waiting with open arms.

“Venezuela cannot confront its economic crisis and the United States at the same time,” Diana Villiers Negroponte, a senior fellow at the Brookings Institute, a Washington think tank, told IPS, “and we are a pragmatic country which will deal with Maduro if it is in our interests.”

Indeed, Negroponte said she was “optimistic” about the possibility of rapprochement between the two countries within the next six months. She notes a “troika” of issues on which the United States is looking for Venezuelan cooperation: counter-terrorism, counter-narcotics and assistance in ridding Colombia of its FARC rebels.

Nonetheless, major actions remain to be taken if normalisation is to even begin, such as the exchange of ambassadors and official U.S. recognition of the Maduro government. Shifter (who regards the Kerry-Jaua meeting as “a small step”) was not optimistic that these larger requirements will be completed in the short term.

“I don’t think Washington is going to push hard to send an ambassador to Caracas,” he said. “It will probably take more time to observe the new government and see where it is going.”