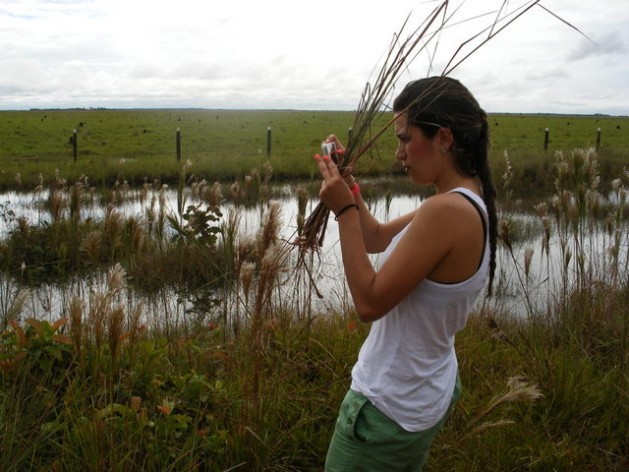 Biologist Juliana Cárdenas gathers samples of the invasive species West Indian foxtail along the road between the towns of Orocué and Yopal, in the Colombian department of Casanare,.during the Travesía Humboldt. Credit: Constanza Vieira/IPS

OROCUÉ, Colombia , Jun 21 2013 (IPS) - Along the unpaved road between the town of Orocué and the Wisirare private reserve in the eastern Colombian department of Casanare, biologist Juliana Cárdenas asks the driver to stop the bus so she can collect a specimen of West Indian foxtail, a kind of grass growing along the road.

“I would like to confirm that this Poaceae (grass family) is an introduced species. And if it is, it might be an invasive species, because we’ve seen it all along the road,” she told IPS. “But if it is a native species, then it is simply the most abundant species in this savannah plant community.”

In 2012, IPS saw similar plants in a nature reserve in the Venezuelan state of Táchira. “In that case, this would be a widely distributed species, shared by the two (neighbouring) countries. Or it’s an invasive species that is also found in Venezuela,” Cárdenas responds.

The young biologist is a researcher on invasive species in the Alexander von Humboldt Biological Resources Research Institute, a private-public institution dedicated to biodiversity that forms part of the National Environmental System, linked to the Ministry of the Environment and Sustainable Development.

The conversation occurred during the first stage of the Travesía Humboldt along the Meta river, which took place Jun. 14-20.

The trip covered parts of the departments (provinces) of Meta and Casanare – where Orocué is located – and was the first of a number of journeys planned for this year and next as “a formal part of the process of land-use regulation in the Orinoco river basin,” Humboldt Institute director Brigitte Baptiste said when welcoming the participants on the Travesía or journey, including IPS.

The Orinoquia region gives its name to the valley of the Orinoco river, the world’s third largest in terms of water volume, after the Amazon and Congo rivers. The Orinoco is 2,140 km long and the basin covers 991,587 sq km, 35 percent of which is in Colombia and the rest in Venezuela.

The Meta river, 804 km long with a 93,800-sq-km basin, is the largest Colombian tributary of the Orinoco, which is born in the southern Venezuelan state of Amazonas and forms a natural border with Colombia before running across Venezuela horizontally until flowing into the Atlantic ocean.

The first stage of the Travesía set out from the bustling, chaotic oil port city of Puerto Gaitán in the department of Meta, on the Manacacías river, eight km from the point where it runs into the Meta river and 105 km by boat upstream from Orocué.

The Travesía’s chief objective is to document the current state of Colombia’s Orinoquia region, which is what Cárdenas is helping to do. “A biological invasion is not always obvious. It is not always seen as such,” she said.

“As a precaution,” she said, “specimens are collected of many introduced species of plants that are already classified as highly invasive species by other countries.” The largest number of specimens comes from plants from the grass family.

Cárdenas took photos of the collected specimens while her colleague Lina Vásquez marked the exact location by GPS.

They later placed the specimens in newspaper with alcohol to preserve them. After they return to Bogotá, the specimens will be dried in a special oven, then classified.

“We usually don’t find flowering specimens, and that makes taxonomic classification more difficult,” Cárdenas said. “That is why we generally consult a specialist in this family, because the Poaceae are a large group.”

The first thing the scientists do is check a list of native species, to rule out that possibility, she explained.

“Invasive species normally appear in areas that have been modified or degraded, such as roadsides or ploughed fields. Vehicles and people are carriers of invasive species. You often carry seeds on your pants, for example,” Cárdenas said.

An invasive species is an organism – plant, animal, fungus or bacterium – that is not native and has negative effects on the economy or environment. Invasive species of plants and animals are the second greatest threat to biodiversity after habitat loss.

In Colombia, the third biggest threat is overexploitation of biological resources; the fourth is pollution; and the fifth is climate change, according to the Environment Ministry.

Indirect causes are the expansion of the agricultural frontier, lack of awareness of the strategic potential of biodiversity, and illicit drug crops, the ministry says.

“This has a social and cultural impact, because the species that people originally depended on for a living change,” she said.

In the biodiverse, multicultural Orinoquia region, which has a decades-old tradition of cattle ranching that is gradually being displaced by monoculture agribusiness and oil drilling, the main biological invasion occurred as a result of introduced grass species, which shoved out native species.

But it was followed by other invasions, such as the introduction of African oil palm, which is already classified in other countries as an invasive species.

Colombia is the largest producer of palm oil in Latin America and the fifth largest in the world. And the Orinoquia region accounts for 30 percent of national production.

In 2012, the Environment Ministry’s National Plan for the Prevention, Control and Management of Introduced, Transplanted and Invasive Species documented 298 introduced and transplanted species of fauna and flora and 43 species of flora with a high risk of invasion.

But the list is far from complete, said Orlando Vargas, director of the Ecological Restoration Group in the National University of Colombia’s Biology Department, because with the exception of Amazonia, “there has been no research carried out by region.”

He also told IPS that in Colombia there is a tendency to always start over “from scratch.”

The expert said West Indian foxtail (Andropogon bicornis) “is the worst invasive species in the entire Orinoquia region. It is a species of grass that withstands grazing, slash-and-burn, flooding or drought.

“Although the species is native to the Americas, it has spread all over, and is invading many areas that do not flood, and pastures, throughout nearly the entire country. But these are things that have not yet been documented,” he lamented.