ANKARA, Jun 8 2013 (IPS) - As protests in Turkey stretch into their second week, the precise terms and conditions that could bring the social unrest to an end are unclear, though many speculate about what would end the deadlock between the government and protesters.

In an exclusive interview with IPS correspondent Jacques N. Couvas, Faruk Logoglu, deputy chairman of the major opposition Republican People’s Party (CHP), discussed the current crisis in Turkey and the conditions he believed the government would have to fulfill to end the crisis. 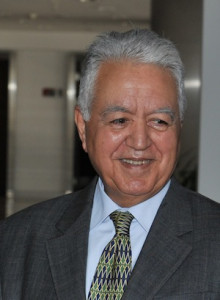 In the 2011 general elections, CHP received 26 percent of the vote. It is the second largest party in the Turkish parliament, with 134 of 550 seats. Logoglu is vice chairman of the Foreign Relations Committee of the Turkish Grand National Assembly (TBMM) and a former ambassador to the United States.

Q:  How do you regard Prime Minister Recep Tayyip Erdogan’s accusations that the opposition has been fomenting unrest?

A: This is a ridiculous claim. Demonstrators gathered of their own will and initiative. Neither the CHP nor any other political party has participated in any official capacity.

The protests were a spontaneous manifestation of discontent with the government’s domestic and foreign policies. The population staged a civic uprising to say that enough is enough.

Q: In Tunis on Thursday, the prime minister said that he would proceed with the Ottoman Artillery Barracks project. How do you see this statement as affecting the demonstrators and the crisis in general?

A: Gezi Park is a symbol of a new political dynamic in our country that says, “Either you change and respect democracy and human rights, or we will continue.” The  [ruling] Justice and Development Party AKP had better understand what is happening in Turkey before it is too late. If they take the wrong steps, everyone will pay a high price.

Things were not going so well – before and after these demonstrations – in foreign policy, society, economy and other areas. If the government uses repressive totalitarian methods, my prognosis is that unrest will continue.

Our party has no control over the demonstrators. There are certainly members of our movement who demonstrate in their capacity as private citizens, but not to our knowledge nor under the CHP banner. The same applies to other parties.

Many protesters have no party affiliation but are associated with organisations with professional and intellectual affinities, such as unions, trade associations or universities.

Q: Foreign commentators have likened the Taksim and Gezi Park demonstrations to the Arab Spring’s beginnings. How do you regard this comparison?

A: What is going on these days in Istanbul and the rest of Turkey is not the Arab Spring, the Arab Revolution or the Orange Revolution.

The main difference is that we already had democracy. CHP has underlined the existence of Turkish democracy as a system for months. We already said, before the events, that democracy could not be taken away from us.

Q: What tangible remedies does CHP propose to resolve the present conflict?

A: The demonstrations started peacefully and must end peacefully. Those responsible for turning a sit-in into a social conflict should make the first move of appeasement.

When a British solder was murdered in London, the British prime minister, David Cameron, cut short his official visit to France. He did this for a single individual. Yet when Turkey is ablaze, the prime minister went to visit Morocco, Algeria and Tunisia. It doesn’t make sense.

The first order of business is for the Turkish prime minister to go on TV and apologise to the Turkish people for the brutal use of force by the police, for his insistence on razing a park in Istanbul to build a shopping centre, and to admit that he was wrong.

He should repent and ask for forgiveness by the people, but that may not be enough to restore peace. He will have to change his policies, which violate human rights in terms of freedom of speech, of media, of communication, of assembly, of demonstration, of individual privacy of life. These are part of the reality of what Turkish people want to live.

We expect that the European Parliament will give clear support to our citizens in this matter.

Q: Supporters of the demonstrators have commented that Turkey’s foreign policy and threats to Syria may have added to the discontent of the middle classes. What is CHP’s policy on foreign relations?

A: From the very start of the Syrian crisis we have taken a position of non-interference in the internal affairs of Syria. Such position aimed at encouraging both the Damascus regime and the Syrian opposition to negotiate in order to chart a peace agreement without foreign intervention.

One and a half years ago, we proposed an international conference, initiated by Turkey, to include the permanent members of the United Nations (U.N.) Security Council, the European Union, the representative of the U.N. secretary-general, the Arab neighbours of Syria, Turkey, and, of course, Iran, the Syrian opposition and the Syrian government. We proposed this not just once, but three times, in writing to the prime minister of Turkey.

Now, U.S. Secretary of State John Kerry and Russian foreign minister Sergei Lavrov have agreed on a similar plan. We do support this initiative, but had our party been heard a year and a half ago, better results would have been achieved.

At CHP, we value Syrian people as neighbours. We regard them as relatives.  We don’t want foreign intervention and certainly not military intervention in Syria. We believe the best way out of that crisis is through a political process.