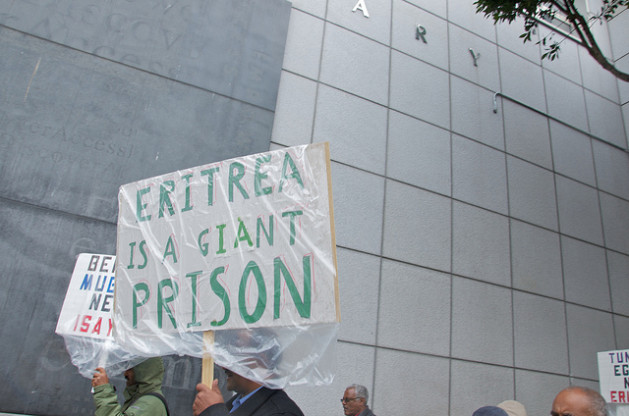 Free Eritrea democracy march in San Francisco. The country is plagued by human rights abuses, and “torture, arbitrary detention, and severe restrictions on freedom of expression” and has been called a giant prison by activists. Credit: Steve Rhodes/CC By 2.0

BANJUL , Jun 22 2013 (IPS) - In February 2013, 20-year-old Mohamed*, like hundreds of thousands of other Eritreans, fled the brutal dictatorship in that East African nation in search of a better life in neighbouring Sudan.

But for Mohamed and others like him, escaping into neighbouring countries has brought no end to their suffering. Many of them have become the victims of human traffickers and Mohamed’s family believes that this was his fate too.

According to Human Rights Watch’s (HRW) “World Report 2013”, Eritrea is plagued by human rights abuses, and “torture, arbitrary detention, and severe restrictions on freedom of expression, association, and religious freedom remain routine.” In addition, military conscription is compulsory and can last for an indefinite period of time.

“For the last 21 years, Eritrea has been ruled by President Isaias Afwerki, who turned the country into a giant prison, and isolated it regionally and internationally.” -- Human rights activist and founder of Human Rights Concern Eritrea, Elsa Chyrum

The international NGO Freedom House, which conducts research and advocacy on democracy, political freedom, and human rights, stated in its “Freedom in the World 2012” report that Eritrea is one of the nine most repressive societies in the world. The United Nations Refugee Agency (UNHCR) reported in 2011 that 220,000 of the country’s 5.4 million people have fled the persecution there.

Mohamed managed to cross the border safely. Once in Sudan, he phoned his mother and told her he had made it. A few days later, he phoned her again to say he had been kidnapped. His cousin, Eden*, believes that he was abducted by criminals who work in conjunction with Sudanese security officials.

“His mother was devastated,” Eden told IPS from Banjul, the capital city of The Gambia, during a recent visit to the West African nation.

“My cousin’s kidnappers were asking for a ransom of 30,000 dollars. His mother is poor, so she started asking people for donations,” she said.

Eden said the last time her family heard from Mohamed, he said he had been sold to the Bedouin people of Egypt.

“One day, my cousin phoned again and said: ‘Mum look, I’m disabled. No need to pay anything. I may not survive much longer.’” They have not heard from him since and fear that he is dead.

Human rights activist and founder of Human Rights Concern Eritrea, Elsa Chyrum, said in a speech in January at the Eritrean Community Center in Boston, United States that the kidnapping of refugees has become common practice.

“This is done when the unsuspecting refugees are handed over to the highest of bidders from the Rashaida tribe (an Arab ethnic group in Eritrea and northern Sudan). The Rashaida take their human chattel all the way to Sinai (a peninsula in Egypt) at gunpoint.

“In the Sinai they give them to the Bedouin Arabs, and the new arrivals are tortured to reveal a number of a family member, often in the diaspora, for their extortion business. The family member is told that his brother, sister, niece or cousin is in their hands, and unless they can pay a certain amount of money, they will be killed.”

She said that the kidnapped refugees are tortured, raped, and murdered – their bodies used to harvest organs.

Eden said: “Those who can afford it pay huge amounts of money to smugglers or high-ranking officials in exchange for safe passage across the border.”

“Sudan has failed to stop its military from continually extorting money from refugees and collaborating with the kidnappers, and causing insecurity around refugee camps. In Egypt, the state is reluctant to arrest the kidnappers.”

But for many, remaining in Eritrea is not an option.

“For the last 21 years, Eritrea has been ruled by President Isaias Afwerki, who turned the country into a giant prison, and isolated it regionally and internationally,” Chyrum told IPS.

“The Eritrean constitution, with its extensive protection of rights, has been ignored. The national election, which had been scheduled for 2001, has been indefinitely postponed, and the national assembly effectively nullified.”

A number of Eritreans have been jailed for opposing Afwerki’s policies.

Amongst the detainees are 20 prominent critics and journalists and 15 top government officials, who have been held incommunicado for a decade. Some are feared dead.

“These were not ordinary people,” said Chyrum. “They include two former foreign ministers, ambassadors, chiefs of staff, and army generals who have done so much for the country and fought alongside the current president. The only crime they committed was to ask the president to implement the constitution.”

Eritreans also suffer limitations and restrictions on their right to freedom of speech and movement. And there is little religious tolerance in the country.

“Only four religious sects are allowed in the country,” Chyrum said. They are Sunni Islam, Eritrean Orthodox, Roman Catholic and Protestant.

“Can you imagine, in Eritrea, if you want a passport, your application has to be approved by a committee set up by the government?”

A UNHCR official who refused to be named told IPS that without the assistance of regional governments, the U.N. agency could not put a stop to the trafficking of Eritrean refugees.

“If people are being abducted, clearly we have to do more. But I do want to say that the UNHCR cannot do it without the governments of Sudan or Egypt. And so, we are talking to those governments. It is my strong belief that it is only the governments who are going to lead the way in this process,” she said.

But it may not happen soon enough.

“We’ve been talking since September 2012 about holding a meeting with the governments. We’re still talking,” the source said.

Sheila Keetharuth, the U.N. Special Rapporteur on the human rights situation in Eritrea, recognised the enormity of the task of preventing human rights violations in that country.

“I have to say that I have one of the most difficult mandates at the U.N. Human Rights Council,” she told IPS. “Up to now I cannot get access to the country, though right from the beginning, before I started talking to civil society, I knocked at the doors of Eritrean authorities. The door hasn’t opened up to now.”

*Names have been changed to protect identity.