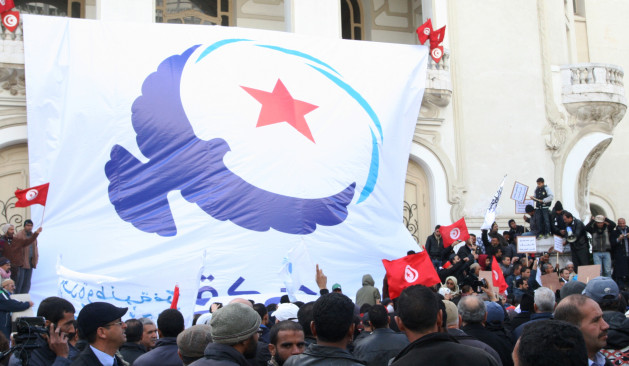 TUNIS, Jun 30 2013 (IPS) - In the third year after the revolution that toppled former dictator Ben Ali, true democracy is still work in progress in Tunisia.

“Freedom is a decision but democracy is a transformational process,” Amine Ghali, programme director of the Kawakibi Democracy Transition Centre in Tunisia tells IPS. “So far our expectations about life after the revolution have not been met.

“We went through a major transformation immediately after the revolution which led to the elections in October 2011. However, since then there has been a lack of delivery of democratic processes including transitional justice, the independence of the judiciary, improvement of the economy, and the fight against corruption. We need milestones with dates. We cannot stay in transition indefinitely.”

The democratic struggle is set against the backdrop of Tunisia’s economic problems. “We are facing inflation, devaluation of the dinar and a drop in consumer purchasing power,” says Ghali. “People cannot eat the constitution, drink elections or buy freedom of the press. They need food for their children, education and affordable transportation.”

"People cannot eat the constitution, drink elections or buy freedom of the press."

Despite these issues the transition to democracy in Tunisia has been relatively successful. Unlike the long and bloody revolutions in Libya or Syria, the departure of Ben Ali was swifter and more peaceful.

Tunisia has also avoided many of the difficulties faced by Egypt where growing resentment against the post-revolution government has led to protests and violence. Democratic elections in Tunisia, which were judged to be free and fair, were held just ten months after Ben Ali fled the country and resulted in the government of the moderate Islamic party Ennahda, that won the majority of the vote, heading a coalition.

However, the transitional government has faced major challenges. Ben Ali left Tunisia only a month after the revolution began, offering no chance for a carefully planned handover of power. Decades of rule under a dictatorship meant that many state institutions were corrupt, and a brutal security service had to be dismantled.

Moreover heavy, political repression and persecution meant that there was no significant opposition ready to take over. Politicians who had been languishing in Ben Ali’s prisons lacked political experience and necessary governance skills.

Osama Al Saghir, a member of the Ennahda party and the Constituent Assembly, admits that this may have contributed to some of the difficulties faced by the government. However, he tells IPS, “What we are trying to do is have ‘a clean hand’ and learn how to lead this country.

“The Tunisian people prefer to have a government that is learning than politicians who are stealing and involved in corruption, who put them in prison, torture them and deny them their rights. Today is very different from the first day in government and tomorrow will be even better.”

But people are growing impatient for change. There was an expectation that the new constitution would be written within a year of the elections but this date passed many months ago. Open consultation and debates about wording have contributed to lengthening the process, but some suspect there are other reasons for the delay.

“It’s a tactic,” says Ghali. “Ennahda’s popularity was dropping four or five months ago and it may have improved slightly now. Delaying the completion of the Constitution which must precede the elections will give them time to regain their popularity.”

On the streets of Tunis some people have other ideas. “The delay to the new Constitution is about money,” claims Mekni Abdesatta, a taxi driver. “The deputies are receiving a good salary so they want to keep the process going for three or four years and continue to receive the money.”

“These claims are not true,” says Saghir. “We want a great Constitution and so we don’t have a strict deadline. So far we have produced four drafts and we are now about to start on the final version.

“We have had an open dialogue with politicians from elected and non-elected parties, national and international experts, civil society and citizens across the regions and this is why the process has taken some time. We don’t want to be in a situation like Egypt where the Constitution was rushed through and now they are already talking about changing it again.”

Aside from the Constitution one of the most pressing concerns in the new democratic Tunisia is judicial reform. The government is in the process of establishing the High Commission of the Magistrates which will clearly separate executive power from the judiciary. But meanwhile a number of high profile cases highlight the seemingly arbitrary sentences that are currently being handed out.

Earlier this month a Tunisian rapper was given a two-year prison sentence for writing and performing a song which insulted the police. Three European Femen activists were given a four-month custodial sentence for carrying out a topless protest in front of the Tunisian Palace of Justice. Following an appeal the sentence of the Femen activists was later quashed.

In contrast to these cases, the 20 men accused of attacking the American Embassy in Tunis last year were only given two-year suspended sentences.

“These judgements are being made due to pressure. The government wants to put its hand on the judicial system,” Mehdi Zaoui, a lawyer from the political left and activist for democracy, tells IPS. “The previous minister of justice dismissed 82 judges last year (claimed to be over suspicion of corruption). I think this was a clear message to the other judges that if you don’t want to follow instructions you will be removed from your place.”

In the run-up to the elections the atmosphere is likely to get more tense. In the last few days there has been a heated debate about a proposed law for the ‘immunisation of the revolution’. According to the government this legislation would prevent former members of Ben Ali’s government and political party and other associates from standing as candidates at the election.

The opposition claims that the law could affect up to 60,000 people and that it is a way for the government to block political opponents. This discussion is particularly poignant given that Tunisians are still reeling from the assassination of Chokri Belaid, an opposition leader who was shot dead in February, in what is thought to be a politically motivated attack.