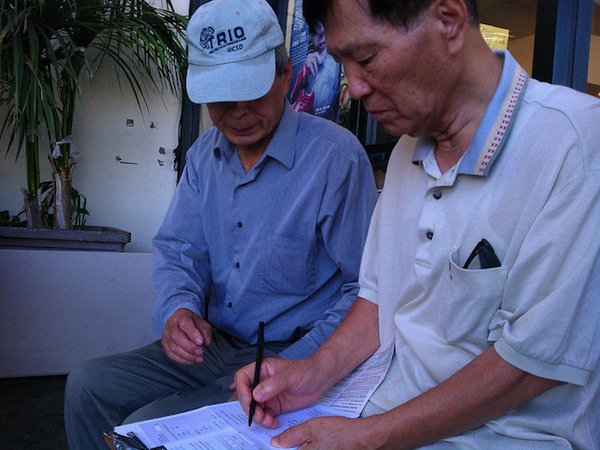 The Supreme Court has struck down requirements demanding proof of citizenship during voter registration. Credit: Korean Resource Centre/CC by 2.0

WASHINGTON, Jun 17 2013 (IPS) - In a landmark decision, the U.S. Supreme Court on Monday struck down voter application requirements demanding proof of citizenship, making it much easier for naturalised citizens to register to vote.

The decision looked at the National Voter Registration Act of 1993, which does not require proof of citizenship, as well as state-level legislation in the western state of Arizona. In a 7-2 decision, the nine Supreme Court justices ruled the state’s voting requirement, which has been in effect for two years, unconstitutional.

“The anti-immigration sentiment [in Arizona] is unconstitutional and people aren’t going to tolerate it,” Petra Falcon, executive director of Promise Arizona, an Arizona-based immigrant advocacy group, told IPS. “We need decision-makers that appreciate the diversity in our communities.”

The 1993 Voter Registration Act, known as the “Motor Voter” law, requires applicants to sign an oath, punishable as perjury, stating that they are U.S. citizens. But it does not require any proof.

“It’s extremely inadequate,” Arizona Attorney General Thomas Horne, who argued the case before the Supreme Court, said of the 1993 legislation in March. “It’s essentially an honour system. It does not do the job.”

Yet others have applauded the Motor Voter law, with civil liberties advocates suggesting that the legislation significantly eased voter registration by issuing a standard registration form nationwide.

Arizona went a step further, however, by requiring all first-time applicants to provide citizenship in the form of a birth certificate, a passport or naturalisation documents, without which the application would be rejected.

Several other states, including Alabama, Georgia, Kansas and Tennessee, have similar requirements, and Monday’s ruling will now directly affect those laws.

“The court has taken a vital step in ensuring the ballot remains free, fair and accessible for all citizens,” McDonald added.

The ACLU estimates that about 13 million people in the United States lack documentation to prove their citizenship. It also estimates that 31,000 Arizona residents who attempted to register during the two years the law has been in effect were denied, 90 percent of them born in the United States. And in two years in a single Arizona county, community voter registration reportedly dropped by 44 percent.

Advocates say Thursday’s ruling offers the opportunity to start healing some of those wounds.

“Justice is on our side,” Falcon told IPS. “We are working towards rebuilding a united Arizona and one Arizona, rather than a divided Arizona.”

State officials can also check other information on the voter registration form and refuse to register the applicant if it turns out they are not citizens.

Conservatives’ response to the ruling has already been fierce.

Monday’s decision comes as voting rights activists eagerly await another race-based voting case before the Supreme Court. This case deals with a section of the Voting Rights Act of 1965 that requires states with a history of discrimination, including Arizona, to receive clearance from the Justice Department before they change their voting laws.

That decision is expected within days.

Arizona has been in the vanguard of a new spate of conservative-led state governments attempting to crack down on illegal immigration. Last year, the Supreme Court also decided that a number of laws in Arizona were unconstitutional.

Yet the most controversial one, a law requiring police officers to check the immigration status of anyone they suspect of being an illegal immigrant, was allowed to stand. Critics say the court’s decision greenlighted racial profiling.

“This is a country of immigrants but also of U.S. values,” said Falcon. “We want to embrace those values rather than run away from them and abuse them.”