UNITED NATIONS, Jul 1 2013 (IPS) - The United Nations has singled out China – the world’s most populous country with over 1.3 billion people – as one of the key success stories in the longstanding battle against poverty. 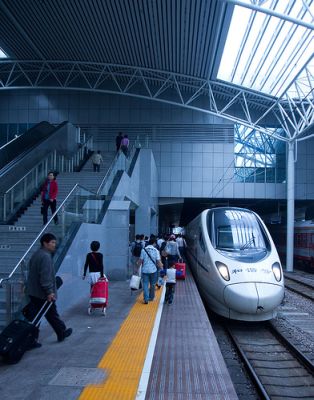 Although extreme poverty rates have fallen in every developing region, says a new 60-page report released here, China is way ahead of the pack.

Still, “poverty remains widespread in sub-Saharan Africa and Southern Asia, although progress in the latter region has been substantial,” according to the Millennium Development Goals (MDGs) Report 2013, released Monday.

Following the launch of the report in Geneva, Secretary-General Ban Ki-moon hailed the MDGs as “the most successful global anti-poverty push in history”.

The study takes stock of the successes and failures of the MDGs – aimed primarily at fighting poverty, hunger, illiteracy, disease and gender discrimination – which were approved at a summit of world leaders in September 2000, with a targeted deadline of 2015.

Despite impressive achievements at the global level, the study said, 1.2 billion people are still living in extreme poverty.

While trumpeting some of the successes, including big gains in improved health and reduction in hunger, the report says progress towards achieving the MDGs has been uneven – not only among regions and countries but also between population groups within countries.

The study also says that over two billion people gained access to improved sources of drinking water and there were “remarkable gains” in the fight against malaria and tuberculosis.

The bad news is that environmental sustainability is under severe threat, too many children are still denied their right to primary education, and there is less aid money overall, with the poorest countries most adversely affected.

“But it happened mainly before the year 2000, and thus cannot be honestly attributed as a success of the MDGs,” he added.

In fact, it is a mere statistical victory due to a lowering of the goal, he argued.

While the 2000 Millennium Declaration clearly said that “more than a billion people are currently subjected to extreme poverty” (paragraph 11) and therefore resolved “to halve, by the year 2015, the proportion of the world’s people whose income is less than one dollar a day” (paragraph 19), the first MDG was explained as meaning “between 1990 and 2015”.

Thus, the bar was lowered and the goal was proclaimed as having been achieved in 2010, even when at that date the official number of people in extreme poverty was 1.3 billion, 30 percent more than in 2000, he pointed out.

Shobha Das, director of programmes at the London-based Minority Rights Group (MRG), told IPS that the MDGs served to build a global discourse around development needs, and they have achieved much.

“However, the MDGs appear to have consistently failed minorities and indigenous peoples around the world,” she said.

For example, in India, poverty rates have remained higher for minorities and indigenous peoples as compared to the overall population, she noted.

In Uganda, rates of malnourishment are higher for the minority pastoralist population than for non-pastoralists.

In Peru, a lower proportion of children from the Afro-Peruvian community complete primary school than the overall national rate.

A key reason for these disparities, she pointed out, is that governments have not been encouraged or incentivised to resist cherry-picking in the scramble to meet MDG targets.

An eye on inequality is therefore key to the success of the proposed Sustainable Development Goals (SDGs), to be launched as part of the U.N.’s post-2015 development agenda.

“Without clear targets to reduce inequality and spread the benefits of development equally, it is all too likely that the failures of the MDGs for minorities and indigenous peoples will be repeated post-2015,” she said.

Tom Berry of the UK-based Development Initiatives, an international NGO focusing on the analysis and use of data for poverty eradication, told IPS that the MDGs have provided a clear and simple framework that has successfully mobilised support for poverty reduction, contributing to an increase in financial resources and greater co-ordination of development efforts between different actors.

He said many of the goals have been met and this has transformed lives – around 700 million fewer people live in absolute poverty, over two billion people have gained access to water, and mortality rates from malaria have fallen by 25 percent.

Bissio told IPS the analysis of indicators made by his own organisation, Social Watch, and other independent researchers actually shows that the speed of progress in the main social indicators, such as infant mortality or primary education, was faster in the last two decades of the 20th century and declined after the year 2000, in spite of the MDGs.

The World Bank and the different drafts for a post-2015 agenda claim that “for the first time ever” it is now possible to eradicate extreme poverty by 2030.

He said nobody seems to remember that back in 1973, then World Bank president Robert McNamara had established the “ambitious goal” of “eradicating absolute poverty before the end of this century” (that is, the past century).

The poverty line was then 0.30 cents, which adjusted for inflation would be 1.75 dollars, and now adjusted for global economic growth would be way over two dollars.

Instead, the new line is fixed at 1.25 dollars, which implies a new lowering of the bar, he added.

By doing so an easy victory is ensured, since World Bank projections say that this is going to happen anyhow, according to current trends. This lowering of the bar helps hide increased inequalities around the world and also hides the reality of poverty in developed countries, said Bissio.

Paradoxically, the International Monetary Fund (IMF) is now saying that poverty in developed countries and inequalities everywhere are an obstacle for recovery of the global economy.

“A new development agenda should focus on inequalities, social and gender justice and respect for planetary boundaries, with equitable burden-sharing in the responsibilities of redressing unsustainable production and consumption patterns,” Bissio said.

Asked where the goals failed, Berry said despite incredible progress, some of the poorest and most marginalised groups have been left behind.

Also, the MDGs have also been criticised for their lack of ambition, seeking to reduce rather than eliminate poverty.

“They have failed to establish and monitor clear commitments for developed countries, they have not addressed key environmental issues such as climate change, nor important structural issues such as governance, transparency and accountability,” he noted.

Berry said the post-2015 framework offers us an opportunity now to take a more holistic approach around a sustainable development agenda.