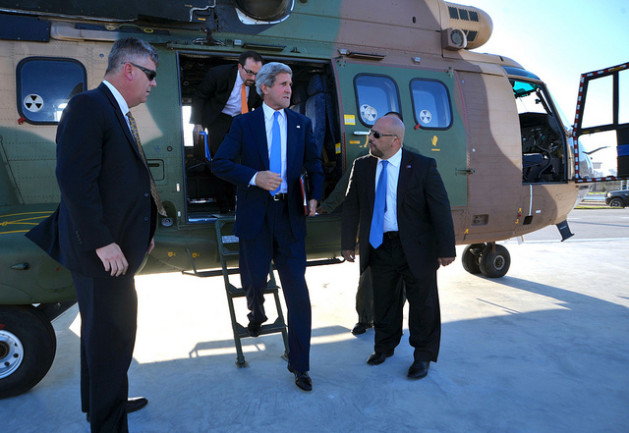 WASHINGTON, Jul 23 2013 (IPS) - There is a real opportunity for peacemaking between Israel and the Palestinians, even though the obstacles are more formidable than in the past. That was the assessment of former U.S. president Jimmy Carter, speaking Monday at a public event which posed the question “Can the Two-State Solution Be Saved?”

“This is a propitious time because there has been a five-year absence of the two parties coming together and they’ve been very resistant even to accommodation to come together,” Carter said.

“So that’s an encouraging sign. There is great pressure on both leaders not to come to table if [the negotiations are] based on borders. Palestine will ask the U.S. to state [what is] their official position and international law, which is that terms must be [based on] the 1967 borders, and land swaps can only happen in free and fair negotiations.”

But Phyllis Bennis, the director of the New Internationalism Project at the Institute for Policy Studies, thinks the framework for negotiations between Israel and the Palestinians is inherently flawed and until that changes, there is no chance for successful talks.

“Whatever [U.S. Secretary of State John] Kerry promised to get the two leaders to agree to negotiations, these talks about talks will never break out of their 22-year-long failure until the whole premise changes,” Bennis told IPS.

“You can’t hold talks between a wealthy, powerful, U.S.-backed nuclear-armed occupying power and a dispossessed, impoverished, occupied, unarmed population and pretend they come to the table as equals,” she said.

“It’s not surprising that all sides want to keep the terms secret – [Israeli Prime Minister Benjamin] Netanyahu’s cabinet is already rejecting the talks, and [Palestinian President Mahmoud] Abbas has virtually no support for returning to talks while settlement building continues apace. What’s needed is an entirely new kind of diplomacy – not grounded in Israeli power but in international law and human rights.”

Carter also acknowledged that circumstances are quite different than they were when he brokered the peace treaty between Israel and Egypt.

“There was no demand on me to engage in peace talks,” Carter recalled. “But [Egyptian president] Anwar Sadat and [Israeli prime minister] Menachem Begin were strong, courageous, and wise enough to reach an agreement. I think what Secretary Kerry faces now may be more formidable. But the key issue is whether the people will prevail on their leaders to make peace.”

Kerry announced last week that a formula had been found that would bring Israel and the Palestinian Authority back to the negotiating table after a nearly five-year long hiatus.

But the Palestinians have said they are not yet committed to the new round of talks, as they expect negotiations to be based on the 1967 borders. Israel, for its part, has announced a release of long-held Palestinian prisoners as a good will gesture, but has also been reported to be pressing Kerry to amend the terms of reference to include Palestinian recognition of Israel as a Jewish state.

Despite this lack of commitment from the parties, preparations are going forward. Reports from both Washington and Israel indicate that the former U.S. ambassador to Israel, Martin Indyk, will be named as the lead negotiator for the U.S. team.

And both the Palestinians and Netanyahu have declared that any agreement reached will be subject to a public referendum.

Carter believes the referendum idea is a good one, not only to confirm the legitimacy of any deal that might be struck, but also as added pressure on the leaders to come to an agreement he believes both sides still very much want.

“I think the referendum is a good idea, because Prime Minister Netanyahu also said he would not formalise an agreement without a referendum. This is exactly the same as Hamas’ position,” Carter said referring to the long-held stance by the Islamist leadership in the Gaza Strip.

In December 2010, Gaza’s Prime Minister Ismail Haniyeh of Hamas said, “Hamas will respect the results [of a referendum] regardless of whether it differs with its ideology and principles.”

Carter continued, “I think [a referendum’s] good, because if leaders accept an agreement I think it almost guarantees people back home will accept the same thing.”

Many observers have noted the ongoing divisions between the Palestinian Authority and Hamas, the continued unwillingness of the United States and Israel to negotiate with a Palestinian government that includes Hamas, and the anti-peace stance of much of Israel’s ruling coalition, including Netanyahu’s own Likud party. All of these factors generate a great sense of pessimism.

Carter believes that if a deal is worked out that the leaders of both sides agreed upon, there would be overwhelming support for it.

After meeting with the leader of J Street, which calls itself a “pro-Israel, pro-peace” lobbying group, he said, “I pray that if progress is made toward a two-state solution, it will have support not only on a worldwide basis, but also in America even from those who might not have thought this is possible.” Yet even he recognises major obstacles.

Asked by IPS about Israel’s determination to maintain a long-term presence in the Jordan Valley, something the Palestinians are never likely to accept, Carter said, “The Jordan Valley was never mentioned as being controlled by Israel after peace in my day. We anticipated that Israel would withdraw from all of Palestine east of the green line. I am not sure the Palestinians will ever accept Israeli control of Jordan Valley.”

Carter also stated that Israel’s occupation was a violation of its commitment to United Nations Security Council Resolution 242 but that if the 1967 borders were the basis for resumed talks, that would “honour the basic thrust of 242″.

Carter added that Palestinians would have to resign themselves to only a token return of refugees to Israel and that their right of return would have to be exercised only in the West Bank and Gaza Strip.