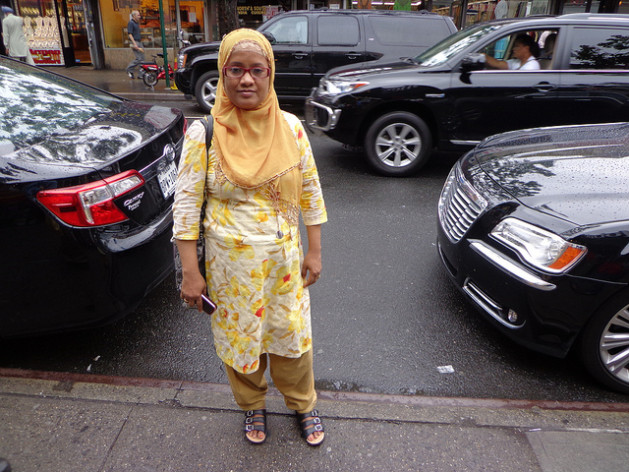 Kazi Fouzia in the street where she had an accident in 2010. Her shoulder sustained multiple fractures, but the only treatment she received was painkillers as she was undocumented at the time. Credit: Silvia Romanelli/IPS

NEW YORK, Jul 22 2013 (IPS) - Ataur was 18 when he left Bangladesh and arrived in the United States in 1991 as an undocumented migrant. He took two jobs at the same time, earning about 35 dollars a day in total.

Vincent was smuggled into the U.S. from China in 2001. Ten years after Ataur, his working conditions were even worse. He worked in several Chinese restaurants, for 60 to 70 hours a week, six days a week, for about 300 dollars a month, an average of one dollar per hour.

Both asked that only their first names be used.

“In New York, if you go in the street … if you ask 10 people, I’m sure at least five or six are undocumented,” Vincent told IPS, while talking in a café in New York’s Chinatown.

The U.S. is home to more than 11 million undocumented workers, and there are an estimated two million migrants working in the city of New York.

They are taxi drivers, domestic workers, restaurant, retail and construction workers. They are paid far less than the 7.25 dollars per hour that is New York’s minimum wage, and they are often mistreated by their employers.

Their lives may undergo major changes if the U.S. House of Representatives approves an immigration bill, passed by the Senate at the end of June, which offers a 13-year path to citizenship for undocumented migrants, but also reinforces border security and enables businesses to check workers’ social security numbers, under the E-verify programme.

The programme would make “every single undocumented person one click away from being notified or deported,” according to Monami Maulik, executive director of Desis Rising Up and Moving (DRUM), an organisation of low-wage South Asian immigrants in Jackson Heights, Queens, which counts 2,000 members.

“Our members… and many others in immigrant communities are really disappointed with this legislation. It’s turning out to be more and more repressive, harsher measures,” she said. “So we are following it very closely.”

After Latinos, she added, South Asians are among the second largest undocumented population in New York.

Employers tend to say, “I hire you even if you’re illegal, so you should say ‘thank you’, no matter how much I pay you,” Vincent told IPS.

Because there are so many undocumented migrants ready to work for extremely low wages, other needy workers are pressured to accept the same conditions, no matter what their immigration status and nationality are.

Ataur’s sister, Amana, arrived legally in the U.S., but was still paid less than the minimum wage for eight years.

“Employers often don’t pay workers for a week or months at a time. There has been a case of a year at a time. They’ll do things like hold people’s passports, threaten to call immigration if they ask for the wages that they earned,” Maulik told IPS.

In 2009, DRUM launched monthly “workers’ rights clinics”, to help migrant workers reclaim their stolen wages and raise awareness of their own rights.

In a phone interview, Sayma Khun, a Bangladeshi national, told IPS how she managed to recover, with the help of DRUM, 5,000 dollars of unpaid wages from her previous employer.

Similarly, in 2008, Vincent, together with other 35 co-workers, filed a lawsuit against their employer, in this case with the help of the Chinatown-based Chinese Staff and Workers Association (CSWA).

But as soon as the lawsuit was filed, the restaurant was shut down. It re-opened some time later in a different location under a new name, a strategy widely used by Chinese employers to avoid lawsuits, according to Vincent.

“By federal law this is not supposed to happen. Even undocumented workers are protected under U.S. labour laws around minimum wage,” Maulik told IPS.

In order to launch a neighbourhood-wide investigation on workers’ rights respect, the Department of Labour needs a certain number of individual complaints. But workers often refrain from complaining because they fear employers’ retaliation and deportation.

The husband of Nadera Kashem, a Bangladeshi DRUM member, is at risk of being deported, after he was caught, last year, during a police raid in the perfume shop he worked in. Because he was undocumented, he was sent to an immigration detention centre. He’s been there for 17 months now.

In these cases, “The employer is supposed to be punished, but it always means the worker is punished,” said Maulik.

At the local level, immigration is being enforced by police officers, often accused by migrants’ rights organisations of profiling and discrimination.

“The biggest fear an undocumented person has is the local police officer, because that’s the person who’s going to stop you, ask you for identification, possibly deport you,” Maulik said.

Finding the courage to speak up

“We see no future, why are we still working like slaves? So that’s why I organised my co-workers, we wanted to improve the working conditions, and not just for ourselves,” Vincent told IPS.

Before joining CSWA, he said, he didn’t even know that there was a minimum wage or what “overtime” meant.

“Organising protects you, never puts you in trouble,” is what Kazi Fouzia, a Bangladeshi community organiser who joined DRUM in 2010, says to other migrant workers to encourage them to speak up.

Fouzia used to work in a retail sari shop in Jackson Heights, Queens. Her employer owned three stores; one day he asked her to go get some clothes from another shop across the street. While she was crossing, she was hit by a car and thrown 13 feet.

Fouzia’s employer didn’t allow her to call 911 because she was undocumented. She had multiple fractures in her shoulder, but she didn’t have insurance so the only medical care she received were painkillers. The next day she discovered she had been fired.

This is not only her personal story, she told IPS, “This is every undocumented worker’s story, every one.”