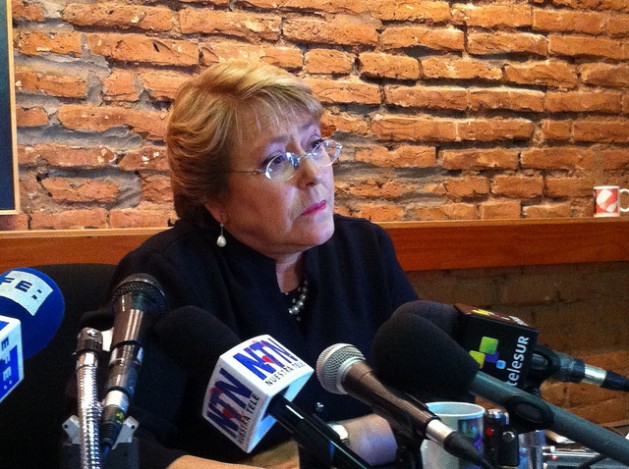 Michelle Bachelet: "This is not about two similar women standing for the presidency." Credit: Marianela Jarroud/IPS

SANTIAGO, Aug 20 2013 (IPS) - “There’s something sexist about saying that the candidates are two women. Has anyone ever remarked on it when the candidates are two men?” former Chilean president Michelle Bachelet complained about comparisons between herself and her main rival in the presidential elections, rightwing candidate Evelyn Matthei.

The Nov. 17 elections are the first electoral race in Latin America in which the two main presidential candidates are women.

Chile does not have a quota law to facilitate women’s access to elected posts. During the Bachelet administration (2006-2010) the political parties rejected a bill she sponsored that would have not only created quotas for women, but economic benefits for female candidates as well.

The race between two women for the country’s presidency appears to be a “definite” advance on the road to gender equality, Maricel Sauterel, head of projects for Comunidad Mujer, an organisation that advocates women’s participation in the workplace and politics, told IPS.

It also “shows that Chile is evolving. Twenty years ago, it would have been impossible to have even a single woman candidate,” she said.

Bachelet, a 61-year-old socialist paediatrician who headed the United Nations Entity for Gender Equality and the Empowerment of Women (U.N. Women) until March, is the candidate of the Nueva Mayoría (New Majority) coalition.

The former president, the front-runner in the polls, was elected as her coalition’s candidate with 73 percent of the vote in the Jun. 30 primaries.

Her rival Matthei is a 59-year-old economist belonging to the rightwing Independent Democratic Union (UDI). Until July she was labour minister in the government of conservative President Sebastián Piñera.

“When the candidates are men, important issues are discussed rather than circumstantial details,” Bachelet said in response to a question from IPS at a press conference for foreign journalists. “I am delighted that women are participating in politics and I will continue to promote this, but make no mistake, this campaign is about two very different visions of this country.”

Chilean women were not able to vote in presidential elections until 1952, three years after they won the right to vote.

It took a further 50 years for the first female president to be elected, although women make up 53 percent of voters and 43 percent of the workforce in this country of 17.5 million people.

But women hold only 12.7 percent of the seats in the lower house of Congress and just five percent in the Senate.

According to a report by the Economic Commission for Latin America and the Caribbean (ECLAC), in 2005 women’s representation in the lower house of the Chilean legislature was 14.2 percent, compared to a regional average of 22.4 percent.

According to economist Gloria Maira, deputy editor of the feminist online newspaper La MansaGuman, while the women’s candidacies “are a milestone showing we can reach these positions in politics, at the same time they do not imply major transformations for women’s needs and concerns.”

The present contest has other facets beyond the demand for gender equality, involving the candidates’ personal lives: Bachelet and Matthei were childhood playmates when their fathers were both air force generals and close friends, until they were torn apart by the 1973-1990 dictatorship of General Augusto Pinochet.

The coup that overthrew the government of socialist president Salvador Allende on Sept. 11, 1973 left an indelible mark on both families.

General Fernando Matthei became a member of the military junta that acted as the country’s legislature, while Alberto Bachelet, who cooperated with food distribution during the Allende government, was arrested by his comrades-in-arms for “treason,” and was tortured to death.

Michelle Bachelet has told how she watched from the roof of the medical school where she was a student as air force planes bombed the government palace, with Allende inside, where he met his death during the coup.

At the time, Evelyn Matthei was in the United Kingdom, studying to become a concert pianist.

Matthei helped the Chilean military government’s embassy in London with translations, while Bachelet joined the resistance in Chile and helped hide dissidents until she too was arrested, in 1975. With her mother, Angela Jeria, she was held in an illegal detention centre and they were both tortured.

“This is not about two similar women standing for the Chilean presidency,” Bachelet said on Aug. 13.

“There is one vision of the country that wants to continue with what the present government has been doing, and there is another, which I represent, that wants structural changes to mount a decisive challenge against inequality,” she said.

“And I want this to be an element of a more harmonious, comprehensive development project appropriate for the entire country,” she said.

Maira, of La MansaGuman, said it was significant that one of the candidates is Bachelet, “a woman who broke with tradition by becoming Chile’s first woman president and the first head of U.N. Women, and who supports women’s participation in politics.”

She added that “Matthei, although she has a good track record and has worked hard in politics, is not a person who supports women’s rights; she never has.”

As a senator, Matthei had “a more or less liberal attitude on therapeutic abortion,” Maira said, even presenting a bill to decriminalise abortion under certain circumstances. However, when she became a candidate, her position changed radically, she added.

“It’s a complex issue and I am not going to propose it because the majority of my political sector do not support it,” Matthei said recently.

Chile’s abortion laws are extremely restrictive, with abortion regarded as a crime even when the mother’s life is at risk or when the pregnancy is the result of rape or incest.

In Maira’s view, this shows that Matthei “is willing to keep silent on issues that are of prime importance to women.”

Comunidad Mujer’s Sauterel said that in spite of the progress represented by the campaign, it is vital not to forget the pending debts to women.

“People often say, ‘What more do they want, if they have a woman president?’ We have to be careful about this,” she concluded.