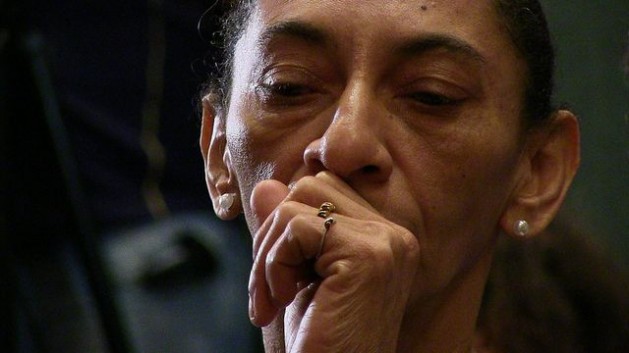 Elizabeth Gomes, the wife of Amarildo de Souza, who has been missing from the Rocinha favela in Rio de Janeiro since Jul. 14, 2013. Credit: Fabíola Ortiz/IPS

RIO DE JANEIRO, Aug 19 2013 (IPS) - Over the last two decades, nearly 92,000 people have gone missing in the Brazilian state of Rio de Janeiro, according to official figures and academic studies. Most of the cases have been shelved with little or no investigation.

Amarildo de Souza, 43, lived in Rocinha, one of the biggest of the favelas or shantytowns that line the hills ringing the city of Rio de Janeiro, the state capital.

His small 10-square-metre house on a narrow alleyway called “Roupa Suja” (dirty clothes) at the top of the hill was home to himself, his wife and their six children.

The neighbourhood has no sanitation, running water, garbage collection or street lighting.

“The UPP police took my husband away, and his documents. He went missing a month ago and I have no money. At least I want his bones, to bury them. I want an answer: Where is Amarildo?” -- Elizabeth Gomes

To support his family, de Souza worked in construction and did odd jobs. When he wasn’t working, he would go fishing.

On Sunday Jul. 14 he came home after fishing. At the door to his house he was met by a group of 20 military police officers who said they needed to take him to the local Police Pacification Unit (UPP) for questioning.

The UPPs were created by the Rio de Janeiro state government to establish a sustained police presence in the favelas and drive out the drug trafficking gangs. The community policing and crime prevention strategy launched in 2008 is complemented with social programmes, such as bringing piped water, sanitation, education and other services to the favelas.

Rocinha was “pacified” in September 2012, when the police occupied the vast favela and forced out a drug gang that controlled the area, where heavily armed drug traffickers used to be a routine sight.

De Souza was last seen getting into the police car.

His case became another focus of the near-daily protests that have been held in this city over the last two months. His face can be seen on posters plastered around the city, above the question “Where is Amarildo?”

“There are a series of irregularities in what the police did,” Amnesty International adviser Jandira Queiroz told IPS. “If [de Souza] was wanted for questioning, he would have only had to go to the local police station, rather than UPP headquarters. These mistakes on the part of police merit investigation, in and of themselves.”

Amnesty International is urging its three million supporters worldwide to send letters to the state government and ministry of security calling for a thorough investigation, witness protection, and prosecution of the perpetrators.

“The police say they let him go,” said Queiroz. “Nothing has been found so far, and there is no evidence of where he – or his body – could be. If he died, his family at least wants to give him a decent burial.”

The UPP headquarter’s surveillance cameras, which could confirm the police claim that he walked out of the station, weren’t working that night. And the GPS devices in the police cars that picked up de Souza were not hooked up.

The civilian police are treating the case as a homicide, possibly committed by UPP federal agents or by drug traffickers.

The family is losing hope of finding him alive. The climate in the neighbourhood is one of frustration and a feeling of insecurity and lack of protection.

An indignant Elizabeth Gomes, de Souza’s wife, said: “The UPP police took my husband away, and his documents. He went missing a month ago and I have no money. At least I want his bones, to bury them. I want an answer: Where is Amarildo?”

This high-profile disappearance drew attention to the cases of hundreds of people who have gone missing without leaving a trace. Police officers were the main suspects in many of the unresolved cases.

According to the Public Security Institute, an average of 15 people a day go missing in the state of Rio de Janeiro. The most frequent causes are murders, domestic disputes, and mental problems.

But the statistics are not updated when a missing person case becomes a homicide, for example, after a body is found.

A study by Fábio Araújo, a sociologist at the Federal University of Rio de Janeiro, found that 91,807 people went missing in the state between 1991 and May 2013.

In his report, Araújo says the police are “extremely violent,” as are the militias – bands of off-duty members of the police or military involved in extortion and other forms of organised crime – and drug trafficking gangs. “These actors sometimes fight and sometimes cooperate to make bodies disappear,” he said.

On Aug. 13, families of missing persons and activists took part in a public hearing organised by the human rights commission of the Rio de Janeiro state legislature.

“My sister’s car was shot up by the police, and she has been missing for five years,” said Adriano Amieiro, the brother of Patrícia Amieiro, a 24-year-old engineer who went missing in June 2008. “I don’t think we’ll ever see her again. Our family has not been able to have closure; we have no body to bury,” he told IPS.

A bill currently moving through the Senate would classify the crime of forced disappearance in a new article in the penal code.

In Brazil, bodies are often made to disappear, because when no body is found, police stop investigating.

“This is a country of impunity when it comes to crimes against life,” Antônio Carlos Costa, the head of Rio de Paz, a local NGO, told IPS. “Thousands of people disappear and the authorities don’t worry about finding out what happened to them. Many cases are never even registered in police stations, and the police are among those who carry out this practice.”

According to Costa, although the statistics are “chilling,” the number of people who go missing is actually higher than the official figures, and there are clandestine cemeteries all around the city and surrounding areas.

“We live in a culture of banalisation of the loss of human life, which is reflected in the powers-that-be,” Costa said.

The chair of the state legislature’s human rights commission, lawmaker Marcelo Freixo, said “deep contradictions” emerged in the investigations into de Souza’s disappearance. In the second week of August, he sent an official request asking the prosecutor’s office and the civilian police to clarify the discrepancies.

In the legislator’s view, the police claim that de Souza may have been linked to drug trafficking in Rocinha was an attempt to “discredit the victim” and the complaint that he had gone missing.

Freixo told IPS that there was no indication that de Souza or his family were involved in drug trafficking.

He proposed the creation of a task force involving representatives of the prosecutor’s office and the state ministries of security, social assistance and human rights, to investigate cases of missing persons in the state.