WASHINGTON, Aug 10 2013 (IPS) - The controversial topic of medical cannabis has been put under a microscope after the internationally known neurosurgeon Dr. Sanjay Gupta came out in support of its use this week. 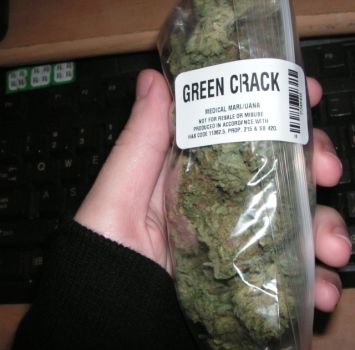 An ounce of “Green Crack” bought from a dispensary in California. Credit: Coaster420/public domain

In a lengthy opinion piece on CNN, Gupta outlines the benefits of medical cannabis, claims that U.S. citizens have been misled by the government for years, and apologises for his role in that. This reversal of opinions occurred during the yearlong production of his documentary “Weed”, which premiers this Sunday on CNN.

“Gupta literally made a 12 or 13 year turn on this,” the executive director of the advocacy group NORML, Allen St. Pierre, told IPS. “But as a really genuine doctor who is a scientific minded person, he really did want to see the science and let it led him to a different standing.”

Illinois is the most recent state to legalise medicinal marijuana, making a total of 20 U.S. states and the District of Columbia that allow its medical use. Approval conditions, regulations and quantity limits can vary from state to state.

The federal law enforcement agency, the Drug Enforcement Administration (DEA), has classified marijuana as a Schedule I drug, meaning it has no medical benefit and has a high potential for abuse, with nine to 10 percent of its adult users becoming addicted.

Cocaine, according to the DEA, is less dangerous than marijuana and is a Schedule II drug even though 20 percent of its users become addicted.

“They didn’t have the science to support that claim [of marijuana as a Schedule I drug], and I now know that when it comes to marijuana neither of those things are true,” wrote Gupta in his CNN piece. “It doesn’t have a high potential for abuse, and there are very legitimate medical applications.”

Gupta uses Charlotte Figi, a patient in Colorado, as an example of the benefits. She began having seizures soon after birth, and by age three she was having up to 300 a week despite being on seven different prescription medicines. Medicinal cannabis calmed her brain and limited her seizures to two to three times per month.

According to NORML, cannabis is specifically used to alleviate pain from nerve damage, nausea, spasticity, glaucoma and movement disorders. It is also a powerful appetite stimulant, which is beneficial for patients suffering from dementia, HIV and AIDS.

“The government and some of our opponents will say with a straight face that it [medical marijuana] has no utility,” St. Pierre told IPS. “It is cheaper than most pharmaceuticals and can be used for over a dozen aliments. The utility combined with the price makes it hard for them to make a convincing argument.”

“Most frightening to me is that someone dies in the United States every 19 minutes from prescription drug overdose, mostly accidental,” Gupta wrote. “It’s a horrifying statistic. As much as I searched, I could not find a documented case of death from a marijuana overdose.”

According to a study done in the United Kingdom, people who smoke marijuana regularly tend to produce less dopamine, a feel good chemical in the brain that plays a large role in reward-driven behaviour and motivation. Regular marijuana use can also lead to inflammation in the brain, according to the study, which can affect coordination and learning.

Gupta also admitted in his CNN piece that regular marijuana use in younger and developing brains can lead to a permanent decrease in IQ. There is also clear evidence that some users can experience withdrawal symptoms including insomnia, anxiety and nausea.

“Much in the same way that I wouldn’t let my own children drink alcohol, I wouldn’t permit marijuana until they are adults,” wrote Gupta. “If they are adamant about trying marijuana, I will urge them to wait until they’re in their mid-20s when their brains are fully developed.”

Project SAM, the nonprofit organisation advocating for the responsible use of medicinal cannabis, is urging Gupta to clarify what he is referring to when he says marijuana. According to the organisation, CBD is a non-intoxicating element found in medically used cannabis whereas street bought marijuana contains THC, which is specifically used to get a high.

“Dr. Gupta is a person Americans looks up to with high esteem. And for good reason – he is thoughtful, thorough and dispassionate about the science. That is why we are troubled by how people might interpret his comments,” Project SAM said in a press release.

Despite the highly documented consequences and concerns, marijuana is the third most popular recreational drug in the United States, behind alcohol and tobacco. About 100 million citizens use it, and about 14 million do so regularly.

Some 50,000 people each year die from alcohol poisoning and 400,000 people die from tobacco each year, but marijuana is a non-toxic drug that cannot cause death by overdose.

“The fact that this guy [Gupta] enjoys a really wonderful national reputation, and now he is saying ‘my bad’ in a culture where alpha males don’t usually admit that they are wrong, will…affirm that we are in an era of change,” St. Pierre told IPS.