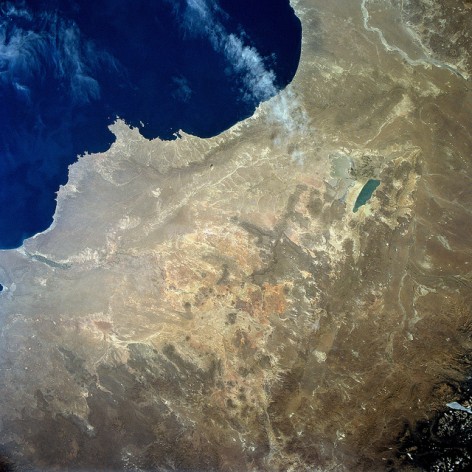 Satellite image of the Gulf of San Jorge in Argentina's Patagonia region, rich in shale gas and part of the world's second largest reserve after China, according to the U.S. Energy Information Administration. Credit: IPS/Photostock

MEXICO CITY, Aug 18 2013 (IPS) - Non-governmental organisations are putting pressure on multilateral financial institutions not to finance production of shale gas by hydraulic fracturing or fracking because of the high environmental costs they say are associated with this method.

“I think it’s terrible: fracking is one of the techniques posing the highest risk to availability of drinking water in the country,” Nathalie Seguin, the coordinator of the Freshwater Action Network in Mexico (FANMEX), which works for water sustainability, told IPS. “These plans make no sense and must be thwarted.”

“Sound scientific research in several parts of the world has clearly shown a high risk of leaching from vertical wells into water tables,” she said.

Fracking is the technique used for large-scale extraction of non-conventional fossil fuels trapped in rocks, like shale gas.

To release the natural gas, huge volumes of water containing toxic chemicals are pumped underground at high pressure, fracturing the shale. The process generates large amounts of waste liquids containing dissolved chemicals and other pollutants that require treatment before disposal.

Timothé Feodoroff, with the Agrarian Justice Programme of the Amsterdam-based Transnational Institute (TNI), said “Some international institutions are keen to finance fracking. It’s a real risk” that they will invest in the method.

Feodoroff is a co-author, together with Jennifer Franco and Ana María Rey, of a report published in January titled “Old Story, New Threat: Fracking and the global land grab”, which reveals that “behind the scenes in the worldwide scramble for unconventional gas exploration and extraction are a wide range of public and private transnational, national and institutional actors.”

The actors include technology providers, oil and financial companies, governments, lobbying firms and even academic institutions.

“We found that the money was given by Wall Street firms; there is a lot of speculation around fracking. In the 2007 subprime crisis they did the same. There are a lot of investment banks involved, the speculation isn’t over,” Feodoroff told IPS.

The International Finance Corporation (IFC), the private sector lending arm of the World Bank, assured IPS it had no plans to grant any loans for hydraulic fracturing.

However, the IFC owns 10 percent of the Agiba Petroleum Company, made up of Egypt’s General Petroleum Corporation, Italy’s Eni SpA and Russia’s Lukoil, which carries out fracking in the “Falak” and “Dorra” fields in the Egyptian desert.

The Inter-American Development Bank, which did not reply to IPS’ request for information about its plans to finance fracking, published a report in December by David Mares titled “The New Energy Landscape: Shale Gas in Latin America”, which is not available to the public.

But another report, “Shale Gas in Latin America: Opportunities and Challenges“, by the same expert, analyses the outlook for shale gas in the region.

“The main issues that will determine which Latin American countries become part of the shale gas revolution revolve around the needs of investors, the state of the environmental debate, and the ability of the state to provide security for exploration and production operations,” says the report, published in July by Inter-American Dialogue, a Washington-based think tank.

Mares says that development of shale gas resources will vary from country to country, and that financing may come from local sources, foreign direct investment, investment portfolios, and state investment and loans.

Mexico’s state oil company PEMEX has drilled at least six wells in shale rock in this country since 2011 in the northern states of Nuevo León and Coahuila, and the state Mexican Institute of Petroleum (IMP) is preparing for 18 months of geological exploration in the southeastern state of Veracruz at a cost of 245 million dollars.

IMP plans to drill 20 wells by 2016, with an investment of over two billion dollars, and in the next 50 years plans to have 6,500 wells in commercial operation.

NGOs are considering launching an international campaign against the financing of fracking, and are preparing worldwide actions for Global Frackdown Day, to be held Oct. 19.

Seguin said, “The problem is the heavy pressure from private companies and governments for financing these activities.

“It is in the interests of the multilateral financial institutions to lend money. They support infrastructure mega-projects because it is the easiest way to trap countries into debt and to maintain themselves. This financing runs counter to their own environmental and social standards. Why should we exploit shale gas, when it is a major threat?” she asked.

Six organisations have joined together to create the Mexican Alliance Against Fracking, which has not yet decided whether to call for a moratorium or an outright ban on the method in a forthcoming report on the energetic, economic, social and environmental aspects of shale gas.

Feodoroff said, “It’s possible that big banks influence the multilateral agencies. We are warning about corporate power” over their decisions.

The Dutch Rabobank Group, a sustainability-oriented cooperative financial services company specialising in agricultural products and commodities, announced that it would not lend funds for exploration and production of shale gas, a move that experts hope will be imitated by other private institutions.

In his analysis, Mares says “the development of Latin America’s shale gas potential faces significant challenges, and it is not clear that the region will address them successfully.” He warns that Mexico, Argentina and Brazil may face serious problems over shale gas exploitation.