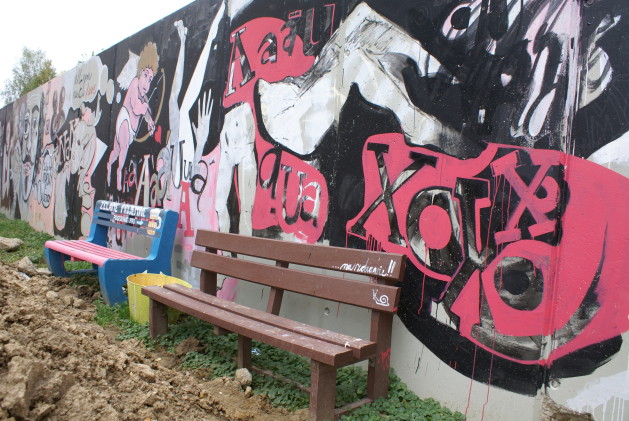 This wall in Michalovce town in Eastern Slovakia was erected after complaints that Roma were walking through a non-Roma estate to the town centre. Credit: Ingrid Hruba/IPS.

KOSICE, Slovakia, Aug 24 2013 (IPS) - The European Commission (EC) has demanded that Slovakia’s second city, Kosice, tear down a wall put up to segregate Roma – the 14th such wall in the country and the eighth built in the last four years.

The 30 metre-long and two-metre high wall went up in Kosice, currently the European Capital of Culture, in June after locals in part of the city complained about repeated car thefts and anti-social behaviour from Roma living on nearby estates.

The EC has written to city officials telling them that the wall is a breach of the human rights values the EC holds.

Authorities in the Kosice-Zapad area of the city where the wall has been put up claim that it is not anti-Roma and has instead been built solely to provide secure parking space.

“Walls such as these in Slovakia or anywhere else are not only physical barriers but also psychological dividing lines."

But activists say it is a symbol of how entrenched the exclusion of the minority Roma population is in the country and how desperate the need is for new policies on social inclusion.

Executive director of the European Roma Rights Centre (ERRC) Dezideriu Gergely told IPS: “Walls such as these in Slovakia or anywhere else are not only physical barriers but also psychological dividing lines, an illusory policy of protecting ‘us’ from ‘them’ which hinders any possible social inclusion of Roma in their respective societies.

“There are 13 other walls in Slovakia. They should all be removed. Governments and local authorities must invest their time and energy into developing inclusive policies that work, and discourage segregation in every manner possible.”

The wall in Kosice is the latest in a number that have gone up in locations across Slovakia with large Roma communities. Some have been financed by private individuals and built on private property, but many are erected using public funds.

International rights groups have repeatedly criticised the walls and called for their removal. But successive governments have failed to act on the issue.

Critics say that while politicians publicly call for racial equality and minority rights to be upheld, in reality little concrete is done to address the issue of Roma segregation and the condition of the estimated 400,000 Roma across the country – almost a tenth of Slovakia’s population.

As in many other parts of Eastern Europe, Roma in Slovakia claim that they face systematic discrimination at all levels of society. Some schools in Slovakia and other countries in the region are de facto segregated, with Roma educated in separate classes.

Many Roma live in poverty, sometimes in what are effectively shanty towns or on estates such as those in Kosice near where the new wall was put up. Criminality among such poor communities is a problem.

But in places where walls have been put up there has been no effect on problems with crime, according to local media. Police say they cannot verify the claim though, as they do not keep records of ethnicity when recording crimes.

Activists say that the walls are not just ineffective but that they simply reinforce divisions in society and prejudices against the Roma.

Laco Oravec of the Bratislava-based anti-racism and human rights advocacy group the Milan Simecka Foundation, told IPS: “These walls are more a symbolic than physical barrier, they won’t stop anyone physically walking through a particular area.

“But their symbolism is of course very dangerous and negative for the inclusion of the minority population.”

He added that the only way to improve the situation would be to ensure more is done to include Roma in society. “The walls always go up in places where not much effort has been taken to deal with Roma inclusion. These walls are the consequences of not dealing with Roma inclusion and the expression of a deep frustration on both sides.”

Local authorities’ approach to inclusion is generally one of apathy or ignorance, rights groups argue, with a complete lack of any systematic approaches to minority inclusion.

The Kosice municipality was recently criticized by Slovakia’s human rights ombudsman for demolishing a Roma settlement in Kosice under environmental laws, classifying homes as communal waste.

Kosice is home to a notorious conurbation of housing estates where Roma live. Criminality and anti-social behaviour is commonplace and there are often conflicts between authorities and residents while water, gas and electricity supplies are regularly stopped over claims of non-payment and theft.

The continued absence of any long-term programmes is only deepening already existing divides and prejudices among the majority non-Roma population in areas where anti-social behaviour is a problem.

Oravec said: “It should not be forgotten that it is hard from the non-Roma majority as well. They often face criminal activity in situations like this and they are sometimes as big a victim as the Roma in this all.”

For the meantime, the fate of the wall in Kosice remains unclear. The local council which had the wall built has denied that it is anti-Roma. It says the wall is a response to years of complaints from local residents.

But the higher Kosice city authority has said the wall was built without planning permission and a decision will soon be made on whether it should be legalised or pulled down.

It has also invited European Commission (the executive arm of the European Union) representatives to come to the city to see at first hand the problems caused by parts of the local community behaving anti-socially.

Roma rights activists believe that even if the wall is removed, it is not just one wall which needs to come down.

The ERRC’s Gergely told IPS: “These walls are a reflection of the misconceptions about and negative views of Roma. They clearly spell out for Roma that they are unwanted in their own countries…these walls segregate the Roma from the rest of society.

“In the very near future, Europe will be celebrating the 24th anniversary of the fall of the Berlin Wall. This should be marked by taking down dividing walls in Europe that separate Roma from the rest of the community.”