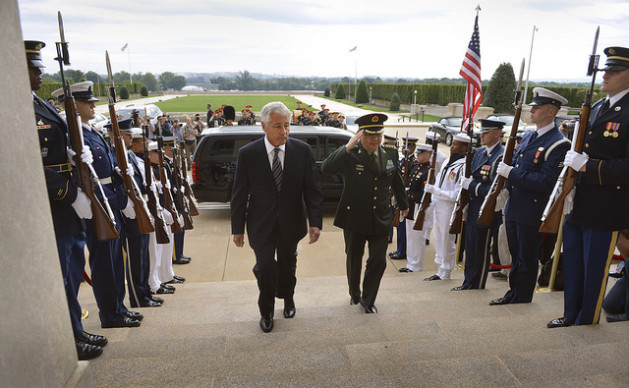 “We just finished a very productive meeting, where I restated that the United States is committed to building a positive and constructive relationship with China,” Hagel told reporters.

Hagel and Chang spoke of their countries’ commitment to build a stronger military-to-military relationship. They highlighted new ways to cooperate, such as in humanitarian aid and disaster relief operations, counter-piracy and counterterrorism initiatives, joint military exercises, and military exchange programmes.

The last time two of the world’s superpowers squared off was during the Cold War, a political, military, and ideological chess match between the U.S. and Soviet Union that resulted in the U.S.’s favour.

While falling short of an all-out “hot” war, the Cold War was marked instead by chilled communications, a series of proxy wars in the Third World, and an enduring nuclear arms race that built up enough firepower to wipe out human civilisation many times over.

Today, the U.S. faces a new adversary in a rising China. But are these two powers due for conflicts as well? Or is a new avenue of cooperation possible?

“China is a fundamentally different power than the Soviet Union was. While nominally Communist, the PRC (People’s Republic of China) is really much more of a classic emerging great power – it appears to want to profit from and integrate into the existing international system while eventually changing that system so that it caters more to China's own interests and values,” said Elbridge Colby, a research analyst at the Center for Naval Analyses’ Strategic Initiatives Group.

“The Soviet Union, on the other hand, was a fundamentally revolutionary and transformationalist power that wanted to upend and radically alter the international system to conform to its interests and dogmas,” Colby told IPS.

“While the Soviet Union was militantly against the capitalist/market world, China wants to be a part of that world, but reform it to its own interests. This makes the nature of China's rise much different,” said Colby.

“Tension and rivalry with the existing prime power – the United States – is almost inevitable, but conflict is not, because there are substantial areas of potential agreement and cooperation that can outweigh or override the potential areas of conflict,” he added.

Colby said that in the worst-case scenario, war between U.S. and China should be limited since “neither country desires to conquer or dominate the other”.

“This should allow very substantial areas for cooperation, even as tensions persist. For this reason, nuclear weapons will inevitably play an important role in mutual deterrence and, ideally, even stability. But their salience can be minimised if the two nations work towards cooperation as opposed to emphasising areas of tension,” argued Colby.

Asked about the U.S. “rebalance” or “pivot”, which involves increased U.S. military presence in the Asia-Pacific, Chang quoted his president, Xi Jinping: “The Pacific is wide enough to accommodate the two great countries, China and the United States. It’s always the Chinese position to welcome the U.S. to play a constructive role in the Asia-Pacific.”

Chang said that while the U.S. rebalancing strategy is a comprehensive one, he hopes it will not target China or stand against China’s affairs in the region.

Meanwhile, China is embroiled in territorial disputes with U.S. allies in the Asia-Pacific, namely the Philippines and Vietnam in the South China Sea, and Japan in the East China Sea.

Hagel said that while the U.S. takes no official position on sovereignty on these matters, the U.S. does have an interest for such disputes to be resolved “peacefully, without coercion”.

Hagel is slated to visit the Philippines at the end of August. As part of its rebalance, the U.S. is negotiating an agreement with Manila to allow U.S. troops greater access to Philippine military bases. Obtaining such access builds on former U.S. Secretary of Defence Donald Rumsfeld’s “lily pad” strategy, which involves lightweight U.S. forces stationed in bases spangled across the globe.

“China sees the U.S. as exploiting the opportunity created by the anxieties in the region to enhance its military presence and access arrangements,” said Bonnie Glaser, a senior adviser for Asia in the Freeman Chair in China Studies at the Centre for Strategic and International Studies (CSIS).

“The prospects of a U.S.-Philippines agreement on access arrangements has been discussed for some time, so the Chinese aren’t taken by surprise, though they are likely concerned about it,” Glaser told IPS.

China sees the U.S. rebalance as a strategy to counter China’s increasing global influence. In general, China’s rise in status has dotted media headlines in 2013: most recently, China passed the U.S. as the world’s largest trading nation. It is also set to overtake the U.S. as the world’s largest economy by 2016, according to the Organisation for Economic Co-operation and Development.

Analysts have already noted evidence of a new conventional arms race between the two nations. The U.S. and China have the world’s highest defence budgets, running up to 682 and 166 billion U.S. dollars in 2012, respectively, according to the Stockholm International Peace Research Institute (SIPRI).

China has invested in a range of anti-ship, land attack, and ballistic missiles, as well as counter-space weapons and military cyberspace “capabilities”, according to a 2013 U.S. Department of Defence (DOD) report.

Such actions are part of China’s anti-access and area denial, or “A2/AD”, missions. The U.S. is worried that China’s A2/AD weapons will restrict U.S. “freedom of action”, by limiting U.S. access to future “theatres of conflict”, as well as U.S. movements within that theatre.

To get around A2/AD, the U.S. unveiled a new war tactic known as AirSea Battle, which evolved from the AirLand Battle concept developed in the Cold War to counter any “Soviet-backed combined arms attack in Europe”. AirSea Battle’s aim “is to develop networked, integrated forces capable of attack-in-depth to disrupt, destroy and defeat adversary forces”, according to the DOD.

“Conventional arms competition between the U.S. and China is primarily over U.S. military access to the region,” said Glaser.

“China is developing (A2/AD) capabilities that seek to deny the U.S. such access in a crisis, and the U.S. is determined to sustain access and operational manoeuvrability,” she said.

One military niche that China has not rapidly developed is its nuclear arsenal, which contains a modest 250 nuclear warheads, compared to Russia’s 8,500 and the U.S.’ 7,700, according to SIPRI estimates.

While China is expected to streamline and modernise its nuclear force, specifically for second-strike or retaliatory purposes if another country instigates the first strike, analysts don’t see the arms race extending into the nuclear realm.

“Right now, I don’t see a high probability of China dramatically increasing the size of its nuclear forces,” said Elbridge Colby, co-chair of a working group that penned the report “Nuclear Weapons and U.S.-China Relations” published by CSIS.

“(China) does not appear to want to engage in a nuclear arms race with the U.S., both because that would likely spur countervailing responses by the U.S. and other countries in the region, and because it views too much expenditure on nuclear arms as wasteful,” Colby told IPS.

Asked how China is responding to AirSea Battle, John Chan, a China analyst at the World Socialist Web Site, told IPS that China is expanding its A2/AD capacities, as well as other military capabilities, including anti-surveillance, “in the hope that Beijing can seriously undermine the U.S. military in the event of war”.  Chan has long argued that the U.S. rebalance has ratcheted tensions in the Asia-Pacific.

Chan also interpreted an Aug. 2 piece by Chinese security expert Shen Dingli published in Chinese by Huan Qiu as something that calls into question China’s longstanding “no first use” nuclear policy. China is currently the only one of five U.N. Security Council permanent members with a “no first use” policy – which restricts China’s use of nuclear weapons only for deterrence and retaliation after suffering a nuclear strike.

However, asked via email if the U.S. rebalance to the Asia-Pacific should or will lead China to re-examine its “no first-use” policy, Shen, the vice dean of the Institute of International Affairs at Fudan University, told IPS: “Not clear, probably not.”