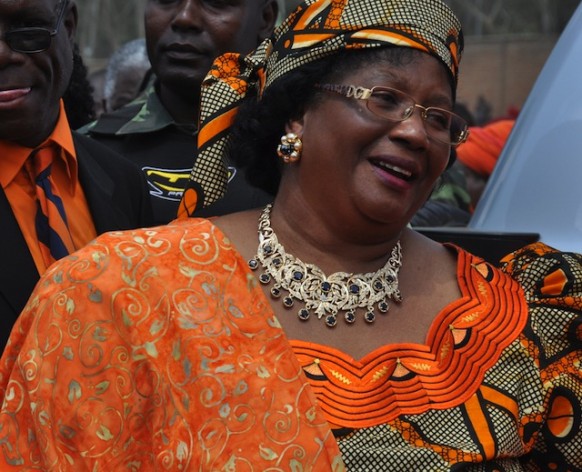 Malawi’s President Joyce Banda says women must be empowered and have to be actively involved in all decisions related to their health and well being. Credit: Katie C. Lin/IPS

LILONGWE, Aug 3 2013 (IPS) - Malawi’s President Joyce Banda knows a thing or two about women’s empowerment. After all she is the first female southern African head of state.

But she has not had it easy. Banda had a tough job fixing a sputtering economy after taking over from her predecessor Bingu wa Mutharika who died in office on Apr. 5, 2012. In 2011 the country witnessed nationwide protests against Mutharika and the failing economy. The United Kingdom, Malawi’s largest donor, had suspended 550 million dollars in aid after Mutharika expelled its ambassador for calling him an autocrat.

But she did succeed. Since taking office she has implemented of a number of austerity measures, which included selling the country’s presidential jet for 15 million dollars and taking a 30 percent cut in her salary. She also embarked on a range of reforms that not everyone has agreed with. The most controversial has been cultivating closer ties with international financial institutions like the International Monetary Fund, which is known for its heavy-handed austerity plans.

But in June, the World Bank said the country’s economy was recovering, with manufacturing expected to grow six percent and agriculture 5.7 percent.

In September 2012, the International Bar Association’s Human Rights Institute reported that since Mutharika’s increasingly autocratic rule ended, respect for democracy and human rights has returned to the country under Banda’s presidency.

In an exclusive interview with IPS, Banda said that women’s empowerment remained high on her agenda.

“The message I am trying to send is ‘Nothing for us without us’ – nothing for women without their involvement and inclusion. We need to make deliberate efforts and policies that will aim at eliminating the structural barriers posed by poverty and gender inequality in economic empowerment of women because such efforts will have long-lasting improvements on the welfare of a woman,” Banda told IPS.

In June, Banda appointed Anastasia Msosa the country’s first female chief justice. Msosa is just one of a number of women who have been appointed to high-level positions by Banda. In March, she appointed Hawa Ndilowe the first ever female head of the public service. Banda noted that even after women’s active participation in the fight for independence in the 1960s and their involvement in liberation movements in Africa, “women did not get prominent decision-making positions to correspond to their inputs in the struggles.”

Q: Many scholars and activists say that there is a direct link between gender equality, good governance and women’s empowerment and sustainable development. Do you agree with that?

A: Gender equality unlocks the potential of women and men to allow space for each other. And women’s empowerment proactively enhances the capacity of women to participate in decision making and in matters that affect them.

Q: Since you came to power in April 2012, you have appointed a number of women in very influential positions like chief justice and head of the public service. You have also appointed more women to your cabinet. What is your agenda?

A: It is important that women’s needs, aspirations and realities become central drivers of policies and programmes to increase maternal health care access and utilisation. Women must be empowered and have to be actively involved in all decisions related to their health and well being. As I have said many times before in different forums, we cannot talk about empowering a particular group without involving the group itself. No decisions should be made about women without women’s involvement.

Q: Before you joined politics, you formed the National Association for Business Women, an organisation that lends start-up cash to small-scale business women. You also successfully set up a school to help educate girls. Why are you so passionate about this?

A: Women constitute the majority of our population in Africa. Therefore, when we talk about poverty, suffering and underdevelopment, we are talking mostly of women. That’s why I believe that the promotion of gender equality, women’s empowerment, improvement of maternal health and achieving education for the girl child is a transformational strategy to achieving development.

Q: Women’s subordinate position in most African societies restricts the ability for them to take control of their lives to combat HIV/AIDS, leave a high-risk relationship or have adequate access to quality health care and education. What is your take on this?

A: In Malawi women and girls between the ages of 15 and 30 experience very high rates of HIV/AIDS infection. The infection rate of women/girls is six times higher than that of men/boys in the same group and the reason is because of the low socio-economic status of women in addition to various cultural practices that prevent women from negotiating safer sex.

Q: So what needs to be done to change this?

A: We need laws that protect women and my government has managed to push through the Gender Equality Bill and it has been passed by parliament. We also need deliberate policies to push capable women into decision-making positions in every sector so they lead and help empower fellow women.

Q: Finally, what are your last thoughts on empowering women?

A: In most African countries, women have over time faced a variety of legal, economic and social challenges. These disadvantages placed women and girls at the margins of society. In most homes, girls lack opportunity to access education. It is typical that in most African families when resources are low they prioritise boys’ education over girls’.

Sex-stereotyping on the part of parents, educators, religion, the media and society at large encouraged the practice that certain jobs are exclusively for men, and as a result the majority of women remained in the ‘feminised’ jobs. In some African societies, customary laws regarded adult women as minors and these women in most instances did not enjoy property and inheritance rights.

This increased their dependence on men. Treatment of women as minors manifested in formal provisions barring women from opening their own bank accounts and apply for credit in their own right, for instance. Women have not enjoyed access to factors of production like their male counterparts.

However, I am pleased that African women have not just sat back, and accepted being pushed into the margins of society. African women have risen up to claim their rightful place in society and are driving the agenda for their empowerment.