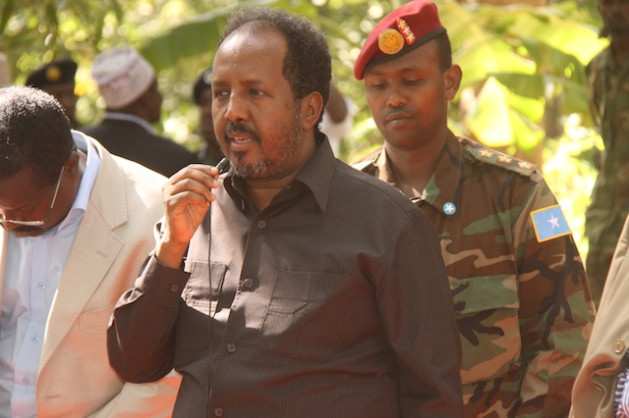 MOGADISHU/NAIROBI, Sep 12 2013 (IPS) - After his first year as president of the world’s most dangerous and failed state, Hassan Sheikh Mohamud is still grappling with limited financial resources, corruption, a lack of service delivery, and the ongoing assassinations of government officials, including attempts on his own life.

The Somali president, who on Tuesday Sep. 10 celebrates 365 days of being voted into office by legislators, has had a difficult first year of his four-year term.

Analysts say that not only has Mohamud had to contend with the Islamist extremist group Al-Shabaab, which has waged a number of recent terrorist attacks on the capital Mogadishu despite being ousted from key cities across this Horn of African nation, and an increasing number breakaway states, he also faces a growing and deep disillusionment among Somalis.

“The Six Pillar Policy has been ambitious, but public service delivery is practically non-existent,” Aynte told IPS in Nairobi.

“It’s therefore no surprise that no noticeable progress has been made towards achieving any of it.”

However, he added: “The government seems to be taking important steps to defuse tensions, address shortcomings and widen consultations with the public. The ‘Vision 2016’ conference was a positive step.”

Somalis have lived through almost 20 years of war, poverty and displacement following the ouster of dictator and former president Mohamed Siad Barre in 1991. The country had no central government until 2000, after which a series of interim governments were elected.

There are also few essential services or healthcare facilities in the country, with most being provided by NGOs. For over 20 years Médecins Sans Frontières, or Doctors Without Borders, was one of the few providers of essential healthcare in Somalia. But in August it pulled out of the country after the murder and harassment of their staff made it increasingly impossible for the organisation to operate.

But Mohamud’s aides are quick to defend the former university professor and civil society activist, who survived an assassination attempt while travelling to the southern Somali town of Merca on Sep. 3. Presidential spokesman Abdirahman Omar Osman told IPS in Mogadishu that while the country had critical financial constraints, progress had been made in a number of areas.

“The government, for the first time, engages with communities on key decision-making process. We hold national reconciliation conferences on judicial reform on political vision, on education and how to tackle religious extremisim.”

He said that the government’s record speaks for itself.

“We have maintained security in all territories capture from Al-Shabaab, we are stabilising all regions in Somalia that we ousted Al-Shabaab [from].

“We pay our soldiers regularly, we pay our MPs and civil servants regularly. We have implemented public financial management that is sound. The parliament functions properly and ratified many key legislations,” Osman said.

He said that for the first time in Somalia the government “was able to reach most regions and districts [and] this was a historic achievement.” He added that Mohamud was chosen by Time Magazine as one of the world’s 100 key influential leaders and that the government had gained the recognition of its international partners including the United States, United Kingdom, and Japan, among others.

He added that “the government doesn’t have enough money to do everything.”

“The government’s monthly revenue is roughly three million dollars from [income from] Mogadishu’s seaport and the airport, and yet the budget we need to execute our daily activities is at least 20 million dollars each month,” he said.

However, Mogadishu’s seaport deputy director Abdiqani Osman Kabareto told local Radio Ergo in August that the seaport generates between four and five million dollars a month. However, Mogadishu’s Airport officials were not available to comment on their monthly revenue.

“Imagine a government with such limitations of budget trying to rebuild and create its institutions from scratch. That is where the problem lies. It’s financial shortage,” Osman said.

Mohamed Ali, a university graduate of Simad University, which Mohamud helped found, told IPS that although he supported Mohamud’s election, he feels that there is not much to celebrate a year later.

“I felt he was one of us and the only one who understood our needs, our suffering, our importance more than any,” said Ali.

Ali, who graduated three years ago with a bachelor’s degree in business administration, is still struggling to find a job, and he has given up hope that the president will deliver on his promises of job creation.

The United Nations Development Programme estimates that 67 percent of the youth in Somalia are unemployed. More than half of Somalia’s 10.7 million people are under the age of 30.

“He became like any other politician who delivers nothing of what they promised after getting into office. I saw him as the candidate of hope and change, but the only thing that has changed so far is the name of the government from the Transitional Federal Government to the Federal Government of Somalia.”

Professor of economics and vice president of the Horn of Africa University in Mogadishu, Yahye Sheik Amir, said limited financial resources were not Mohamud’s only problem. He said that the endemic corruption within governmental institutions undermined the possibility of any economic recovery and development here.

“The government also lacks strategies that can help generate money beyond the airport and seaport in Mogadishu,” Amir told IPS.

“The government could collect millions of dollars through taxation and business licence and registration fees for companies working in the country, only if it expands its administration beyond the capital and also develops transparent and accountable institutions for managing the revenue,” he noted.

Aynte urged the government to declare war on corrupt syndicates and to exercise the utmost transparency. He said that improved security was needed in order to generate additional revenue.

The government recently began collecting taxes in some areas of the capital city but a number of its tax collectors have been attacked. At least five taxmen have been killed this year, while more than 10 were gunned down last year, according to sources in Mogadishu’s local administration.

Osman promised that a year from now, Al-Shabaab will be defeated and security and stability will return to the country, and that hopefully the government will be capable of providing public services.

“Rome wasn’t built in a day,” Osman said, adding that the Somali government was happy with its progress to date.

HIPS’s Aynte was hopeful about the year ahead. “I’m optimistic that by [the end of next year] there will be enough impetus to move the country to the right direction, even if it is slow.”

* The story that originally moved on Sep. 10, incorrectly quoted Abdi Aynte and Abdirahman Omar Osman as saying that Somali President Hassan Sheikh Mohamud failed to make progress in his first year in power. This story contains further comment from Osman about the government’s successes in its first year.