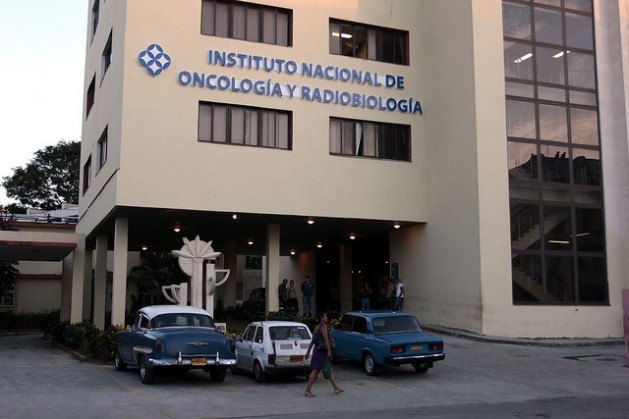 A number of hospitals and clinics in Cuba have been remodelled. Credits: Jorge Luis Baños/IPS

HAVANA, Sep 7 2013 (IPS) - One challenge faced by the Cuban government, and a high priority for citizens, is improving the efficiency and sustainability of public health services, a constitutional right that the state is supposed to ensure for all.

The quality of healthcare services was a target of criticism during mass debates that were promoted by President Raúl Castro in a key Jul. 26, 2007 speech.

Many suggestions for improving the public health system also emerged from discussions on the draft social and economic policy guidelines that were later approved for the current process of “updating” the country’s development model.

The evident deterioration of hospitals, inadequate professional care, and a shortage of medical personnel were among the complaints most frequently expressed at that time.

“Since the early 2000s, the public has been dissatisfied with a large number of things,” Emilio Delgado, head of the Primary Health Care Department, admitted to IPS in an interview.

The official said that given the need to meet international medical “commitments,” the healthcare system was reorganised, resulting in a reduction of family doctor’s offices, which are the basic foundation of primary health care in Cuba.

Remedying that situation involved a restructuring that began in 2010 as part of a number of changes aimed at modernising Cuba’s socioeconomic model and building what the government describes as “prosperous and sustainable socialism.”

Delgado said the cuts have continued, to 486,000 health workers in July. These staff reductions involve offering other jobs to redundant workers described euphemistically in Cuba as “available”.

As a “very important” result of the ongoing changes, 11,550 family doctor’s offices are now operating nationwide, “almost double” the number before 2010, Delgado said. This system brings doctors closer to Cuban families and prevents unnecessary trips to the hospital, among other benefits.

Measures were also taken to rationally employ high technology and other resources, and investments continue to be made to rebuild hospitals.

“My husband had an emergency operation last week and I have no complaints. Even the hospital food has really improved,” Consuelo Aguilar, a teacher, told IPS.

Delgado said: “These changes had three main goals: to be more efficient and sustainable, that is, to provide the same services but with better quality and at a lower cost; to maintain our health indicators; and to achieve greater satisfaction among the population.”

He estimated that since 2010, more than two million pesos have been saved in healthcare spending.

According to other official sources, the healthcare system had grown in recent years, both in the number of workers and in the acquisition of costlier equipment. This translated into higher spending, which rose from 5.5 percent of GDP in 2004 to 9.6 percent in 2009.

After reorganising its healthcare facilities, Cuba now has 152 hospitals with a total of 40,318 beds; one doctor for every 133 inhabitants; one dentist for every 774; and one nurse for every 117. Life expectancy at birth is 77.9 years, and the infant mortality rate is 4.3 per 1,000 live births.

In parallel, health authorities hope the system will begin generating revenue of its own by marketing services to foreigners both inside and outside of Cuba, including teaching services.

“A large number of doctors from other countries want to and can self-finance training in their specialties here,” Delgado said.

Along with the challenge of sustainability, Cuba’s health system must also respond to the problems presented by the low birth rate, which now stands at 11.3 per 1,000; an aging population; and associated problems, such as cancer, the leading cause of death.

“We are preparing for all of these things, and in some cases, we have already taken precautions,” Delgado said.

Measures are being studied for encouraging women to have more children and to go in for more gynecological checkups. Likewise, treatment for female and male infertility is being expanded in order to offer “the possibility of pregnancy for thousands of couples who can’t have children,” he said.

Cancer, meanwhile, is a disease that requires specialised treatment and medicine and poses a different set of challenges, for which Cuba is preparing with the introduction of new diagnostic technologies and treatments. “There is a whole investment process underway in that sense,” Delgado said.

In his opinion, the greatest challenge in terms of healthcare services that are provided to all of Cuba’s citizens free of cost is achieving greater satisfaction among the population. “If people are dissatisfied, we have to keep finding out why,” he said. Hygiene and epidemiology are other areas that require more attention, he added.