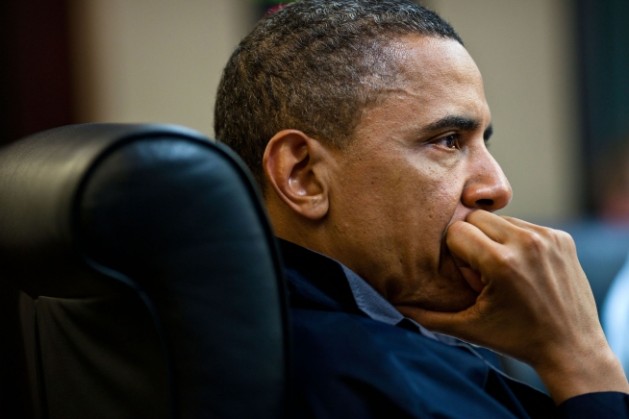 Some analysts suggest that Obama’s failure to line up support from more G20 leaders suggests that the U.S.-created global order is no longer sustainable. Credit: Official White House Photo by Pete Souza

WASHINGTON, Sep 6 2013 (IPS) - With a week of intense lobbying behind him, U.S. President Barack Obama looks increasingly beleaguered – both at home and abroad – in his effort to rally support for a military strike against Syria to punish its government for its alleged Aug. 21 chemical-weapons attack outside Damascus.

At home, most political observers say Obama faces a particularly difficult task in bringing a majority of the Republican-led House of Representatives, which begins debating his proposed Authorisation for the Use of Military Force (AUMF) next week on return from its August recess, over to his side.

“The lack of consensus within G20 is confirmation of what we already knew, which is that there is limited support for military action in Syria within the international community." -- Charles Kupchan of the Council on Foreign Relations

Congressional offices, even those whose bosses favour Obama’s position, are reporting overwhelming opposition in telephone calls and emails from their constituents, while public meetings held by lawmakers in their home districts have been dominated by anti-intervention forces from both the right and the left.

And polls released over the past week suggest that the administration has made little headway in moving public opinion its way.

A new Gallup poll taken at mid-week and released Friday found that support for U.S. military action “to reduce Syria’s ability to use chemical weapons” – 36 percent – was the lowest on the eve of any military intervention Washington has undertaken in the last 20 years. Fifty-one percent of respondents opposed a strike.

In a reflection of White House concern over opposition to military action, Obama himself announced Friday that he will address the nation about his intentions Tuesday. At a press conference at the Group of 20 (G20) meeting in St. Petersburg, Russia, he acknowledged that getting both house of Congress to approve an authorisation was “going to be a heavy lift”.

He spoke just after his deputy national security adviser, Tony Blinken, told National Public Radio (NPR) that, even though Obama retained the constitutional authority to strike Syria without Congressional authorisation, “it’s neither his desire nor intention to use that authority absent Congress backing him.”

Meanwhile, on the international front, Obama also appeared to be faring poorly in his bid to gain support for military action.

In St. Petersburg, The White House released a “joint statement” signed by the leaders of only 10 members, including the U.S., of the G20 plus Spain voicing “support efforts undertaken by the United States and other countries to reinforce the prohibition on the use of chemical weapons” and calling for “those who perpetrated these crimes (to be) held accountable.” The statement stopped short, however, of endorsing military action.

The signatories included the leaders of Australia, Britain, Canada, France, Italy, Japan, South Korea, Saudi Arabia, Turkey, as well as the U.S. Absent from the list, however, were all members of the BRICS bloc – Brazil, Russia, India, China, and South Africa – as well as Argentina, Indonesia, Mexico, and Germany.

The European Union (EU), a G20 member in its own right, also did not sign due to a lack of consensus among its membership.

Independent observers described the statement as a serious setback not only to Washington’s efforts to rally international support.

“It seems to have been a remarkable investment of American diplomatic energy not to have achieved the support of even a majority of the G20, and they tried to give the appearance of half plus one through sleight of hand,” noted Daniel Levy, the director of the Middle East and North Africa Programme at the London-based European Council on Foreign Relations (ECFR), who pointed to larger problems caused by the way the administration has acted over the Syria issue.

“Look at the institutions they’ve weakened in this process: the U.N. Security Council itself; the European Union by implicitly underlining its failure to gain consensus; the Arab League where the three most populous Arab states – Egypt, Iraq and Algeria – have all come out against military action; and even the G20 – all in order to achieve a statement that is far from an unequivocal endorsement of American military action,” he told IPS.

Charles Kupchan, a senior fellow at the Council on Foreign Relations (CFR), also suggested that the administration’s latest diplomatic move underscored its weakness on the issue.

“The lack of consensus within G20 is confirmation of what we already knew, which is that there is limited support for military action in Syria within the international community,” he said.

Back at home, advocates of military action, the most vocal of whom are pro-Israel activists and organisations worried that Congress’ failure to back up Obama’s threats against Syria will embolden Iran and its regional allies, are increasingly making the argument that both the president’s and Washington’s international credibility is at stake.

“This is not longer just about the conflict in Syria or even the Middle East,” wrote former Sens. Joe Lieberman and Jon Kyl, co-chairmen of the American Internationalism Project of the American Enterprise Institute (AEI), a neo-conservative think tank that played a leading role in championing the 2003 invasion of Iraq.

“It is about American credibility. Are we a country that our friends can trust and our enemies fear? Or are we perceived as a divided and dysfunctional superpower in retreat, whose words and warnings are no longer meaningful?” they asked in an op-ed entitled “Inaction on Syria Threatens U.S. Security” published by the Wall Street Journal Friday.

Failure to authorise a strike will be a “green light” for Iran to “speed toward nuclear weapons” and “confirm the worst fears of our ally, Israel, and moderate Arab states like Jordan that the U.S. cannot be relied upon to stand by its commitments. This will dramatically raise the risks of a regional war that could upend the global economy,” they stressed.

But others have argued that the credibility argument is overdrawn in this case.

“We heard this argument many, many times before, and always when the objective case for war was weak,” according to Stephen Walt, a prominent international relations expert at Harvard University. “To refrain from using force when vital interests are not at stake and when bombing could make things worse is not weakness; it is good sense.

“The United States has fought five wars since the Cold War ended and is using drones and special forces in several countries already,” he told IPS. “Nobody is going to question U.S. credibility when its interests are genuinely engaged and it has a clear objective in mind.”

Some liberal interventionists, notably Secretary of State John Kerry in his various public remarks, have also stressed the credibility argument, arguing that Washington’s failure to act could have profound implications for world order.

“For better or worse…” William Galston of the Brookings Institution argued in the Journal earlier this week, “the United States is the guarantor of the global order, which we took the lead in creating.

“Mr. Obama will need to convey this idea to the American people …from the Oval office,” he wrote.  “He must be prepared to go all-in to win what is shaping up as a tough fight on Capitol Hill. One thing is clear: A loss would shatter his presidency, and a lot more.”

But Kupchan said Obama’s failure to line up support from more G20 leaders suggested that the U.S.-created global order was no longer sustainable in any case.

“It’s clear confirmation of the degree to which there is a fundamental difference in geopolitical perspective between developed and emerging powers,” he told IPS.

“That the BRICS countries voted as a bloc is a sign of how difficult it’s going to be to fashion international consensus as global power continues to diffuse.”