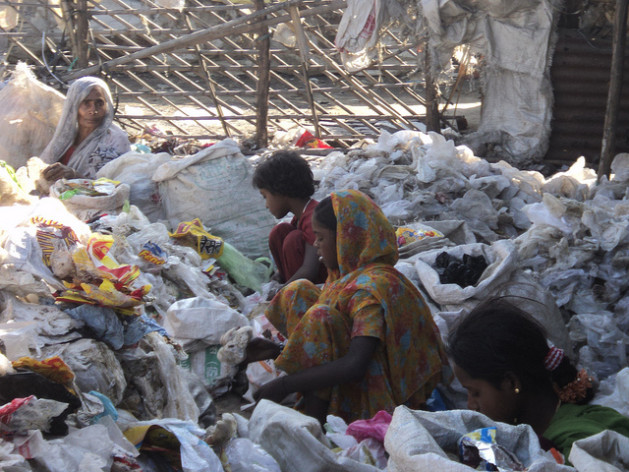 UNITED NATIONS, Sep 25 2013 (IPS) - As world leaders from 193 countries evaluate the successes and failures of the Millennium Development Goals (MDGs) during high-level meetings and special events here, the United Nations claims that extreme poverty worldwide has been cut in half.

The number of people living on less than 1.25 dollars a day fell from 47 percent in 1990 to 22 percent in 2010, five years ahead of the targeted 2015 deadline, according to the latest figures released Wednesday by the world body.

"The roots of global crisis are the incredible concentrations of wealth and the failure of that money to trickle down." -- Sameer Dossani of ActionAid

But much of the reduction in poverty – amounting to about 700 million people leaving the ranks of the indigent – has taken place in countries such as India, China and Brazil, which have huge populations. There are still 1.2 billion people still living in extreme poverty in most of the world’s poorer nations in Africa, Asia and Latin America and the Caribbean.

But poverty alleviation has also resulted in the rise of a new middle class.

On the negative side, this has triggered mass social protests in Brazil, China, India, Turkey, Egypt and Tunisia. And this may be an unintended consequence of poverty eradication.

Perhaps more importantly, poverty alleviation even in these countries may hit a dead end soon because of the widespread financial crisis worldwide – as currencies collapse and exports shrink.

“The reduction of poverty coincided with exceptional global factors in the first decade of this century that is coming to an end,” he noted.

In a formal declaration - called an "outcome document" - released Wednesday, world leaders meeting here said with less than 850 days remaining for the achievement of the MDGs, "We renew our commitment to the Goals and resolve to intensify all efforts for their achievement by 2015."

These goals include the eradication of extreme poverty and hunger, the achievement of universal primary education, the promotion of gender equality, the reduction of child mortality, the improvement of maternal health, the elimination of HIV/Aids, malaria and other diseases and the protection of the global environment.

The heads of state and heads of government said they are concerned at the unevenness and gaps in achievement and at the immense challenges that remain.

"We are resolved that the post-2015 development agenda should reinforce the international community's commitment to poverty eradication and sustainable development," the document stated.

The world leaders also decided to launch a process of intergovernmental negotiations at the beginning of the 69th session of the General Assembly next September "which will lead to the adoption of the post-2015 development agenda."

The credit boom in developed countries fuelled trade and economic growth – a rise in Gross National Product (GNP) – in developing countries, including commodity exports, he said. These countries also recovered from the financial crisis of 2008 to 2009 because of the reflationary policies of rich countries.

“But the Northern economies are in trouble, as they have changed to austerity policies and the U.S. easy money policy will have to taper down sooner or later,” said Khor, a former director of the Penang-based Third World Network.

In the next few years, Khor said, the slowdown of growth and possible recession in some countries and lower commodity prices are likely to impact on jobs and income, while poverty could rise again.

“It’s happening in Greece already and could happen in some developing countries,” he said.

Winnie Byanyima, executive director of Oxfam International, told IPS the MDGs have been an important force for development progress over the last 13 years.

“So many people lifted out of extreme poverty in such a short time is an achievement to celebrate,” she said.

Yet globally, more than a billion people still live on less than 1.25 dollar a day.

She said progress has been slow or non-existent where there has been protracted conflict, or where growth has been highly inequitable. “Global poverty is declining but in country after country, inequality is on the increase,” Byanyima said.

Billions of people are being left behind by economic growth, she noted.

There is an emerging consensus that high levels of inequality are not just morally objectionable, but they are damaging for social stability and to growth itself.

“These challenges must be met head-on,” she added.

Without targeted efforts to reduce gaps between rich and poor, the next set of global development goals will likely be unachievable.

“A focus on reducing inequality was a major omission in the original MDGs. Without it, the next set of global development goals is almost certain to fail,” she warned.

A stand-alone goal to tackle inequality must be included in a future framework for global development, she said.

“The roots of global crisis are the incredible concentrations of wealth and the failure of that money to trickle down,” he said.

One way to address the issue of global inequalities, he pointed out, is through reform of the international tax system. “At the moment we estimate that as much as 300 billion dollars in tax revenue is lost to development through a combination of corporate tax incentives and corporate tax dodging.”

At the country level, he said, countries can move away from the liberalisation policies that the International Monetary Fund (IMF) and other institutions promoted in order to seek some protection.

The debate so far has skirted these fundamental issues. A genuine development framework would have tax and international monetary system reform at the top of the agenda, he said, adding that “these issues can’t be brushed under the carpet.”