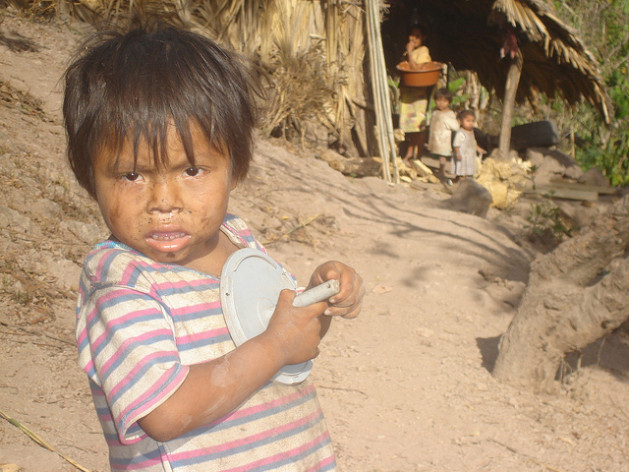 UNITED NATIONS, Sep 25 2013 (IPS) - Reducing the proportion of undernourished people by half until 2015 was one of the Millennium Development Goals that the international community set in 2000. It will not be reached: At least 870 million people worldwide – and one child in five – still go hungry; this in a world where we already produce enough food today to feed nine billion people in 2050.

Further progress towards reaching this goal can be made in the remaining months, but we must ask ourselves what comes afterwards. The debate on the so-called Sustainable Development Goals (SDGs), to be reached by 2030, has already begun. On Wednesday, Sep. 25, heads of states and governments will meet in New York.

"The aim here is not the maximum conceivable yield but a sustainable and environmentally supportable yield."

Defeating hunger remains a priority. This is not simply a matter of providing everyone with enough food; crucial for the future of all human beings is how this should happen.

“Food security and nutrition for all through sustainable agriculture and food systems” must be set as one of the fundamental goals of global development. It is therefore imperative for agricultural policy to change course, as requested in 2008 by IAASTD, the International Assessment of Agricultural Knowledge, Science and Technology for Development. The same message was reiterated in the Rio+20 Declaration “The Future We Want”.

Widely spread forms of industrial, conventional agriculture are not sustainable. With high-yielding varieties and a heavy reliance on fertilisers, water, pesticides, and energy, it has delivered impressive yield increases, but only by exhausting its own production base in the long run.

It not only depends on high levels of inputs, but also leaves behind degraded soils, polluted water, and depleted biodiversity. According to the often-cited IAASTD report, 1.9 billion hectares of land are already affected by degradation due to unsustainable use. This comes at an annual cost of around 40 billion dollars and negatively affects the livelihood of 1.5 billion people worldwide.

This form of food production must be replaced by sustainable forms of agriculture, which maintain and restore natural soil fertility, protect water sources and promote biodiversity. Sustainable agriculture has economic and social benefits while remaining within the natural boundaries of our planet.

The aim here is not the maximum conceivable yield but a sustainable and environmentally supportable yield. This is certainly enough to nourish the nine billion people who will inhabit the earth by mid-century.

According to the “Green Economy Report” published in 2012 by the United Nations Environment Programme (UNEP), food availability per capita could be increased through sustainable production methods by 14 percent, creating millions of new jobs in rural regions in the process, and thus alleviating poverty. At the same time, agriculture could reduce its ecological footprint.

The main players here are small-scale farmers. Worldwide, 70 percent of food production comes from small farms, which collectively use 40 percent of the world’s arable land. They would be able to nourish people in developing countries, but will have to be supported in this endeavour.

They need guarantees regarding the ownership and rights of use for their land, better access to education, information and markets, as well as fair prices for their products. Rural infrastructure and services are a key factor in this and must be promoted much more intensively by state and international authorities.

Above all, the position of women must be improved. Women play a key role in food production, but earn less and have fewer rights. According to the U.N. Food and Agriculture Organisation (FAO), equal access to education and agricultural resources in Africa would boost harvests by 20 to 30 percent.

A significant challenge that needs to be urgently addressed is food waste. Worldwide, a third of what is produced goes to waste. Developed countries have a particular responsibility to act: they throw away 222 million tonnes of food every year, which is approximately the annual harvest of sub-Saharan Africa.

Finally, a fairer trading environment is critical. The rules of agricultural trade will have to be adapted to take into account the needs of small-scale farmers. At present, this is not the case.

Developed countries need to reform their agricultural subsidies and trade policies. Government payments coupled to production, in addition to export subsidies, expose farmers in developing countries to unfair competition and can therefore impede their production. These subsidies must be converted to payments for ecosystem services and public goods.

Land grabbing, the acquisition of fertile land by financially strong investors over the interest of the local land users, must be stopped. Activities that exacerbate food price volatility, such as financial speculation on food commodity futures markets, must be reined in.

According to these models, a sustainable development goal should comprise the following elements:

1. End malnutrition and hunger in all of their forms, so that all people enjoy the right to adequate food at all times.

2. Ensure that all smallholders and rural communities, in particular women and disadvantaged groups, enjoy a decent livelihood and income, and secure their right to access productive resources, such as land and water, everywhere.

3. Achieve the transformation to sustainable, diverse and resilient agriculture and food systems that conserve natural resources and ecosystems. The loss of fertile land is not acceptable. Instead, land degradation must be minimised and inevitable degradation compensated through regeneration and restoration measures.

5. Establish inclusive, transparent, and equitable legislative and other decision-making processes on food, nutrition, and agriculture at all levels.

Olivier De Schutter is the United Nations Special Rapporteur on the right to food. Jochen Flasbarth is President of the Federal Environment Agency in Germany. Dr. Hans R. Herren is President of the Biovision Foundation in Zurich and the Millennium Institute in Washington.