NEW YORK, Sep 21 2013 (IPS) - Five years after the 2008 world financial crisis and two years after the Occupy movement it triggered, U.S. critics of the financial sector are coalescing around the idea of a Robin Hood Tax on financial transactions. 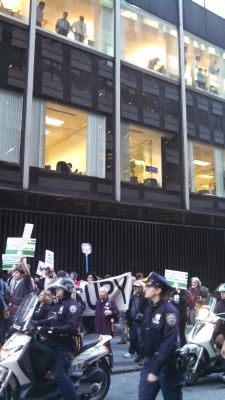 “The questions that Occupy raised are the right ones and it’s up to everyone else to come up with some answers,” said Robert Pollin, an economist at UMASS Amherst who works on financial transaction taxes (FTTs).

The idea, first floated by Nobel Prize-winning economist James Tobin in the early 1970s as a way to discourage overzealous currency trading, would, in its current iterations, levy a small duty on stocks, bonds and derivatives.

Though the debate over FTTs has long focused on curbing risky and unnecessary trading and “righting the market”, the Robin Hood movement attempts to shift it to one over human rights, fulfilling basic needs and not least a bit of payback for taxpayer bailouts of the financial sector.

For activists in the United States, the tax is part of what they hope will be a societal reorientation away from the privileging of an industry that has doubled its share of U.S. GDP since 1980 and drains other fields of the best and brightest.

FTTs exist in over 30 countries, many of them, like South Korea and Brazil, with some of fastest growth rates in the world.

“People don’t realise how tiny a tax we are talking about,” said Nicole Woo, director of domestic policy at the Centre for Economic and Policy Research (CEPR).

“There’s plenty of evidence out there that if revenues were to go to infrastructure spending, education and other public goods, it could increase GDP in the end and help increase employment,” Woo told IPS.

The Robin Hood Tax coalition, an umbrella group of sympathetic organisations, has put its weight behind a bill, “The Inclusive Prosperity Act,” introduced in the House of Representatives by Rep. Keith Ellison. The bill’s text is a strong critique of the financial sector and calls for the tax to pay for housing, healthcare and protecting the public sector and the environment.

The legislation would tax stock trades at 0.5 percent, bonds at .1 percent and derivatives at .005 percent.

The mix aims to “tax different markets equally”, Pollin told IPS, making it difficult for traders to flee one asset class for another. A tax in the U.S. would enjoy auto-enforcement on the part of market players because of the judicial security it provides.

A Legacy of Occupy

Back in New York, on the second anniversary of Occupy, supporters of the Robin Hood Tax marched from the United Nations, where the General Assembly is to open this week, through midtown and cement and metal valleys of finance, under the gaze of bankers pressed up against glass windows.

For Occupy, a movement that critics saw as lacking clear demands, the tax is a valuable policy objective. For the healthcare workers, environmentalists, AIDS activists, the unemployed, students, the indebted – the heterogeneous 99 percent - the tax is a rare unifying theme.

“This is a care plan for our society,” said Jean Ross of NNU. “We know where our money is, it’s tied up on Wall Street with the banks. We pay sales tax every day on things we buy. They don’t pay a dime.”

“If you want to use the American legal system, you will have to trade here,” says Pollin.

Larry Summers’ decision to remove himself from consideration as chairman of the Federal Reserve in the face of a promised uproar among liberal members of Congress has Robin Hood supporters optimistic.

Summers is seen by many on the left as a leading architect of the financial crisis after he pushed for financial deregulation and opposed transparency in the derivatives market while serving as treasury secretary during the Bill Clinton administration.

A European proposal, agreed to by 11 countries, however, suffered a legal setback this month when E.U. lawyers delivered a non-binding opinion that found a continent-wide FTT used jurisdictional powers within states illegally. The decision is one of many roadblocks that supporters can expect to encounter.

For nurses at a Sept. 17 Robin Hood event in New York City, the events in Europe were noise.

“We looked around the globe and found nurses have the same issues everywhere. Austerity measures are killing us,” said Jean Ross, co-president of National Nurses United (NNU), a union of over 180,000 registered nurses and co-founder of the Robin Hood Tax coalition.

The union sees a Robin Hood Tax paying for many of the medical services which have been cut since the economic crisis.

For years, High Frequency Trading (HFT) was the oft-cited boogeyman when it came to pushing for a Robin Hood Tax. Critics claim the billions of daily trades distorted markets and added to volatility.

Fears were realised on May 6, 2010 when the Dow Jones Industrial Average fell more than nine percent only to regain those losses in a matter of minutes. Resounding blame was laid on trading algorithms that exacerbated an initial drop in the futures market. By 2012, HFT were estimated to be executing 84 percent of all trades on U.S. exchanges.

But as more HFT players enter the fray, returns in the zero sum game of shaving fractions of pennies off trades have decreased.

Large firms like KCG – itself formed when GETCO merged with near bankrupt Knight Capital after a haywire algorithm cost the latter over 400 million dollars in one day – have seen their profits cut by over three quarters from the height of the HFT boom, a period that coincided with the first volatile spurts of the crisis in 2008. Many have gone out of business.

KCG declined to comment for this story, as did industry leader Citadel Group.

That high-frequency trading may eat itself up underscores its social uselessness, says Woo. HFT proponents cite the volume and liquidity it creates – if bid and ask prices are nearly even, retail investors and pensions should pay lower prices. This is misleading, Woo told IPS.

“The liquidity provided by these traders is a sort of phantom liquidity because as soon as things start going south the computer algorithms pull all their money out, the liquidity just dries up completely,” she said.

HFT profits, even at their height, were small compared to those of the entire financial sector. Pollin’s models, using parametres similar to those set forth in Ellison’s bill, predict a drop in trade volume of at least 50 percent, putting U.S. market volume and capitalisation proportionally on par with Great Britain, where a tax of .5 percent already exists on stocks.

“Financial trading is an undertaxed sector of our economy,” says Woo.

Many even on Wall Street, especially those whose profits are reliant on long-term trends, agree.

A lack of tax on commodity trading can in fact be a burden on the average consumer. Legislation will help consumers by discouraging speculation in commodity markets, says Kenneth Zinn, political director at NNU. “There’s a surcharge on gasoline that’s simply Wall Street speculation.”

After watching a bruising battle over healthcare that ended in the Affordable Care Act, the nurses union is gearing for a fight with the financial industry, another special interest group which will fight tooth and nail to protect its privileged place in the economic pecking order.