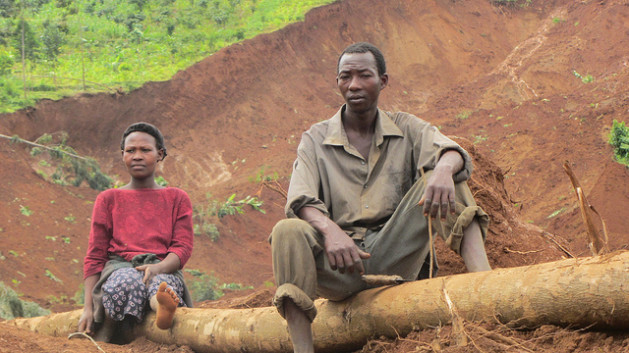 Michael Kusolo and his wife Mary lost all their four children in landslides that occurred in 2012 on the steep slopes of Mount Elgon in eastern Uganda’s Bududa District. Experts say that it is important that climate finance actually reaches Uganda’s communities and addresses the drivers of deforestation and degradation. Credit: Wambi Michael/IPS

KAMPALA , Sep 17 2013 (IPS) - As the ink dries on a 3.6 million dollar agreement between Uganda and the World Bank to support the country’s preparations for REDD, some analysts are pessimistic over the mechanism’s potential.

REDD (reducing emissions from deforestation and degradation) was formally agreed to at the United Nations Framework Convention on Climate Change (UNFCCC) negotiations in Bali, Indonesia in 2007. REDD is intended to reward the preservation of forests with carbon credits which can be sold to polluting companies in the North wishing to offset their harmful emissions. (REDD+, agreed later, extends the concept beyond forests and plantations to include agriculture.)

Uganda’s REDD negotiator, Xavier Mugumya, told IPS that in addition to the 3.6 million dollars from the World Bank, the Austrian government has offered a grant of 650,000 euros (865,000 dollars). But this is only a fraction of the total set out in the country’s Readiness Preparation Proposal (RPP).

Lauren Goers Williams is an associate in the Institutions and Governance Programme at the Washington-based World Resources Institute (WRI) who has been working with civil society partners in Cameroon for the past four years. She admitted to being somewhat of a “REDD skeptic”: “In some ways it’s a very simple idea: create an economic incentive to protect forests.”

“When it first came out, people acted like it was as simple as ‘Don’t cut down the trees, go out and measure some carbon and we’re done.’

“But in reality all of these countries have sort of already been struggling with how to manage their forests or figure out how to protect some of them while also striving for economic development,” she told IPS.

The analyst, who also has experience working with communities in Brazil and Indonesia, said most of her work involves trying to bring attention to governance and social issues in designing and implementing REDD programmes.

“Initially people weren’t talking about indigenous peoples. They weren’t talking about the rights of people who are living in a lot of these forests,” she said. “A lot of [forest dwellers] don’t have formal rights, but they’re still living in these areas, depending on these resources and many of them have customary claims to the land.”

David Mwayafu, from the NGO Uganda Coalition for Sustainable Development, has also been involved with implementing REDD projects. He said it was important that climate finance actually reaches communities and addresses the drivers of deforestation and degradation while allowing forest peoples to use forests sustainably.

But Ugandans are willing to conserve forests because they understand the importance of this, Mwayafu said.

“They have been doing this in the knowledge that the environment provides various ecosystem services such as timber, medicines, building materials, fuel wood [charcoal and fire wood], wind breaks and habitats for animals,” he said.

Goers Williams said one of the key messages to emerge from her experience in Cameroon was that policy makers must find ways to engage with local communities over REDD on local people’s own terms and in ways they understand.

“There can be a lot of fatigue and a lot of suspicion,” she said.

“So there’s definitely a real need for sensitivity and training to really understand where these groups are coming from and how their needs might be different from the needs of someone sitting in the capital, and really trying to work with them to sort that out.”

Mwayafu stressed the need for a two-way flow of information.

“If you implement a project in the community, sensitise them about the opportunities, challenges and importance of the project; provide an opportunity for them whereby they will be able to ask questions at the present and in future through a forum or dialogue, so that it’s not a one-way flow of information but an interactive approach,” he said.

“If we don’t address those livelihood questions, we’ll be working against the communities whose livelihood is dependent on the forest resources,” Mwayafu said. “There’s so many complex issues that come up, social and environmental ones in addition to economic ones.”

Goers Williams added: “I’m not sure we will ever see a REDD mechanism that is a huge international mechanism, run by the UNFCCC that easily compensates people for reducing their emissions.

“But I think there are a lot of little things that REDD can potentially do.”