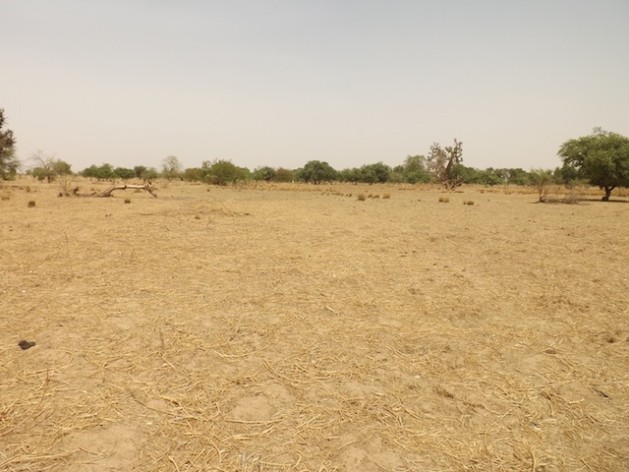 Land degradation in Burkina Faso. The country’s forests are under pressure from the expansion of farming areas. Courtesy: Burkina Faso Ministry of Environment and Sustainable Development

Burkina’s forests are under pressure from the expansion of farming areas and the over-exploitation of firewood and other non-timber forest products. These include harvesting of immature fruit, extensive livestock grazing, bush fires, and – in certain regions – by gold mining, according to Luc Conditamdé, head of Tree Aid, an NGO based in Burkina Faso and Niger.

“Planting (new trees) is no longer as important as properly managing state and communal forests. The government needs to get communities to take more responsibility as forest management is decentralised,” Conditamdé tells IPS.

Improving governance and management of forests is one of the key objectives of the FIP, a programme in the framework of the Climate Investment Funds (CIF) implemented by the world’s multilateral development banks.

Eight pilot countries were selected for the FIP, including the three African countries Burkina Faso, Ghana and the Democratic Republic of Congo. Each has been chosen for their potential to significantly reduce emissions from deforestation; conserve, manage or enhance carbon stocks; and incorporate climate finance into their policy frameworks and development activities.

A semi-arid country in the West African Sahel might seem a surprising choice, but Burkina Faso met many of the required criteria, says Mafalda Duarte, CIF coordinator and chief climate change specialist at the African Development Bank.

“Nevertheless, its semi-arid ecosystem makes it a good site to test the relevance and the operationalisation of REDD+ in that kind of ecosystems, which are widely spread worldwide,” she tells IPS. “In addition, Burkina has quite a long experience in participative management of forests.”

“The backbone of this programme is the involvement of local communities, who have to be regularly consulted,” Samuel Yéyé, the Burkina Faso co-ordinator for FIP/REDD tells IPS.

Burkina’s FIP programme will work in four regions of the country, each representing a different ecosystem. In addition to reducing emissions and enhancing stocks of carbon-storing forests, it is expected to have significant benefits in terms of poverty reduction, preservation of biodiversity and adaptation to climate change.

According to Yéyé, preliminary studies have already been carried out on the preservation of tree cover in these regions, their capacity to sequester carbon, and into ways to help generate income for locals through the use of non-wood products.

“Communities must make their contribution to forest conservation, and we must create new economic activities so that people do not one day revert to destroying the forests as a means of earning an income,” Yéyé emphasises.

Tree Aid’s Conditamdé says one of the keys to improved preservation and management of Burkina’s forests lies in transferring skills, responsibilities and resources to local authorities.

“Article 77 of the Code Général des Collectivités Territoriales dealing with transfer of responsibilities for the environment and management of natural resources has not been implemented. This causes problems in the management of forest resources at the level of the commune, and contributes to local authorities taking only limited responsibility in managing forests,” he tells IPS.

He also cites challenges linked to poor coordination between various bodies, as well as a lack clarity over the laws and regulations that formally govern land ownership. “These are often poorly understood by most people, for example the process of registration for forests. This situation complicates the handling of management of communal and community forests.”

But Conditamdé sees promising signs that the FIP programme will help.

“Putting transparent and equitable mechanisms in place to allow different actors to participate in formulating policy and implementing activities will help to address (these problems),” he says.

According to the implementation plan for Burkina’s FIP grant, the project will reduce CO2 emissions linked to deforestation and land degradation in Burkina Faso by around 30 to 70 million tonnes over a period of 10 years.

Rasmane Ouédraogo, coordinator for the national Poverty-Environment Initiative, says forests are critical to livelihoods in Burkina Faso, where 80 percent of the population depends on natural resources.

The authorities are expecting that the economic benefits of reduced soil degradation and better protection due to the FIP grant will be worth an estimated at 1.56 billion dollars over the project’s life.

“We had to convince the politicians, particularly those in charge of the economy and finance, that the environment contributes significantly to the national economy.  The contribution rose from three percent of GDP to more than 6.48 percent between 2002 and 2008,” Ouédraogo says.

An economic evaluation conducted in 2009 by the Ministry of Agriculture, Water and Fisheries showed that investments of this nature could lead to an increase in revenue for farmers ranging from 25 to 40 percent.