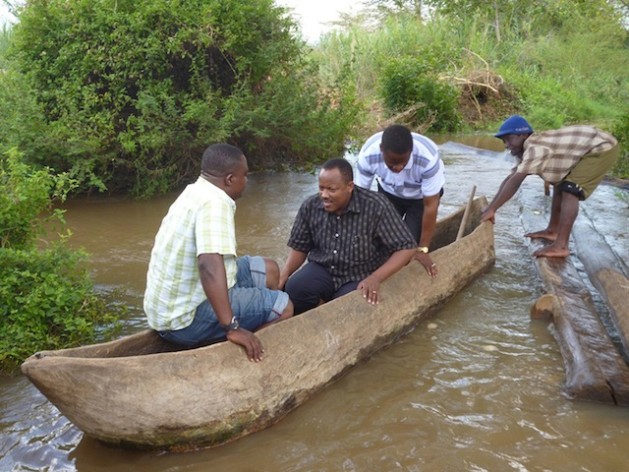 PANGANI, Tanzania, Oct 24 2013 (IPS) - As farmers and herders fight over dwindling water levels in the Pangani River Basin in northeastern Tanzania, a new dispute is emerging between farmers and the state-run power utility firm over this precious resource.

The Tanzania Electric Supply Company or TANESCO manages three hydropower plants located on the Pangani River near Muheza district, which are meant to provide 17 percent of the country’s electricity.

Subira Mgalu, the Muheza district commissioner, told IPS that conflict was rife between farmers and TANESCO, particularly in downstream areas where the hydropower plants are located. She said that the government was trying to “find a lasting solution” to the dispute.

“Insufficient water has been the main source of the clashes between irrigators and TANESCO, but we have tried to use wisdom to resolve them by ensuring that the available resources are shared equally between the parties,” Mgalu said without elaborating further. This East African nation’s water policy does not exclusively grant water rights to any agency and considers water a national resource that should be shared equally by all Tanzanians.

For the last four years, northeastern Tanzania has been experiencing a drought that locals say is the worst to have ever hit the region. Thousands of farmers and herders who earn a living here have been affected.

Jumanne Mujuni, a councilor from Mombo town, which is located a few kilometres from the Hale hydropower station in Muheza district, told IPS that the drought has pushed many to the brink as they compete with TANESCO for dwindling water supplies. He added that many locals are now embroiled in disputes with the state-run utility.

“All these problems that we face are rooted in the drought. There were hardly any [problems] when there was enough water in the river,” he said.

Hydropower from the Pangani River, which has a capacity to provide 17 percent or about 97 megawatts (MW) of the country’s electricity demand– enough to light 100,000 homes – is experiencing generation output of less than 30 percent due to insufficient water. This has caused a deficit on the national grid.

TANESCO has blamed the farmers for overusing water for irrigation without bearing in mind that the river’s flow must be maintained to enable the hydropower plants to operate.

“Those activities are straining water supply to the production facilities. We have often experienced inadequate water flow, which is below the minimum mark required to run the generating turbines effectively,” Danstan Mramba, the TANESCO manager who oversees the Pangani hydropower stations, told IPS.

Director of Water Resources Protection at the ministry of water, Naomi Lupimo, told IPS that the traditional furrow irrigation schemes used by small-scale farmers in the upper Pangani basin were the major source of the dispute as they used water inefficiently.

“These people have probably forgotten their traditional ways of conserving water sources, that’s why they use it haphazardly as if there is no tomorrow. They must be reminded that the water belongs to the state and everybody has the right to it.

“In the past, traditional furrow irrigation was concentrated in the highlands. But as more people keep coming into the basin, this system has spread to the lowlands, putting enormous pressure on water resources,” Lupimo said.

She explained that in a bid to protect water sources, the government would, among other things, start charging for the resource in some areas.

Smallholder farmers, however, view this move as a deliberate effort to safeguard TANESCO’s interests. Some told IPS that their share of the water was not adequate as TANESCO was “too selfish” to share the water with indigenous people.

“We have lived in this area all our life. How come today some people point an accusing finger blaming us of encroaching on water sources?” Mwamedi Jecha, a farmer at Hale village in Muheza district, told IPS.