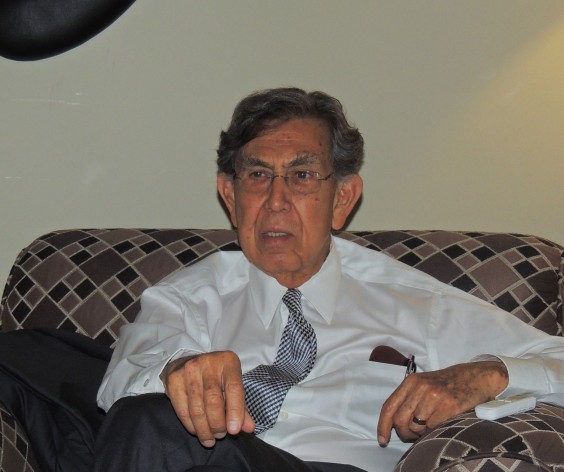 Mexico shouldn’t only be inserted in the North, under the current conditions of dependence, says Cuauhtémoc Cárdenas. Credit: Claudia Diez de Medina/IPS

ROME, Oct 15 2013 - Cuauhtémoc Cárdenas, known as the ‘moral leader’ of the Mexican left, said that his country and Central America “focus very much on the North” and should make a shift towards South America and its integration processes, in order to achieve less-dependent, alternative development conditions.

Cárdenas, the founder and leader of Mexico’s Party of the Democratic Revolution (PRD) and a former senator and Mexico City mayor, is the son of Lázaro Cárdenas, the revolutionary general and president of Mexico (1934-1940) who nationalised the oil industry in 1938.

In Rome on an official visit, Cárdenas discussed, in this exclusive interview with IPS, the risks posed by the Enrique Peña Nieto administration’s recent opening up of the oil industry to private capital.

Q: In the June 2012 elections, the PRD came in second, only a few points behind the Institutional Revolutionary Party (PRI), and it stands a chance of winning the next elections.

A: As long as the PRD fails to overcome internal problems and to change the way the party is run, I don’t see a possibility of it becoming – by itself or by attracting other sectors as allies – a political majority and reaching the national government.

I think it has to work more in the areas where it has voted poorly, opening the organisation up more and leaving aside sectarian practices. Otherwise, I don’t think the PRD will recover and stand a real chance at gaining power at a national level.

Q: A large majority of the governments in South America are leftist or centre-left, like the PRD. So if our party were elected to the government, we would have like-minded presidents practically from the Rio Grande to Tierra del Fuego, which would have significant international consequences, in relation, for example, to the North American Free Trade Agreement (NAFTA) between Mexico, the United States and Canada.

A: It seems to me that NAFTA has given whatever positive effects it could give, such as a major increase in exports, principally in areas in the north of the country. On the other hand, it has had a de-industrialising effect in many sectors: it dealt a strong blow to small and medium industry, as well as to agriculture.

Concrete efforts are necessary to recover the productivity of agriculture and small and medium industry, in terms of achieving better integration of productive chains.

The agreement would need to incorporate an annex to provide it with instruments like those created here in Europe when the integration process began, such as structural or compensation funds to reduce or eliminate asymmetries between the different national economies, as well as other means of reducing the disparity between countries, like the United States and Canada with respect to Mexico.

One very important aspect should be accepting labour mobility, because just as there is free circulation of goods between the three countries there should also be cross-border freedom of movement of workers and other people.

Q: Should Mexico have closer ties to South America?

A: Mexico has been very distant, in general terms, from South America. And from there we are seen as part of the North in many respects, and there is an impression that our country won’t integrate in the South American processes.

For Mexico to have other conditions of development, closer ties to those processes are indispensable, whether through the Community of Latin American and Caribbean States (CELAC), which still has to redefine itself, or the Union of South American Nations (UNASUR) – although in that case it only involves the 12 countries of South America.

We have to seek better integration with the south and also convince Central America to become closer to the South because it focuses so much on the North.

We should also participate more actively in Mercosur (Southern Common Market, made up of Argentina, Brazil, Paraguay, Uruguay and Venezuela), where Mexico is an observer, since we know that it is the big economic blocs that achieve the best insertion in the globalisation processes.

Mexico shouldn’t only be inserted in the North under the current conditions of dependence.

Q: What do you propose in relation to the United States and the problem of Mexican immigration?

A: We should get both the U.S. state and society to recognise the valuable contribution of immigrants, without whom the United States couldn’t function. Recognition means, perhaps not citizenship or the political rights enjoyed by all U.S. citizens, but labour and civil rights.

Q: President Peña Nieto recently proposed opening up the nationalised oil industry to private capital. Do you agree with this move?

A: The government proposes reforming articles 27 and 28 of the constitution, which would open up the possibility, even if it weren’t the government’s intention, of displacing Petróleos Mexicanos (Pemex) and the Federal Electricity Commission – the state’s main organs in the field of energy – which would lose their status of strategic sectors, as recognised by the constitution.

That would be grave because if those articles of the constitution were simply eliminated, electricity and oil would automatically be subject to NAFTA’s provisions, and we would, overnight, have competition free of controls in the oil industry.

As far as I see it, all countries, no matter how open they make those sectors, maintain controls, and in this case, from a legal point of view, the controls would be lost.

Q: Mexico City, once famous for its clear air, became at one time one of the cities with the worst smog in the world. Has the situation improved under the local PRD government?

A: It has improved. First, because there is better regulation and greater enforcement of environmental norms, and also because the motor vehicles in circulation – the biggest source of smog – have been modernised. And this is despite the difficult natural conditions that we have, because of the mountainous barrier to the south.

But there has been clear improvement in the air pollution in the valley of Mexico.