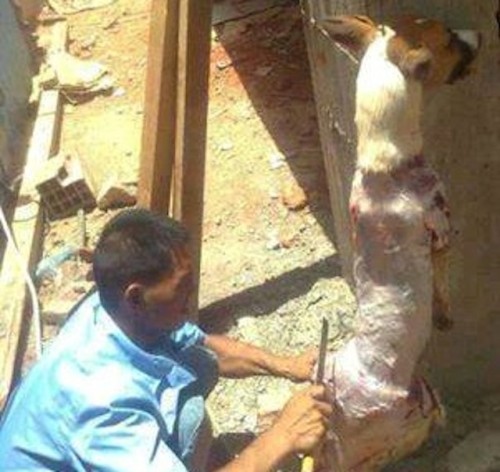 A resident in the Palestinian Yarmouk camp in Damascus prepares to slaughter a dog to feed his family as food supplies run out under siege. Credit: Mutawalli Abou Nasser/IPS.

DAMASCUS, Oct 25 2013 (IPS) - Acute food shortages have reached desperate levels in the Yarmouk refugee camp in Damascus. Leading religious figures in the camps have issued a fatwa permitting the killing and consumption of cats, dogs, mice, rats and donkeys.

“We have been under siege for three months. There is nothing left to eat. This is what has become of us,” said a resident of Yarmouk as he prepared to kill a dog for his family following the fatwa (religious ruling).

Residents are struggling to keep children from dying.

“We have been under siege for three months. There is nothing left to eat. This is what has become of us."

Jana Ahmad Hassan is less than three months old. She is severely malnourished and faces starvation. She was born in the largest Palestinian refugee camp in Syria, Yarmouk. For more than three months the camp has been under siege from the Syrian armed forces. In the face of scarcities this has brought, Jana’s life now hangs in the balance.

“For god’s sake my son, I have a starving baby girl in the camp,” her mother pleaded with one of the soldiers at a checkpoint. “I need to get some milk for her and food for me or she will die.”

Her pleas were violently rebuked. “You think you are a mother? If you understood anything, you wouldn’t have gone out of the camp and left her at home,” the soldier said. She was sent empty-handed back into the camp.

With Jana’s mother failing to produce milk, her father has searched tirelessly for formula for the child but he has repeatedly been told that there isn’t a single box to be had in the south of Syria. Many rebel-held areas such as Yarmouk are suffering from acute shortages of food under the siege.

The United Nations World Food Programme (WFP) aims to bring food assistance to up to 6.5 million Syrians between now and the end of the year. The challenges in doing so are monumental.

The rapidly deteriorating humanitarian situation in Yarmouk and some of the other Palestinian camps in the south, such as Sabina and Sayeda Zeinab, has resulted in a severe breakdown in relations between the residents of the camps and the bodies traditionally charged with their welfare – the United Nations Relief and Works Agency (UNRWA) and the Palestinian Liberation Organisation (PLO).

In mid-July residents of all three camps addressed a letter to the PLO and UNRWA requesting they exert all their efforts to have the siege lifted. They also said that if UNRWA could not fulfill its responsibility, it should transfer the refugee camps file to the United Nations General Assembly.

The residents asked for the International Red Cross to be given access to Palestinian refugees. They warned of an impending state of famine.

Months later no meaningful changes have come. The areas under siege in the south continue to expand, engulfing more than half a million civilians in the southern region, including tens of thousands in the Yarmouk Camp.

“Not so long ago people were allowed to bring in a bit of food. Now they have closed the refugee camp with checkpoints and there is a total siege,” Prof. Abu Salma, an official from the Charity Commission for the Relief of the Palestinian People, told IPS.

Since early August there have been a number of demonstrations outside UNRWA buildings, where the organisation’s flag has been burnt. The feelings of discontent among camp residents have been exacerbated by perceptions of corruption and neglect among UNRWA staff.

“We tried as employees to strike against the practices of the director of UNRWA, so he sent us letters stating that all who strike will be fired,” said a senior employee at the agency, speaking on condition of anonymity. Due to some recent revelations about the practices at UNRWA, a director has been arrested and accused of corruption.

The Charity Commission for the Relief of the Palestinian People has succeeded in providing at least some humanitarian relief to the Palestinian camps. But of late it has come under attack from the Syrian armed forces. Protestations that the organisation is politically unaffiliated and purely humanitarian have not spared it the government’s crackdown.

“They have started arresting our cadres, and arrested the general coordinator of the commission, Ali Shihabi. The situation is worse than bad in the camps, it has actually become a matter of collective murder,” Prof. Abu Salma told IPS.