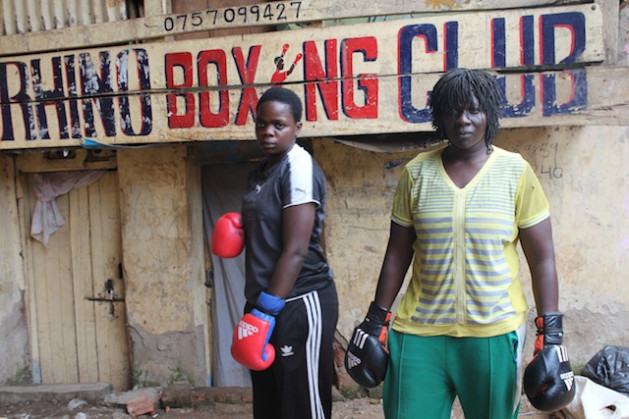 KAMPALA , Oct 2 2013 (IPS) - Helen Baleke took up boxing at 16, after she was attacked by a man in Kampala’s Katanga slum. But the beating turned her into what she is today – one of only several female Ugandan amateur boxers.

“He beat me so bad that I started crying and bleeding from the nose,” Baleke tells IPS, speaking through an interpreter in the local Luganda language from a mud shack in Katanga which she shares with 23 family members.

“I came from the village [in Kayunga District] to Kampala with my pride … and believe that no man could ever beat me,” says the now 24-year-old Baleke.

Baleke had always liked fighting, “even way back in school”. The Rhino Boxing Club in Katanga waived the eight-dollar membership fee to allow her to start training there following her attack.

She spent three weeks learning boxing after the incident, and then tracked down her assailant. When she found him, she grabbed him by the shirt.

“I looked for that guy to show him that I can really defend myself,” says Baleke.

"I want to discover if I’ve got real talent – can I be beaten or am I a champion?” -- amateur boxer Helen Baleke

Today Baleke has been in 14 fights in Uganda and Kenya and has three medals to her name. She and her half sister Diana Tulyanabo, 20, train daily at the Rhino Boxing Club in Katanga along with Lydia Nantale, 17, and Maureen Nakilyowa, 23, who also live in the slum.

Several other Ugandan females have shown promise in the ring. Agnes Adong, Hawa Daku, Eva Zalwango and Fiona Tugume, along with the two sisters, are in fact currently applying to become the first female members of the Uganda Professional Boxing Commission (UPBC), says its vice-president Salim Saad Uhuru.

He has no doubt that the country’s female boxers can go on to great things if given more support.

“We can send a woman representing Uganda to the Olympics, absolutely. We’re going to train them to be the best.”

But Uhuru, who is also vice-chairman of the National Resistance Movement, Uganda’s ruling political party, for Kampala Central District, says corruption is holding the country’s potential athletes back.

“I blame the Ministry of Sports. It has let us down absolutely. If you see the officials who went to the last Olympics, there were more than participants. That is so absurd. How do you pay an official more money than a participant?” He did not elaborate on how much the officials or athletes were paid.

Uganda took 16 athletes to last year’s Games, 12 of them were Olympics newcomers.

But the women of Katanga, which is believed to be home to about 20,000 people, face other struggles besides corruption.

Early marriage and pregnancy along with sexual assault are challenges they face, says Juliet Segujja, the head volunteer for Kids Club Kampala, the only NGO working in the slum.

“Most girls when they are young, they just go on the streets so they can get money from guys,” says Segujja, 23, who lives in Katanga.

Life is far from easy for the women boxers. Nakilyowa, 23, has four children and being a single mother and training daily is a lot to juggle. Baleke and her sibling collect banana peels, which their mother sells on the side of the road near Katanga as animal feed for one dollar a packet.

But they dream of Olympic glory.

But no female boxer from Uganda has ever gone to the Olympics.

Canadian-based junior welterweight Natalie “Sugar” Brown, who has never been to Africa or met the country’s boxing sisters, would love to change this.

She plans to come to Uganda later this year to mentor Baleke and Tulyanabo, as part of the Women Boxers of Kampala Project. It is a long-term project launched by Lori Steinhorst, the president of Bad Girls Boxing and Classic Women Warriors, two Washington-based organisations, which involves matching Uganda’s female boxers with professional American boxers to guide them in the hope of getting them to the 2016 games.

“I would like to encourage the female boxers of Uganda to learn the sport of boxing and to gain all of the benefits in and out of the ring by passing on my experiences and education on to them,” Brown tells IPS.

Brown and Steinhorst, along with Mary “Merciless” McGee, a former U.S. lightweight title-holder, will travel to Uganda to identify female boxers to develop.

Brown, McGee and Steinhorst have retired world champion boxer Laila Ali, the daughter of retired heavyweight boxing legend Muhammad Ali, working with them “behind the scenes”.

“We have no idea if they [Baleke and Tulyanabo] are elite level athletes with the potential to participate at the Olympic level, that is why we must go find out,” Steinhorst tells IPS.

“However…they may be other women boxers there as well that are working towards that goal … we just don’t know at this point.”

If any of the ladies meet Olympic requirements they hope to begin a fundraising campaign and may take the Ugandan women to the U.S. to train.

If they do make it to the U.S. the training conditions will be hugely different from what they are used to. Baleke, Tulyanabo, Nantale and Nakilyowa have benefitted from donations of proper equipment over the past few years. But they still practise regularly with only one pair of gloves between them and without any mouth guards, putting themselves at risk. Nakilyowa and Nantale usually shadow box due to lack of decent sports gear.

They also face another huge problem that threatens to hold back their own professional development: lack of competition.

“We don’t have opponents that are reliable,” says Baleke.

“When we’re going to have a fight the opponent doesn’t show up. It can be so demotivating.

“We want to be involved in serious fights, professional fights. I want to discover if I’ve got real talent – can I be beaten or am I a champion?”