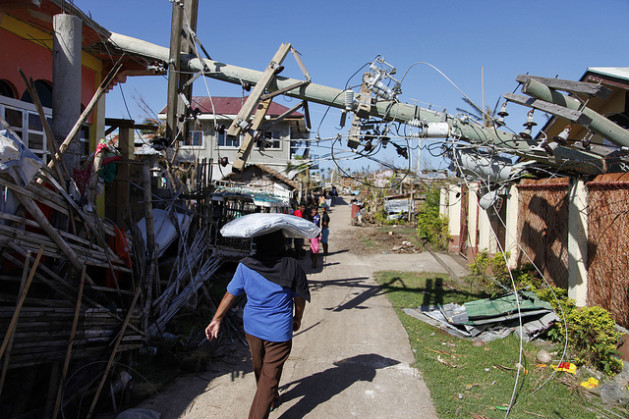 A local woman returns to her home with a new shelter kit. While the destruction is widespread, local rebuilding efforts are already underway. Credit: Simon Davis/DFID/cc by 2.0

WASHINGTON, Nov 21 2013 (IPS) - Nearly two weeks after Typhoon Haiyan devastated parts of the central Philippines, experts and activists here are warning that post-disaster reconstruction needs to be more transparent than past such efforts, while also focusing on a long-term assistance strategy that goes beyond immediate emergency relief.

In recent days, academics and civil society experts have also urged the international community to learn from some of the mistakes made during the disaster responses following the 2010 earthquake in Haiti.

"When the funding dries up, the rebuilding effort still needs to be taken care of." -- Prof. Jesse Anttila-Hughes

“I think there is a big myth that emergency response is split in different stages, with emergency relief coming first, followed by reconstruction and then rebuilding,” Jake Johnston, a research associate at the Centre for Economic and Policy Research (CEPR), a think tank here, told IPS. “But what you actually need is a more comprehensive view, from the very beginning.”

Johnston has closely followed reconstruction efforts in Haiti following the earthquake that left an estimated 316,000 people dead and 300,000 injured, and displaced almost 1.5 million people. He says there are several lessons learned from the Haitian disaster that can be applied to the current crisis in the Philippines.

Keeping locals in the loop

“One thing that, unfortunately, didn’t go very well in Haiti was that the local government and civil society were largely bypassed by foreign organisations,” he says. “For instance, you saw USAID” – the U.S. government’s primary foreign aid agency – “spending almost 1.3 billion dollars in awards to contractors and NGOs that were mostly based in the U.S., with less than one percent of that money actually going to Haitian organisations.”

In the Philippines, he notes, international organisations should keep the Manila government in the lead, making sure that it is a prominent part of the coordination of the entire reconstruction mechanism.

Transparency and accountability can also be vastly improved over past efforts. Experts say doing so would ensure that the organisations working on the ground meet local needs and are effective in doing so.

“Nongovernmental organizations and private contractors have been the intermediate recipients of most of these funds,” Vijaya Ramachandran and Owen Barder, two senior fellows at the Center for Global Development (CGD), a think tank here, wrote last week. “But despite the fact that these organizations are beneficiaries of public funds, there are few publicly available evaluations of services delivered, lives saved, or mistakes made.”

“In Haiti, we saw that the groups on the ground weren’t actually communicating with each other, leading to a situation in which different groups simply duplicated the same things,” CEPR’s Johnston says. “That’s a clear indicator telling us that there wasn’t enough transparency and accountability around the aid that was being provided.”

Greater communication between groups would enable them to be more effective with their work, while also increasing their accountability to donors, he says.

Still, some NGOs currently working in the Philippines are stressing that transparency and communication are already at the core of what they do.

“We try to be very transparent about our finances, and we make sure that everyone sees where all of our money is going,” Rachel Sawyer, a member of the communications staff at All Hands Volunteers, a non-profit that works in disaster-stricken areas both in the U.S. and internationally, told IPS.

“We are also constantly communicating with other organisations. When we see one, we either partner with them or we try to meet the unmet needs somewhere else.”

She warns that “‘disaster relief’ is obviously a very broad term.”

One other major issue experts point to is the problem of ensuring that the outpouring of funds raised in the immediate aftermath of a disaster is maintained over time, which is what long-term reconstruction requires.

“While media, funders and emergency responders spend a short amount of time dealing with immediate needs,” Lori Bertman, the president and CEO of the Louisiana-based Pennington Family Foundation, a grant-making institution, wrote on Monday, “this does not create the infrastructure to mitigate future risk, and leaves long-term needs such as resettlement, mental and public health, as well as fiscal viability, unfunded and unattended.”

Bertman’s article was later endorsed by the Centre for Strategic and International Studies, a think tank here.

Some have suggested that this short-term response may be partially due to the cyclical nature of media coverage, which tends to shift the public’s attention quickly.

“Obviously the news cycle is a cycle, and trying to get people to give more attention is not really going to work,” Jesse Anttila-Hughes, a development economics professor at the University of San Francisco, told IPS.

He notes, however, that the current strategy can be improved.

According to the latest information released by the National Disaster Risk Reduction Management Council, the Philippine government’s agency monitoring the current crisis, Typhoon Haiyan has so far killed over 4,000 people, leaving almost 4.5 million people without a home.

Earlier this week, the Washington-based World Bank announced that it would release 500 million dollars in funding to support the Philippines’ effort in recovery and rebuilding. The funds, which are a loan, came in response to a request by the government in Manila, and Bank officials are already looking to see how this money can be stretched for the long term – and how it can be used to sidestep some of the problems that have beset previous reconstructions.

“Given the scale of this disaster, the country will need a long-term reconstruction plan,” Axel van Trotsenburg, the World Bank’s vice president for East Asia said on Monday. “We can bring lessons learned from our work in reconstruction after disasters hit Aceh, Haiti and other areas that might be helpful in the Philippines.”