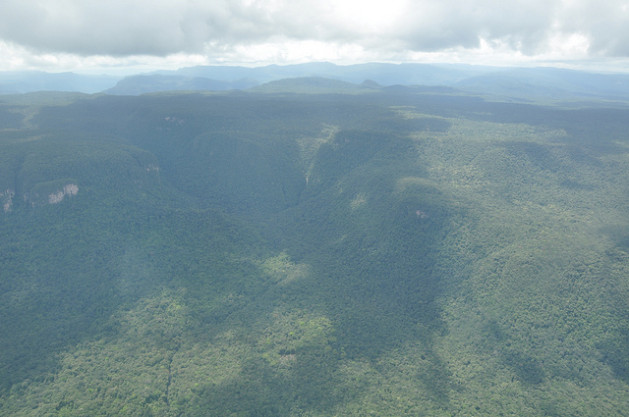 GEORGETOWN, Nov 11 2013 (IPS) - Guyana is engaged in a balancing act to save its rainforest, regarded as a living treasure, from the destructive activities of miners digging their way to another kind of treasure buried beneath this fragile ecosystem.

Natural Resources Minister Robert Persaud warns that the country stands to lose about 20 million dollars from the forest conservation fund because it has lost more of the Amazon, mainly to gold and diamond mining.

In November 2010, Guyana and Norway established a partnership that is the second biggest Reducing Emissions from Deforestation and Forest Degradation Plus (REDD+) interim agreement in the world. Norway committed to giving Guyana up to 250 million dollars by 2015 for avoided deforestation and degradation.

Guyana met the performance requirements for two consecutive years, earning approximately 70 million dollars which has been transferred by Norway into the Guyana REDD+ Investment Fund (GRIF).

But the preliminary third national report on deforestation did not contain good news.

“We’ve had a change in terms of deforestation rate, the level of 0.079 [percent], and this rate of change is higher than the previous year which was 0.054 percent,” Persaud told IPS.

In percentage terms, Guyana has breached the agreement with Norway because it has increased from 0.054 percent in the Year Two assessment to 0.079 in Year Three, which is above the agreed threshold of 0.070.

The report will be finalised by independent auditors for Durham University and Norway by Nov. 30.

The funds earned by Guyana under the agreement with Norway are directed towards low carbon development strategy (LCDS) projects that have a transformational effect on the national and local economy, as well as supporting Guyana’s efforts to adapt to climate change and to increase resilience to future climate change.

However, some native Guyanese feel marginalised by the deal.

“The land, our resources, and keeping the environment healthy for our people and our children are key issues for us,” Laura George, a representative the Amerindian People’s Association, told IPS.

“One of the things we told them is that you need to consult with communities. Government should not pressure our Toshaos [Amerindian village leaders] into endorsing projects that we do not understand, that we have not fully understood,” she said of the agreement with Norway.

John Alfred, a former Toshaos from Region 9, told IPS that for many years their rights have been infringed with the destruction of the forest.

Despite the latest report, Persaud told IPS Guyana “continues to be the country with one of the lowest rates of deforestation within South America.”

He conceded that 94 percent of the changes stem from mining activity, but said it was conducted “with the knowledge of the Guyana Geology and Mines Commission (GGMC), working with legitimate miners, fulfilling their own economic activity while following the national guidelines or laws as well as our regulations in this regard.”

Patrick Harding, the president of the Guyana Gold and Diamond Mining Association (GGDMA), argues that it’s a numbers game.

“We stand maybe to lose about 40 percent of the Norway funds or about 25 million dollars,” he told IPS. “The mining industry, including bauxite, will give the government foreign exchange of about one billion dollars. We have an industry that is providing jobs for tens of thousands of Guyanese.”

He insisted that the GGDMA is also concerned about deforestation. “Our motto is mining with the environment in mind and we are very careful about the environment. We encourage our members to follow the guidelines of the Environmental Act and the Mining Regulations.”

“Of course we are concerned about the environment but you cannot have development without some additional disturbance,” Harding said.

Former Guyanese president Bharrat Jagdeo has been championing the cause of developing countries in the fight against climate change, highlighting the role that the country’s forests play in absorbing carbon emissions.

In 2009, under Jagdeo’s leadership, Guyana’s Low-Carbon Development Strategy, commonly known as the LCDS, was developed.

Under the programme, the country receives payment for forest ecosystem services. These funds are used to direct economic activities onto an environmentally-friendly, low-carbon trajectory for its growth and development.