Reaching Quietly for the ‘Solidarity Basket’ 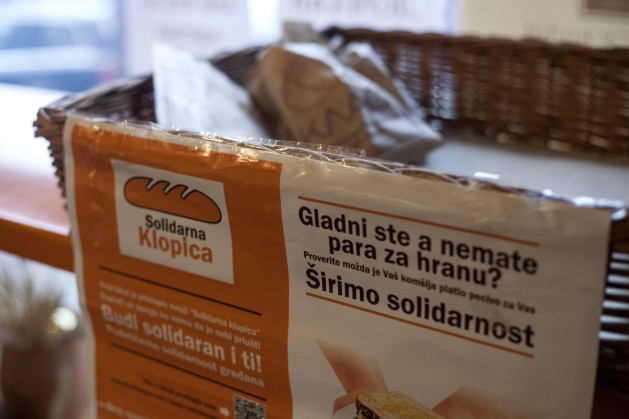 A breadbasket left in a Belgrade store for the needy to dip into. Credit: Vesna Peric Zimonjic/IPS.

BELGRADE, Dec 12 2013 (IPS) - In the early morning hours, as hundreds of people grab their breakfast at a busy bakery in Beogradska Street in the Serbian capital, a very special basket quickly fills up with croissants, rolls and breads. It is the ‘solidarity basket’.

It’s a concept that around 60 bakeries all over Serbia have introduced. While ordering something for themselves, customers buy an additional bread, croissant or bun and place it in the basket – for the needy.

“Approximately one in 10 customers buys an extra item and leaves it in the solidarity basket,” said baker Veljko Antic.

"Those who rely on these bits come much later. They usually sneak in and hurriedly walk away."

“Those who rely on these bits come much later. They usually sneak in and hurriedly walk away. They are ashamed, sad and grim…That is why we’ve placed the basket close to the entrance of our bakery so as not to add to their shame,” Antic told IPS.

This is the first initiative of its kind as poverty hits Serbia hard. Similar campaigns are unfolding in neighbouring countries too, mostly nations born out of erstwhile Yugoslavia.

Latest statistics show that 700,000 people in Serbia, which has a population of 7.2 million, live below the poverty line. As defined by the World Bank, this means they survive on less than 1.25 dollars a day. Out of 1.02 million children aged 0-14 in Serbia, 12 percent are poor and 6.6 percent suffer from malnutrition, according to official data.

The ‘solidarity meal’ was introduced by a group of young internet enthusiasts from the portal www.kioskpages.com that promotes online shopping. The inspiration for their initiative – “Express solidarity, buy food for those who need it” – came from Italy, where people leave small change for coffee for those who cannot afford it.

“We liked the idea, but decided to focus on food,” Nina Milos, 24, from Kioskpages told IPS. “People in Serbia are in greater need of food than coffee.”

Serbia has a total of 68 Red Cross-run soup kitchens, but some are facing closure due to lack of funds. Red Cross officials have for long said their efforts are not enough to feed the needy.

“We were worried about the logistics of reaching out to different sets of people – who would introduce the solidarity meal, who would support it, who would use it, as the latter certainly have no access to the internet,” Milos said.

“That’s why we opted for posters at bakeries and ads in free newspapers, and we also networked with NGOs that work with the homeless or the poor,” she added.

According to her, the campaign has worked best in the capital, Belgrade, and the northern city of Novi Sad.

And that’s not all, she said. Many greengrocers have started offering for free the fruits and vegetables they haven’t sold during the day. “Several takeaways have joined in,” Milos said.

A similar campaign is being introduced in neighbouring Macedonia too. According to Milos, 10 bakeries in the capital, Skopje, and in the town of Kumanovo have joined the initiative.

“People are impoverished and hardly think about others,” she said. “However, there are those who are well to do or even those who are not so well off but can spend some extra money for those who need it,” she said.

The transition into a market economy after the Yugoslav civil wars of the 1990s and the economic crisis of 2008 has battered Serbia. Unemployment stands at 24.1 percent, affecting more than a third of the workforce.

The situation is a bit better in the other nations of erstwhile Yugoslavia, but poverty is knocking on the doors of many in the region.

Slovenia, with an unemployment rate of 12.8 percent, is still holding up well. But there too, a catering service, www.minestra.si, has introduced a similar initiative called ‘an afterwards meal’.

“Such meals are given away to [the Catholic church humanitarian organisation] Caritas for further distribution,” said Peter Bostjancic of Minestra. “They are consumed by the poor and also by employed people whose incomes are too small for them to get by on,” Bostjancic told IPS.

In Croatia, where unemployment stands at 19 percent, the “urban poor” phenomenon is growing. “These are mostly well-educated people who have been left jobless after the companies they worked for closed down,” a source from Croatian Caritas told IPS on condition of anonymity.

“These are people who, until recently, were above the poverty line, but loss of jobs, rising prices and the burden of mortgages have put them in difficulties,” the source said.

And so, the idea behind the solidarity basket is catching on.

Belgrade bakeries work until late evening. Some people who depend on the solidarity basket come to Beogradska Street only when there are not many passersby.

One of them is 43-year-old Zorana Savovic, a single mother with two children who works for a meagre salary at a newspaper stand near a bakery.

“I’m ashamed to have to do this,” Savovic told IPS.

“But it provides the evening meal for me and my children. I eat nothing during the day and keep an eye on the basket across the street. I go in just before they close and then hurry home to my kids with food.”