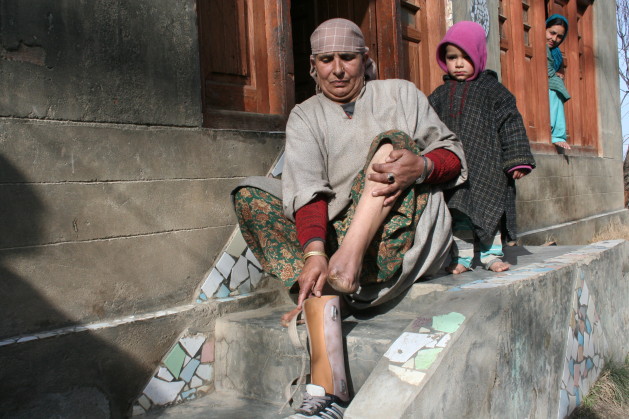 A woman victim of a buried shell. Credit: Athar Parvaiz/IPS.

SRINAGAR, India, Dec 2 2013 (IPS) - A vast and picturesque meadow called Tosamaidan, about 112 km west of Jammu and Kashmir’s capital Srinagar, has now become the rallying point for hundreds of villagers who want the artillery exercises being carried out there by the Indian Army to stop.

For, the unexploded shells of Tosamaidan have been tearing their lives apart.

Reshma, a villager, lost her 19-year-old son Bilal Ahmad in 1997 to an unexploded shell while he was playing around the meadow. “As a mother, I don’t want to see children getting killed in like this,” Reshma told IPS.

In 1964, the meadow spread over 375 acres had been taken on lease by the Indian Army from the state government for 50 years. Now that the lease period is coming to an end in April next year, the residents of more than 30 villages around Tosamaidan have started a massive campaign against its renewal.

The shells have resulted in heavy casualties and maimed hundreds of people, besides killing livestock and hitting the picturesque area’s tourism potential.

They say the shells have resulted in heavy casualties and maimed hundreds of people, besides killing livestock and hitting the picturesque area’s tourism potential.

“We don’t want our children to suffer like us,” said Fatima Begam of Khag village who has three children.

“If our parents had said in 1964 that the army should not be allowed to carry out military exercises in the vicinity of our villages, we would not have suffered,” Begam told IPS outside her home.

Picturesque Kashmir valley has for decades been at the heart of a bloody conflict between India and Pakistan. At least 60,000 people have lost their lives since an insurgency broke out in 1989, with the fighters demanding ‘freedom’ for Kashmir. The region has seen heavy mobilisation of troops by the Indian government.

Now the army has approached the Kashmir government for a fresh lease for Tosamaidan for another 20 years.

Lt Col. N. N. Joshi, army spokesperson in Srinagar, told IPS: “I can’t comment on this beyond the fact that the issue of lease extension is currently being deliberated upon.”

But the residents of Khag, Beerwah, Arzal and many other villages are bitterly opposed to an extension.

An inquiry by a Kashmiri lawmaker in the state assembly in August this year revealed that many shells left behind during army exercises have accidentally exploded, killing 63 people over the years. The statistics were provided by Chief Minister Omar Abdullah.

Ever since, the villagers who had been demanding an end to the military exercises around their homes have garnered the support of human rights activists as well as Kashmiri politicians.

Mehbooba Mufti, president of the Peoples Democratic Party (PDP), has demanded that instead of military exercises, the idyllic beauty of Tosamaidan should be used as a tourist destination. “You can’t ignore the pleas of thousands of villagers who have been suffering on many fronts because of these military exercises,” Mufti told IPS.

Members of her rival political party, the ruling National Conference party, also agree that the lease should not be extended for the army.

The Kashmir government has constituted a high-level committee to give its report to the state government. But many feel the government should deny an extension at the current site due to the ground realities.

“Both on principle and legally, the government has enough reason (to say no). Besides, a democratically elected government should always consider the genuine demands of its people,” a widely circulated Urdu daily, Kashmir Uzma, wrote in its editorial on Nov. 12.

“These artillery exercises hamper agricultural and livestock related activities apart from spoiling all chances of developing the area as a tourist destination,” said Arjumand Talib who has extensively written on conflict and economy in Kashmir.

Akhtar Hussain, another villager of Khag, said that developmental activities had become virtually impossible. “A few years back, the army disallowed the construction of the road in the area on the plea that it would give villagers easy access to the army camp,” Hussain told IPS.

Villagers say not only do they stumble upon unexploded shells in the upper areas while grazing their livestock, but shells also roll down to lower areas when torrential rains come in summer.

In May this year, a major tragedy was averted when a villager informed a social activist about an unexploded shell in a nearby stream.

“One of our villagers, Bashir Ahmed, telephoned me saying he had found a suspicious item near the stream. I informed the police right away and got the shell exploded safely,” Raja Muzaffar, a social activist, told IPS. “But unfortunately this does not always happen. Most often people stumble upon these shells and start tampering with them or step on them accidentally.”

Raja and other social activists have filed a petition before the State Human Rights Commission (SHRC). “We are quite hopeful that the SHRC will give clear directions to the state government about not leasing out the land any further,” Raja told IPS.