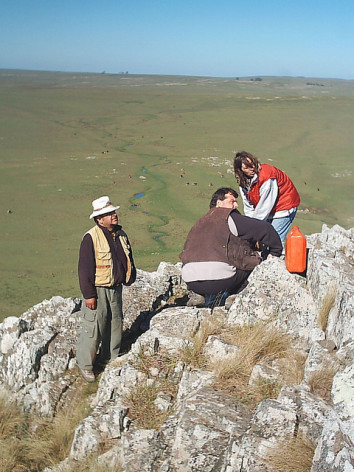 MONTEVIDEO, Dec 3 2013 (IPS) - The Uruguayan government, which recently passed a law on large-scale mining, does not actually have a clear idea of the country’s mineral wealth and has only just now proposed a geological study to find out.

For decades, geological studies have been low priority in this farming country of gently rolling hills, where there are neither mountains, volcanoes nor geological faults.

That was until the appearance of plans by Aratirí, a subsidiary of the Indian mining company Zamin Ferrous, to extract some 18 million tonnes of iron ore a year from a huge open-pit mine in the central Uruguayan district of Valentines, on the border between the provinces of Treinta y Tres and Florida, 234 km north of Montevideo.

The plans unleashed a heated debate in this small country wedged between Argentina and Brazil.

And when the controversial new set of mining rules that regulate large-scale mining projects was passed in early September, many claimed they were tailor-made for Aratirí.

Only in late October did the left-wing Broad Front government decide to hold an international tender for a geological survey of the country, for which seven companies submitted bids.

Pier Rossi, the head of the national mining and geology office, Dinamige, told Tierramérica* that up to now, the state had left the exploration of possible mineral resources up to private companies.

Mining on what scale?

Mining initiatives that use substances or chemical products hazardous to health or the environment, which have annual electricity consumption of 500 GWh or more, or which produce acid mine drainage can also be classified as large-scale.

The aim of this study is “to detect magnetic anomalies to define the areas of interest, without waiting for private firms to do the work,” Rossi said.

The information from the magnetic and radiometric aerial survey will indicate “the ages of evolution of the minerals in the rocks” in order to assess their value, added Rossi, a geologist by profession.

“Once all of the information is in, the state will be in a position to negotiate on an equal footing with the companies,” he said. “Then I will be able to decide when and how the work will be carried out.”

But even with a geological survey, the state is unlikely to have the capacity to oversee what the companies do, said Leda Sánchez, a professor in the geology department of the Science Faculty at the University of the Republic.

“The state is responsible for ensuring that things are done properly, but it is a vicious circle of problems. Without good geology, there is no good mining,” Sánchez said.

Among the shortcomings pointed out by the professor is the impossibility of establishing clean-up plans that mining companies must comply with after they are done working in a given area.

Rossi said “we’re not going to fix what hasn’t been done in 60 years. We have to redefine everything.”

Even without the new data, Sánchez disputed the “extraordinary volumes” claimed for the Aratirí iron deposit, which she told Tierramérica is “actually small.”

“The dimensions seem big to us because we’re a small country. We aren’t a mining country per se. Uruguay will continue to be a livestock-producing country,” she said.

There are 12 million head of cattle and 7.8 million sheep in this country of 3.3 million people.

The mining industry chamber is also opposed to the term “large-scale”.

It is not possible to have a “mega” project in Uruguay given the size of the territory, one of the heads of the chamber, who asked not to be identified, told Tierramérica.

The law applies to any mining projects of over 400 hectares. “If you think of it in terms of cattle, only 200 calves can be raised on that much land, and no one refers to ‘large-scale’ livestock production,” the businessman commented.

One of the aspects of the law that the mining chamber has the most problems with is that the mining permit and contract with the government are only granted once the companies have invested in exploration.

In the past, the permits were issued prior to the exploration work. The chamber says that only one out of 1,000 exploration efforts are successful.

The source with the chamber said the state “has no idea” about the country’s mineral resources. “They only have hypotheses,” he said, pointing out that Uruguay doesn’t even have a mining engineering degree programme.

Professor Sánchez said the companies that mine for gold, limestone, iron ore, semi-precious stones and other mineral products should make a contribution to the University of the Republic, “because they are the ones who take” the country’s geology students.

“As an academic institution we are not prepared for the influx of students we are receiving,” she said. According to Sánchez, what is needed is not only economic support from the private sector, but also academic interaction.

The professor also complained that the government had put into effect a law on large-scale mining without increasing the budget of the Science Faculty.

When Congress discussed “taxes on mining companies, no one remembered that the geologists receive their training at the University of the Republic, which is under-funded,” she said.

The University of the Republic, the oldest and most prestigious higher education institution in the country, is tuition-free.