But the raise will not affect Haiti’s 30,000 assembly factory workers, who are supposed to already be receiving about seven dollars for an eight-hour day – about 87 cents per hour. Recent studies have found rampant wage theft at almost two dozen of the factories that stitch clothing for companies like Gap and Walmart.

“If I hear there is going to be a demonstration, I’ll be there. I cannot make it with this pocket change. The bosses know that." -- Haitian garment worker

The wage hike comes almost five years after the Haitian parliament asked for a 200-gourde minimum wage, then worth 4.96 dollars a day, but failed to overcome Washington-backed industry opposition [see sidebar].

Agreed to on Nov. 29 by a government-convened Council on Salaries (CSS) – made up of labour, business and government representatives – the raise falls far short of the minimum wage of 11.63 dollars (500 gourdes) that factory worker unions and others were demanding.

Last month, in the capital and in Haiti’s north, the Collective of Textile Factory Unions federation (KOSIT), which represents workers in three industrial parks, mobilised for the 500-gourde wage.

On Nov. 7, to chants of “500 gourdes! 500 gourdes!,” over 5,000 workers and supporters marched outside the gates of a free trade zone on the border of the Dominican Republic in Ouanaminthe. Hundreds of others marched on Nov. 26 in the capital.

The factory owners countered late last week with an open letter which pled to “keep Haiti competitive” with what they identified as their “big rivals” – Bangladesh, Cambodia and Vietnam, countries all known for harsh conditions and abuse. 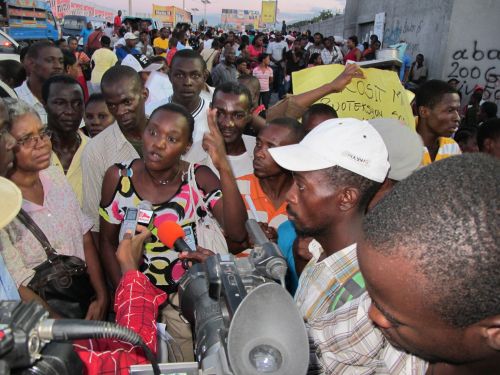 Union members, other workers and their supporters demonstrate to demand a 500-gourde minimum wage in Port-au-Prince on Nov. 26, 2013. Credit: Batay Ouvriye

“We recognise that the clothing and assembly sectors are not ends in and of themselves, but they can be a very important stimulus and can serve as a motor to help Haiti open up and present itself as a country that is changing and modernising,” said the 23 Haitian, Dominican and South Korean factory owners and industrialists from the Association of Haitian Industries (ADIH).

Yannick Etienne of Batay Ouvriye (Workers Struggle), a labour group which supports KOSIT and other textile unions, said her organisation and the unions disagree with the 225-gourde salary.

“We think it is a shame that the CSS union representatives agreed to the miserable wage of 225 gourdes. At a meeting the night before, we requested that they refuse to sign any agreement that was less than 300 gourdes,” Etienne told IPS.

The country’s 30,000 workers – almost two-thirds of them women – in Haiti’s free trade zone assembly factories stitch together clothing for Gap, Gildan Activewear, Hanes, Kohl’s, Levi’s, Russell, Target, VF, and Walmart. Haitian law stipulates that “the price paid per production unit… must be set in a way that permits a worker to earn at least 300 gourdes for an eight-hour day.”

Salary Hike Was Blocked in 2009

The last time minimum wage was discussed, in 2009, the U.S. Embassy got into the game.

According to cables released by WikiLeaks and analysed by The Nation and Haiti Liberté, ADIH members worked with the embassy to prevent parliament from raising the minimum wage from nine to 62 cents an hour, or from 70 to 200 gourdes

At the time, President René Préval appeared to be supportive.

ADIH fought hard against the plan, issuing a report partially funded by USAID that claimed Haiti would be “uncompetitive” if factory wages rose.

But recent studies by three different international groups, including the U.N.’s International Labour Organisation (ILO), have documented that the vast majority of workers receive the legal minimum only rarely: about 25 percent of the time, according to the ILO.

A 29-year-old mother who works at the Multiwear factory, which makes tee-shirts for Hanes, is one of those being gypped. (Like all workers interviewed for this story, she agreed to speak only on the condition of anonymity.)

“I support my four-year-old, and two sisters, and one brother,” she told IPS. “Sometimes I make the quota and get 300 gourdes, but just once in a while.”

In its October 2013 report, the ILO’s Better Work textile factory monitoring programme found all 23 factories surveyed, including Multiwear, to be “non-compliant” with the law. To be “compliant,” Better Work said that “at least 90 percent of experienced workers” should be able to make 300 gourdes in an eight-hour day.

The mother is her family’s sole support.

“I am the oldest,” she continued. “Right now, my husband is not working. We live in one room.”

She wants the minimum wage to be raised, but said “many people won’t even show up to a sit-in, because if the bosses think you support a wage hike, you’ll immediately be fired.”

Workers, KOSIT leaders, several reports and many economists agree that 225 gourdes, and even 300 gourdes, are not living wages.

A 2011 study by the U.S.-based AFL-CIO’s Solidarity Centre held that a factory worker living in the capital and supporting two children would need to earn about 29 dollars per day (1,152 gourdes), six days a week, to support his or her family.

“When the boss started to hear talk about the minimum wage going up, he clamped down on us,” said the mother of three, who said she has worked at One World for eight years.

“You have to do 75 dozen pieces, but not every job is the same. Sometimes you can make the quota, but sometimes you can’t. No matter what the job is, the number is the same. Once in a while, if I work really hard, I can at least make 225 gourdes,” she added.

Both Gildan and Fruit of the Loom recently released statements promising to ensure their subcontractors respected the 300-gourde minimum.

“It is our view that the clear intent of Haiti’s minimum wage law is for production rates to be set in such a manner as to allow workers to earn at least 300 gourdes for eight hours of work in a day,” Fruit of the Loom said in a statement. “Based on our independent investigation, we concur with the WRC that the garment industry in Haiti generally falls short of that standard.”

In addition to denying most workers the 300-gourde minimum, bosses were regularly cheating labourers out of overtime and making them work essentially for free, according to a report from the Washington-based Workers Rights Consortium (WRC), issued Oct. 15, 2013.

In Stealing from the Poor, based on worker interviews and pay stubs from five factories (four in the capital and SAE-A at the Caracol Industrial Park), the WRC found repeated cases of employers paying workers the incorrect amount for overtime hours. (The ILO reported only nine percent of factories cheating workers out of overtime.)

In the capital, WRC maintains that at the four factories surveyed – One World, Genesis, Premium and GMC – workers were “being cheated of an average of seven weeks’ pay per year.” Workers sometimes willingly work “off the clock” in order to make the quotas necessary to be paid 300 gourdes, the group reported.

“The government does not play the role of arbiter, as it should,” said the university professor while speaking at a Nov. 18 meeting on the wage issue. “Government authorities instead tend to listen to the embassies, to ADIH… Our government is really tied to the upper class, the oligarchy.”

The current government – whose slogan is “Haiti is Open for Business!” – has pushed Haiti’s low wages at numerous national and international conferences.

The mother of three agrees that the minimum wage needs to go up to at least 500 gourdes.

“If I hear there is going to be a demonstration, I’ll be there,” she told IPS. “I cannot make it with this pocket change. The bosses know that. They are just cruel.”