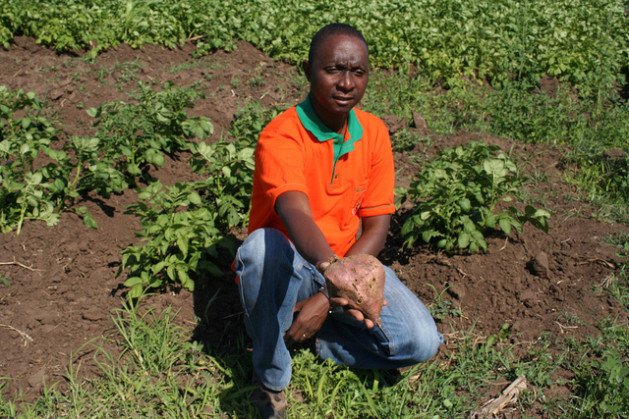 Jose Ricardo is one of the few sweet potato breeders in Mozambique. Credit: Busani Bafana/IPS

ACCRA, Ghana, Jan 2 2014 (IPS) - For the few plant breeders in Africa like Vivian Oduro, working for an international research institution is an obvious choice, with prestige and benefits any agricultural scientist would find hard to decline.

But Oduro – a sweet potato breeder – is staying put. She will use her expertise in Africa for the farmers with whom she now shares a special bond because she understands their challenges intimately.

"We have to transform African agriculture by training our scientists who can solve the problems of food crops, and by training them well in Africa for Africa." -- Prof. Eric Danquah

A PhD student at the prestigious West Africa Centre for Crop Improvement (WACCI) in the Ghanaian capital, Oduro is part of a group of new thinkers in crop breeding who see fresh opportunities in Africa.

“Working overseas is attractive, but so is Africa when you understand what needs to be done,” Oduro told IPS.

She said her passion for breeding sweet potatoes has led her to develop 30 different strains after consulting smallholder farmers in Ghana. By end of 2014, Oduro anticipates the completion of field trials leading to the development of 50 varieties for multiplication and release to farmers.

“When you handle a crop for a long time, you develop love for it. I call my progenies my babies and would not want to leave this for something else or go elsewhere. My training made me better understand the challenges faced by African farmers, something I could have missed had I trained elsewhere,” said Oduro.

Accelerating Africa’s food production has brought more farmland into play, but often without a matching increase in crop yields, a problem scientists blame on climate change, low adaptation of high-yield crop varieties, poor soils and more importantly, lack of plant and seed breeders with an intimate knowledge of what Africa needs, says Prof. Eric Danquah, the director of WACCI.

Established in 2007 to train plant breeders over a 10-year period following a grant from AGRA, WACCI is aiming to become the foremost centre for the training of plant breeders for Africa. It may not be far from its goal, having made history by graduating eight PhD students in a single discipline – plant breeding – on the same day in July 2013. Currently, 54 students are at various stages of PhD training in plant breeding.

“We need political will to get the training right. We cannot adopt a partisan approach to this because this is too important to toy with. We have for too long paid lip service to agriculture,” said Danquah. “Our scientists can think like any other plant breeders anywhere in the world and a number of people around the world are looking for collaborators to access grants. Our scientists are there because they are strategic thinkers and team players, and are results-driven.”

Data on the number of plant breeders in Africa is outdated. Ideally, Danquah said, for every crop in every agro-ecological region, a country requires two well-trained plant breeders who can use both conventional and modern techniques to develop new crops.

It costs up to 140,000 dollars to train a plant breeder to PhD level (a four-year programme) at WACCI, a cost Danquah said has been criticised as too high but is justified in keeping to high standards that produce high-quality scientists.

Africa, Danquah told IPS, will continue to lose its few seed breeders to foreign institutions at the expense of its agricultural productivity and competitiveness unless there is investment in the training and retention of plant and seed technology specialists.

“We have to transform African agriculture by training our scientists who can solve the problems of food crops, and by training them well in Africa for Africa,” Danquah told IPS, lamenting that while African governments have agreed to invest at least one percent of their budgets in agriculture, many have not followed through.

“Unless we invest at least one percent of our budgets into science and development to train plant breeders Africa needs urgently, we are bound to fail,” Danquah said, calling for national research funds instituted by law and governed by independent apolitical institutions and not by politicians.

WACCI, recently named a beneficiary of the World Bank’s Africa Centres of Excellence project, has launched a 30-million-dollar endowment to bankroll the future training of plant breeders in Africa.

The Alliance for a Green Revolution in Africa (AGRA) has for more than five years funded more than 500 MSc and PhD students in various agricultural disciplines in 15 universities in Sub-Saharan Africa.

“The benefits of this approach are manifold. It is considerably cheaper than it is to send the scientists over to Europe or to the U.S., ” Karuku said, adding “These students are well-versed in local problems and can offer viable as well as sustainable solutions, be it crop breeding, soil health management, policy or enterprise development.”

AGRA has invested in a programme to increase the number of crop breeders in Africa. Mozambique is one of the beneficiary countries, where Jose Ricardo is one of the few sweet potato breeders. Ricardo has helped develop and release 15 sweet potato varieties suited for Mozambique, where sweet potatoes are the third most important crop after maize and cassava.

According to AGRA’s inaugural Africa Agriculture Status Report (AASR), launched in September 2013 in Mozambique, there is a serious lack of data on existing agricultural skills capacity in Africa. The AASR seeks to provide a more accurate picture of agriculture statistics in Africa. The report shows that Africa has the lowest research capacity of any part of the world, with only 70 researchers per million population compared to 2,640 researchers and 4,380 researchers in North America and Japan, respectively.

“It is not only the numbers that are needed, the quality of scientists has to improve to match the changes in the agriculture landscape,” the report noted.

Maize breeder Pedro Fato, who works for the Agricultural Research Institute of Mozambique (IIAM), returned to Mozambique after earning his PhD because he believes his skills are critical for his country. Fato has worked on a maize variety tolerant to diseases and limited water, in a nation where droughts and floods are a recurrent problem for farmers.