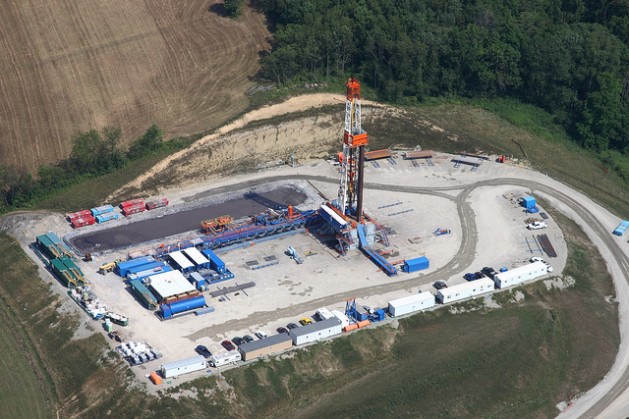 A gas drilling installation on the Marcellus Shale. It extends deep underground from Ohio and West Virginia northeast into Pennsylvania and southern New York. Credit: Bigstock

WASHINGTON, Jan 21 2014 (IPS) - A controversial new certification process that could cover a significant portion of the U.S. oil-and-gas “fracking” industry began accepting applications on Tuesday, indicating the formal start of an initiative that has the backing of some key industry players and some environmentalists – but by no means all of either.

In recent years, the Centre for Sustainable Shale Development (CSSD), a non-profit based in Philadelphia, has been meeting with green groups, regulators and philanthropic foundations, as well as with major oil and gas producers with interests in a major petroleum-rich rock formation in the eastern part of the United States, known as the Marcellus Shale or Appalachian Basin.

"You can’t just say we’re giving in to the industry, and you can’t say the industry is ducking its responsibilities." -- Davitt Woodwell

The new certification process revolves around 15 performance standards aimed at mitigating against air and water pollution from the use of new technologies – known broadly as hydraulic fracturing, or “fracking” – that have upturned the U.S. energy market. While this has resulted particularly in a glut of natural gas, it has also led to a spectrum of environmental and health concerns.

Yet these technologies have proven so adept at obtaining previously hard-to-access gas formations that other countries are now moving quickly to use them.

“One of the most surprising and enjoyable parts of this launch has been the interest outside of the basin this has received,” Andrew Place, the CSSD’s interim executive director, told IPS during a press call Tuesday.

“While we were careful to build this process around the Appalachian Basin, the model, its collaborative nature, the certification and the robust assurance of its standards are scalable across other basins in North America and globally.”

Place says his office has already received calls from around the world expressing interest in the new CSSD certification process, from Brazil, China, Kazakhstan, Europe and other countries.

“They’re all interested in the diverse voices that built this collaborative effort, and are looking at this as a model for other basins and globally,” he says.

“The public conversation has been maturing in such a way as to get away from the polarisation and sensitivity that this issue has [taken on]. It’s absolutely fundamental that you need to have broad social discourse on these questions.”

Founding members of the CSSD include major industry players (Shell, Chevron and others), a prominent green group (the Environmental Defense Fund), as well as local groups. While four oil and gas companies have signed onto the new protocol, many others have thus far declined, though Place says conversations with other companies are progressing.

For now, those that are a part of the initiative are expected to be among the first to start the certification process, which is slated to take about six months and will be overseen by an external auditor. Any companies that fail to pass the full certification process will be given a timeframe within which they will need to come into compliance, and all auditing processes are intended to result in significant documentation available to the public.

“We look forward to entering into the CSSD verification and certification process,” Paul Goodfellow, a vice president for Shell, told IPS.

“As a founding member of CSSD, we are proud of the achievements of this new organisation and look forward to other operators in the region seeing value in this approach and we hope our experience will encourage other operators to seek CSSD certification as well.”

Meanwhile much criticism remains around the industry’s response to fracking concerns. Local communities have complained of significant health impacts from hydraulic fracturing in their vicinities, particularly due to contaminated water tables.

Yet thus far major companies have downplayed or rejected outright such allegations. Even while fracking techniques involve the injecting of a cocktail of chemicals into deep underground rock formations, U.S. law does not require that these chemicals are disclosed to the public.

In some areas, the fracking boom has led to divisive fights within communities, as well as between communities and companies. In December, the Supreme Court in the state of Pennsylvania – a key area of the Marcellus Shale – struck down what was widely seen as an industry-friendly law allowing oil companies to engage in hydraulic fracturing even if local communities didn’t want them there.

“Our position all along has been that there are costs and benefits to this energy development. Because we all want to use energy, as it goes forward you have to push the envelope,” Davitt Woodwell, executive vice-president with the Pennsylvania Environmental Council, a coordinating organisation working on green issues in the state and a founding member of the CSSD, told IPS.

“In my view the resulting process is one that should be considered in other areas – the process of developing these standards and the certification is very defensible. You can’t just say we’re giving in to the industry, and you can’t say the industry is ducking its responsibilities, because all of this is meant to go beyond what they’re currently required to be doing.”

Yet others continue to question whether hydraulic fracturing – or any fossil fuel extraction – can ever be “sustainable”. Critics also question how much good any voluntary certification process can do, even one, like the CSSD, that imposes stricter requirements than either current state or federal regulations.

“While voluntary programmes like that of the Centre for Sustainable Shale Development have the potential to help raise standards for companies that participate, they do not eliminate the dire need for legally binding, enforceable federal and state rules that apply to every oil and gas company engaged in fracking, across the board,” Kate Kiely, a spokesperson for the Natural Resources Defense Council (NRDC), told IPS.

“If the oil and gas industry wants to get serious about protecting people and communities, it must stop fighting these at every turn.”

Kiely also noted that much will depend on the broader reaction among the oil and gas industry.

“We’ll be watching companies to see if they step up and participate,” she says. “And we’ll continue encouraging the oil and gas industry to put their money where their mouth is when it comes to best practices like these, and not only adhere to them voluntarily but support getting them on the books so that everyone has to play by the same rules.”