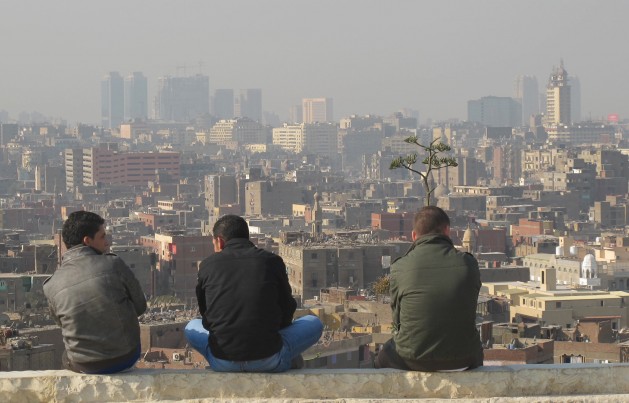 Three boys in the Moqattam area look out over Cairo, the growing population of which is rapidly depleting already scarce water resources. Credit: Shelly Kittleson/IPS.

CAIRO, Feb 6 2014 (IPS) - Heavy reliance on water intensive crops, a major upstream dam project for the Nile basin, and rising groundwater levels pushing at pharaoh-era monuments will be pressing issues for the next Egyptian president – whether military or civilian.

As criticism continues over the military’s heavy-handedness to quell protests, little attention is being given to the late January announcement by Egypt’s minister of irrigation and water resources on the growing severity of the country’s water shortage: share of water per citizen stands at 640 cubic metres, compared with an international standard of 1,000.

The minister said he expected this amount to decrease to 370 cubic metres by 2050 due to a rapidly growing population.

“Many people need to start measuring how much water they use, but it’s hard to break traditions here.”

A scientist working in the water resources sector expressed cautious hope to IPS that “the military is one of the few institutions that can actually get things done.” But he added: “That said, they were in power for a long time and didn’t do anything.”

Improving irrigation practices and countering the demographic explosion are some of the most commonly cited actions to be considered, as well as reducing the use of pesticides and improving sewage and waste disposal systems to prevent contaminating the limited water supplies available.

Attempting to lessen the population’s consumption of sugar would also be beneficial, experts say, not only in terms of water supplies but also public health.

Hugely popular juice pressed from water-intensive sugarcane can be found on street corners across Egypt, with inhabitants swearing by its “kidney-cleansing” properties. Ubiquitous coffee and tea gets steeped in sugar.

Diabetes levels have risen by 83 percent over the past 15 years, but little attempt is made to inform the public of the health-related risks or stem the preponderance of sugarcane production.

Egypt’s agriculture sector consumes well over 80 percent of the country’s annual water resources and sugarcane accounts for a large portion, alongside rice and cotton.

Rice production has been banned by the government in some areas for its heavy water requirements, though it commands a high price on the international market, is a staple for the population, and a certain quantity helps control soil salinity and limits saltwater intrusion in the Delta.

Egypt is instead the world’s largest importer of wheat and buys over half of its requirements from abroad, much of which goes into subsidised bread for the quarter of its 84 million people who live below the poverty line of 1.65 dollars a day.

A serious issue is that outdated irrigation practices are still in use, Hussein Jeffrey John Gawad, a hydro-geologist working as a consultant in Egypt, told IPS.

“Because there was always an abundance of water before, they just continue flooding the farms,” he said. “Many people need to start measuring how much water they use, but it’s hard to break traditions here.”

In certain areas of the country, it is instead an excess of water that is causing problems. The most traditional face of Egypt to the world – and its main magnet for tourism, a sector that accounted for more than a tenth of Egypt’s GDP prior to the 2011 uprising – may be in danger as well, Gawad noted, due to rising groundwater around the country’s ancient monuments.

As the population swells, agriculture increasingly encroaches on areas near important monuments, bringing with it artificial irrigation channels to which chemical fertilisers are added, thereby increasing salinity levels and seeping into limestone foundations, weakening them.

A rise in the water table around the Osireion – the only remaining visible tomb in Abydos, one of Egypt’s most important archaeological sites – has made it largely inaccessible due to inundation of sand and flooding.

Gawad said that at one point the government had tried to install a “dewatering” system, “but now there is literally zero government attention to this.”

At some sites, pumps and drainage pipes have been set up, with varying levels of success. An international rescue effort led by United Nations Educational, Scientific and Cultural Organisation in the 1960s saved the enormous blocks of the Abu Simbel temples from being submerged by relocating them onto an artificial hill during the construction of the Aswan Dam.

However, the more gradual but relentless weakening of temple foundations and steady erosion of carvings and ancient paintings has not drawn similar attention.

Meanwhile, Ethiopia’s diversion of the Blue Nile as part of its massive Renaissance Dam project looms large over any discussion of Egypt’s future water supplies.

As part of colonial-era agreements, Egypt long held rights to the vast majority of the Nile’s waters. In mid-2010, however, five upstream countries – Ethiopia, Uganda, Kenya, Tanzania, and Rwanda, with Burundi joining in the following year – signed a treaty to share the dam’s resources, formally launching the project in April 2012.

“Ethiopia has the right to use the water flowing through their lands,” Gawad said, “but the policy of the Egyptian government is to not grant them that right. They stick by colonial-era mandates when it is convenient, and throw them by the wayside when it is not.”

A study by the International Fund for Agricultural Development found in 2005 that 98 percent of Egyptian agriculture was irrigated with Nile water or pumped from aquifers renewed by the Nile River flow. Under former president Mohammed Morsi, there was talk of “going to war” if the dam project were to be completed, but officials have since said this option has been ruled out.

Journalists have been arrested for questioning the merits and funding of the dam in Ethiopia, and the country shows no willingness to consider alternative options. Few reliable studies have been carried out on the potential effects of the project, but reducing the amount of water flowing into the water-strapped nation further downstream will inevitably pose risks to its economy and, as a result, its stability.