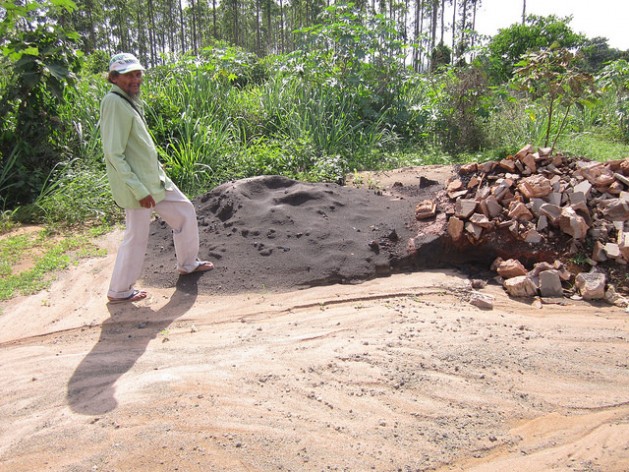 Florencio de Souza Bezerra points with his foot to a mound of dangerously inflammable charcoal dust on a roadside in Piquiá de Baixo. Credit: Mario Osava/IPS

PIQUIÁ DE BAIXO, Brazil, Feb 10 2014 (IPS) - “My nephew was eight years old when he stepped in the ‘munha’ [charcoal dust] and burned his legs up to the knees,” said Angelita Alves de Oliveira from a corner of Brazil’s Amazonia that has become a deadly hazard for local people.

Treatment in faraway hospitals did not save the boy’s life, because “his blood had become toxic, the doctor said,” said Oliveira, 61, who has been working as a teacher for the last 30 years. “My sister was never the same after she lost her youngest child.”

Oliveira’s own husband suffered from similar burns, as the scars on his legs show.

"An examination a year ago showed shadows on my lungs, and the doctor accused me of being a long-time smoker, but I have never touched a cigarette.” -- Angelita Alves de Oliveira

“Munha” is pulverised charcoal waste left over from the production of pig-iron, an intermediate in steel production. It has made the village of Piquiá de Baixo, in the Brazil’s eastern Amazon region, a tragic case study in industrial pollution.

Piquiá is a rural village in Açailandia municipality in the state of Maranhão, which grew out of workers’ camps set up in 1958 to build the Belém-Brasilia highway, a major axis of development and integration in the centre-north of Brazil, which was responsible for several environmental and social disasters.

The railway that opened in 1985 to transport iron ore from the huge mining province of Carajás sealed the fate of Açailandia as a logistics crossroads and steel industry hub. Piquiá de Baizo was hemmed in by five pig-iron plants, the railway and large mining storehouses.

Making charcoal to feed the steel furnaces was added to traditional cattle ranching, and transformed Açailandia into a focal point for deforestation and slave labour.

These blights have receded in the face of state persecution and various pressures. But pollution in Piquiá has worsened, according to the testimonies of people interviewed by IPS.

Pulverised charcoal waste is still a menace. Dryness makes it inflammable at the lightest touch. This is what cost Oliveira’s nephew his life in 1993, when few people knew how lethal the black dust was. 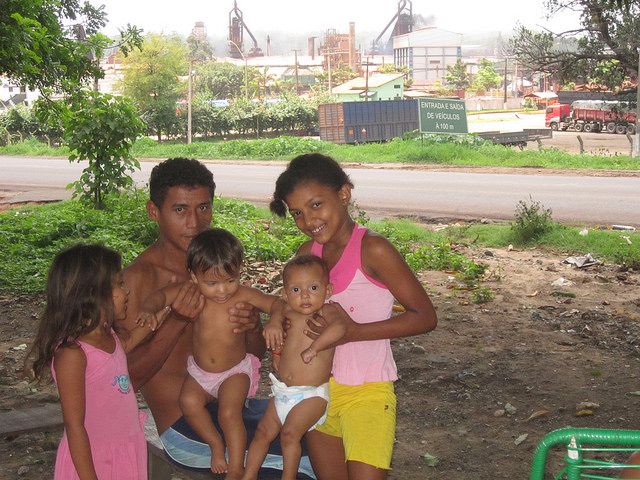 A family smiles for the camera from the shade of a tree. The highway separates them from the pig-iron plants that are making like impossible in their neighbourhood. Credit: Mario Osava/IPS

People took heed and accidents have become less frequent, but they have not been eradicated. A child of seven was burned to the waist in 1999 and died three weeks later.

“I have seen cows incinerated,” said Florencio de Souza Bezerra, who used to be a small-scale farmer and is now an active member of the Piquiá Residents Community Association. He has lived in Piquiá for 10 years with his nine children and two grandchildren, in a big wooden house with a large yard.

Mounds of munha can be seen in the streets where the steel plant trucks pass, and in at least one unroofed materials storehouse that IPS was able to enter unrestricted.

But the most frequent complaint of local people is the air pollution. “Just over a year ago a girl died from iron dust in her lungs and cancer, after 15 days in intensive care,” said Bezerra.

In the village square, he points out the houses where residents have died of respiratory illnesses.

Oliveira said “an examination a year ago showed shadows on my lungs, and the doctor accused me of being a long-time smoker, but I have never touched a cigarette.” She wants to “give life and hope” to her grandchildren, who live here “exposed to pollution 24 hours a day.”

“I have lived a long time, but my grandchildren haven’t,” said Oliveira. Her house is next to the Gusa Nordeste plant, one of the five industrial units that produce pig-iron.

The situation worsened “two years ago,” she said, when the company started producing cement. Now it spreads clouds of black dust that cover everything in seconds and, some mornings, make her house invisible from the main road, only 30 metres away.

For the company this has spelled progress, as they can use blast furnace slag as an input for cement production, avoiding bulky waste and providing the local construction market with a product that formerly had to be hauled in from a long way away.

Gusa Nordeste proclaims that it is being responsible for the environment because it uses munha as a fuel, saving granulated charcoal, and utilises gas derived from pig-iron production to generate all its electrical energy needs.

But the truth, recognised by the justice system, several authorities and the industry itself, is that air, water and soil pollution have made it impossible for the people of Piquiá de Baixo to continue to live where they have been for over four decades.

A proposal to resettle the 312 families living in Piquiá de Baixo on 38 hectares of land six kilometres from its present location has been approved by the justice system and the municipal council.

In December, justice authorities ordered the expropriation of the land and valued it at the equivalent of 450,000 dollars, but the owner is demanding four times that sum, so the residents of Piquiá are still waiting.

The community has come up with its own urban project, including the designs for the houses, the school, the square, shops and churches, said Antonio Soffientini, a member of Justice on the Rails, a network of dozens of organisations supporting those affected by the Carajás mining region. 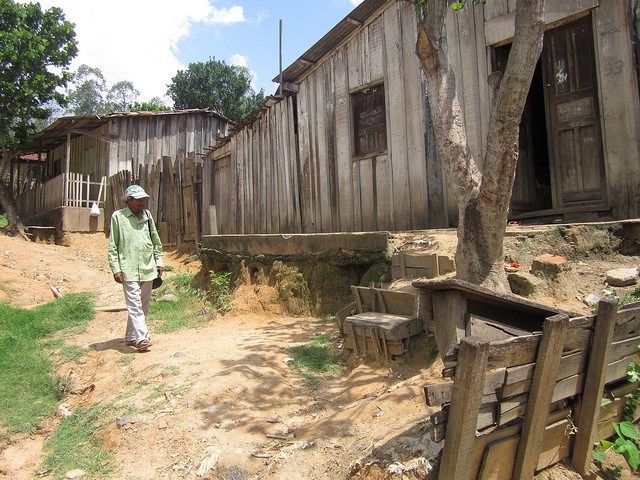 In the mountain range of Serra dos Carajás, the giant mining company Vale extracts close to 110 million tonnes of iron ore a year. The ore is transported by rail 892 kilometres to the port of Ponta da Madeira in São Luis, the capital of Maranhão, to be exported.

A small proportion of the iron ore remains in Açailandia. As the supplier to the local pig-iron industry, Vale has direct responsibility for the pollution, according to Justice on the Rails.

“Vale could stop supplying ore until the industry instals filters and puts an end to the dreadful situation in Piquiá,” said Soffientini, an Italian member of the Catholic order of Comboni missionaries.

This steelmaking hub has already experienced a decline in activity since 2008. The 6,000 jobs it provided then have fallen to 3,500 today, according to Jarles Adelino, the president of the Açailandia metalworkers union.

The union leader complained of the high price charged by Vale for its iron ore, which amounts to half the cost of pig-iron production.

However, the declining activity is not apparent in the city of Açailandia, with its hotels filled to capacity and other signs of prosperity. Several plants in the surrounding area offer temporary work, said Adelino, and each position at a pig-iron plant generates 10 indirect jobs.